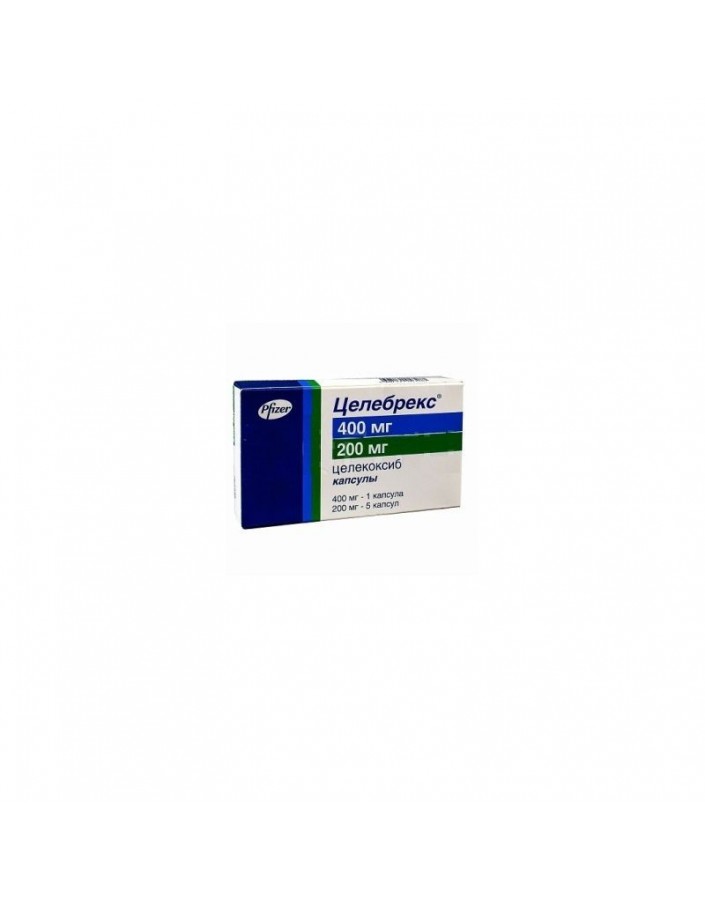 - pain syndrome (back pain, musculoskeletal, postoperative and other types of pain);

On the part of the kidneys and urinary system: urinary tract infection.

From the blood: anemia, ecchymosis, thrombocytopenia.

From the digestive tract: vomiting.

From the skin: alopecia, urticaria.

Are common: swelling of the face.

Side effects identified in post-marketing observations:

From the side of the vessels: vasculitis, cerebral hemorrhage.

From the digestive tract: Gastrointestinal bleeding.

From the reproductive system: violation of the menstrual cycle, decrease in fertility in women (see the section "Use during pregnancy and during breastfeeding").

- hypersensitivity to celcoxibu or any other component of the drug;

- bronchial asthma, urticaria, or allergic reactions after taking Acetylsalicylic acid or other NSAIDs, including other COX-2 inhibitors;

- state after surgery of aorto-coronary shunting;

- peptic ulcer in the acute stage or gastrointestinal bleeding;

- severe hepatic and renal failure (no experience of use);

Celebrex should be taken carefully under the following conditions:

- Diseases of the gastrointestinal tract (peptic ulcer, bleeding in history), the presence of Helicobacter pylori infection;

- diseases of the cardiovascular system (see the section "Special Instructions");

- simultaneous ameneniya with inhibitors of an isoenzyme CYP2C9;

- patients who are slow metabolizers or are suspected of having such a condition;

There are insufficient data on the use of celecoxib in pregnant women. The potential risk of using the drug Celebrex during variability has not been established, but cannot be excluded.

There is limited evidence that celecoxib is excreted in breast milk. Studies have shown that celecoxib is secreted into breast milk at very low concentrations. However, taking into account the potential for side effects of celecoxib in an infant being fed, the feasibility of canceling either breastfeeding or taking celecoxib should be evaluated, given the importance of taking Celebrex® for mother.

Contraindicated in children under 18 years old

Elderly patients usually do not need dose adjustment. However, in patients with a body weight below 50 kg, it is better to begin treatment with the lowest recommended dose.

Celebrex, given the antipyretic effect, can reduce the diagnostic significance of a symptom such as fever and affect the diagnosis of infection.

Effect on the cardiovascular system

With the use of NSAIDs (selective COX-2 inhibitors) in patients after surgery for coronary artery bypass surgery for the treatment of pain in the first 10-14 days, it is possible to increase the incidence of myocardial infarction and cerebral circulation disorders.

Like all NSAIDs, celecoxib can lead to an increase in blood pressure, which can also be a cause of complications of the cardiovascular system. All NSAIDs, including celecoxib, in patients with arterial hypertension should be used with caution. Blood pressure monitoring should be performed at the start of celecoxib therapy, as well as during the course of treatment.

Effect on the digestive tract

Combined use with Warfarin and other anticoagulants

It was reported about serious (some of them fatal) bleeding in patients who received concomitant treatment with warfarin or similar means. Since an increase in prothrombin time was reported, after the start of treatment with Celebrex® or changes in its dose should be controlled anti-coagulant activity.

As with the use of other drugs that inhibit the synthesis of prostaglandins in a number of patients taking Celebrex®, fluid retention and edema can occur, so care should be taken when using this drug in patients with conditions that predispose or worsen due to fluid retention. Patients with a history of heart failure or arterial hypertension should be closely monitored.

NSAIDs, including celecoxib, can have a toxic effect on kidney function. It was found that celecoxib is not more toxic than other NSAIDs. Celebrex® should be used with caution in patients with impaired renal function, heart failure, impaired liver function and in elderly patients. Renal function in these patients should be carefully monitored.

Caution must be exercised when using the drug Celebrex.® in patients with dehydration. In such cases, it is advisable to first rehydrate, and then begin therapy with Celebrex.®.

In some cases, severe reactions of the liver were observed, including fulminant hepatitis (sometimes fatal), liver necrosis, liver failure (sometimes fatal or the need for liver transplantation). Most of these reactions developed 1 month after starting celecoxib.

When taking the drug Celebrex®Anaphylactic reactions have been reported.

It has been extremely rare for celecoxib to have severe skin reactions, such as exfoliative dermatitis, Stevens-Johnson syndrome, and toxic epidermal necrolysis, some of which were fatal. The risk of such reactions is higher in patients at the beginning of therapy; in most cases noted, such reactions began in the first month of therapy. You should stop taking the drug Celebrex® with the appearance of skin rash, changes in the mucous membranes or other signs of hypersensitivity.

Influence on the ability to drive a car and control mechanisms

The effect of celecoxib on the ability to drive a car and control mechanisms has not been investigated. However, based on the pharmacodynamic properties and the overall safety profile, it seems unlikely that Celebrex® has such an effect.

If overdose is suspected, appropriate supportive care should be provided. Presumably dialysis is not an effective method of removing the drug from the blood, due to the high degree of drug binding to plasma proteins.

In vitro studies have shown that celecoxib, although not a substrate of the CYP2D6 isoenzyme, inhibits its activity. Therefore, there is the likelihood of drug interactions in vivo with drugs whose metabolism is associated with CYP2D6 isofermeitis.

Warfarin and other anticoagulants: with simultaneous admission may increase prothrombin time.

Fluconazole, Ketoconazole : with the simultaneous use of 200 mg of Fluconazole once a day there is a 2-fold increase in plasma celecoxib concentration. This effect is associated with inhibition of celecoxib metabolism by fluconazole via the CYP2C9 isoenzyme. Patients taking flucoiazole (an inhibitor of the CYP2C9 isoenzyme) celecoxib should be used at the lowest recommended dose (see the section “Dosage and administration”). Ketoconazole (an inhibitor of the CYP3A4 isoenzyme) has no clinically significant effect on celecoxib metabolism.

Diuretics: previously known NSAIDs in some patients may reduce the natriuretic effect of Furosemide and thiazides by reducing renal synthesis of prostaglandins, this should be borne in mind when using celecoxib.

Oral contraceptives: No clinically significant effect on the pharmacokinetics of the contraceptive combination was noted (1 mg norethisterone / 35 μg ethinyl estradiol).

Lithium: There was an increase in plasma lithium concentration by about 17% when co-taking lithium and celecoxib. Patients receiving lithium therapy should be closely monitored when taking or canceling celecoxib. Other NSAIDs: the simultaneous use of celecoxib and other NSAIDs (not containing acetylsalicylic acid) should be avoided.

Other drugs: there were no clinically significant interactions between celecoxib and antacids (aluminum- and magnesium-containing drugs), Omeprazole, Methotrexate, glibenclamide, phenytoin, or tolbutamide.