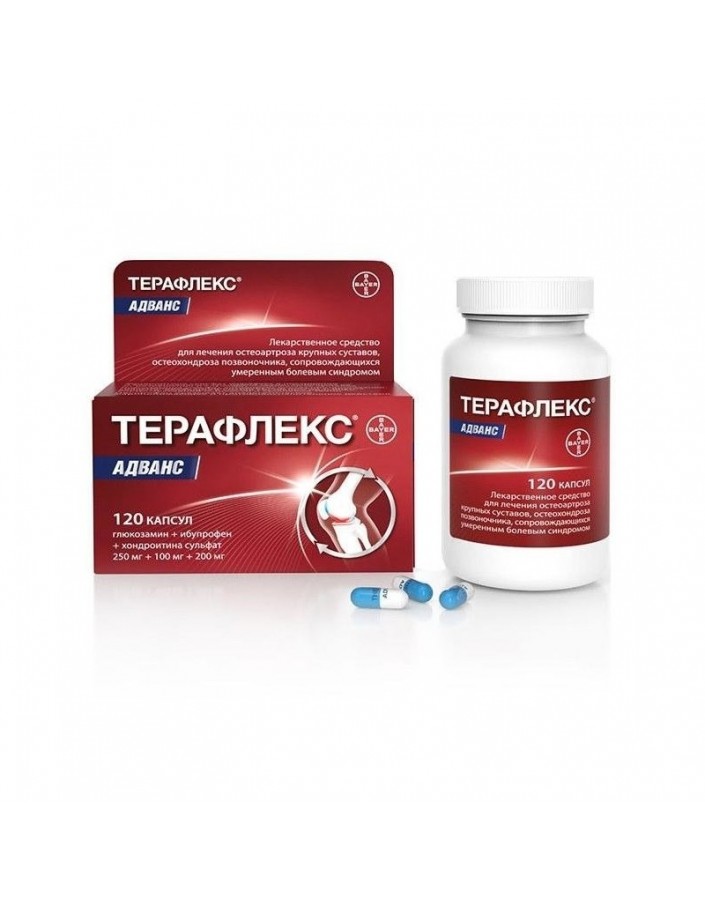 1Chondroitin sodium sulfate is contained in the form of a 90% substance, taking into account the 10% loss in mass during drying and the excess - 241 mg;

Opaque hard gelatin capsules of size 0, consisting of two parts: a blue cap and a white casing with the inscription in blue “THERAFLEX ADVANCE”, filled with a white or almost white powder with a faint odor.

Chondroitin sulfate is involved in the construction and restoration of cartilage, protects it from destruction and improves joint mobility.

Glucosamine sulfate activates the synthesis of proteoglycans, hyaluronic, chondroitin sulfuric acids and other substances that make up the articular membranes, intra-articular fluid and cartilage tissue.

Ibuprofen is a derivative of propionic acid and has analgesic, antipyretic and anti-inflammatory effects due to the non-selective blockade of cyclooxygenase 1 and 2. The glucosamine sulfate and chondroitin sulfate preparations potentiate the analgesic effect of ibuprofen.

The oral bioavailability of glucosamine is 25% (the effect of “first passage” through the liver), the highest concentrations are found in the liver, kidneys and articular cartilage. About 30% of the accepted dose persists for a long time in bone and muscle tissue.Excreted predominantly with urine unchanged, partially with feces. The half-life is 68 hours.

More than 70% of chondroitin sulfate is absorbed in the digestive tract. Bioavailability is about 13%. With a single ingestion of the average therapeutic dose, the maximum concentration in plasma is noted after 3-4 hours, in synovial fluid after 4-5 hours. Absorbed in the gastrointestinal tract drug accumulates in the synovial fluid. Excreted by the kidneys.

Ibuprofen is well absorbed from the stomach. Тmax - about 1 hour. Ibuprofen is approximately 99% bound to plasma proteins. It is slowly distributed in the synovial fluid and is removed from it more slowly than from plasma. Ibuprofen is metabolized in the liver mainly by hydroxylation and carboxylation of the isobutyl group. CYP2C9 isoenzyme is involved in the metabolism of the drug. After absorption, about 60% of the pharmacologically inactive R-form of ibuprofen slowly transforms into the active S-form. Ibuprofen has a biphasic elimination kinetics. The half-life (T1 / 2) of plasma is 2-3 hours. Up to 90% of the dose can be detected in the urine as metabolites and their conjugates. Less than 1% is excreted unchanged in the urine and, to a lesser extent, in the bile. Ibuprofen is completely excreted in 24 hours.

Osteoarthritis of large joints, osteochondrosis of the spine, accompanied by moderate pain syndrome.

Erosive and ulcerative diseases of the organs of the gastrointestinal tract (including peptic ulcer of the stomach and duodenum in the acute stage, Crohn's disease, ulcerative colitis).

A complete or incomplete combination of asthma, recurrent nasal polyposis and paranasal sinuses.

Hemophilia and other bleeding disorders (including hypocoagulation), hemorrhagic diathesis.

Not recommended for use during pregnancy and during breastfeeding.

Inside Adults use 2 capsules 3 times a day after meals. Capsules are taken orally with a small amount of water. The duration of admission without consulting a doctor should not exceed 3 weeks. Further use of the drug should be agreed with the doctor.

Consideration should be given to the possibility of adverse reactions associated with ibuprofen present in the preparation.

Gastrointestinal tract (GIT): NSAID gastropathy (abdominal pain, nausea, vomiting, heartburn, loss of appetite, diarrhea, flatulence, constipation; rarely, ulceration of the gastrointestinal mucosa, which in some cases is complicated by perforation and bleeding); irritation or dryness of the oral mucosa, pain in the mouth, ulceration of the mucous membrane of the gums,aphthous stomatitis, pancreatitis.

Inhibitors of microsomal oxidation reduce the risk of hepatotoxic action.

Reduces the hypotensive activity of vasodilators (including slow Calcium channel blockers and ACE inhibitors), natriuretic and diuretic - Furosemide and hydrochlorothiazide.

Antacids and colestyramine reduce the absorption of ibuprofen.

When administered with anticoagulant and thrombolytic drugs (alteplazy, streptokinase, urokinase), the risk of bleeding increases at the same time.

Cyclosporine and gold preparations enhance the effect of ibuprofen on the synthesis of prostaglandins in the kidneys, which is manifested by an increase in nephrotoxicity.Ibuprofen increases the plasma concentration of cyclosporine and the likelihood of its hepatotoxic effects.

In connection with the content of glucosamine in the preparation, it is possible to reduce the effectiveness of hypoglycemic drugs, doxorubicin, teniposide, etoposide. Glucosamine increases the absorption of tetracyclines, reduces the effect of semi-synthetic penicillins, chloramphenicol.

During long-term treatment, it is necessary to control the picture of peripheral blood and the functional state of the liver and kidneys.

During treatment, alcohol is not recommended.