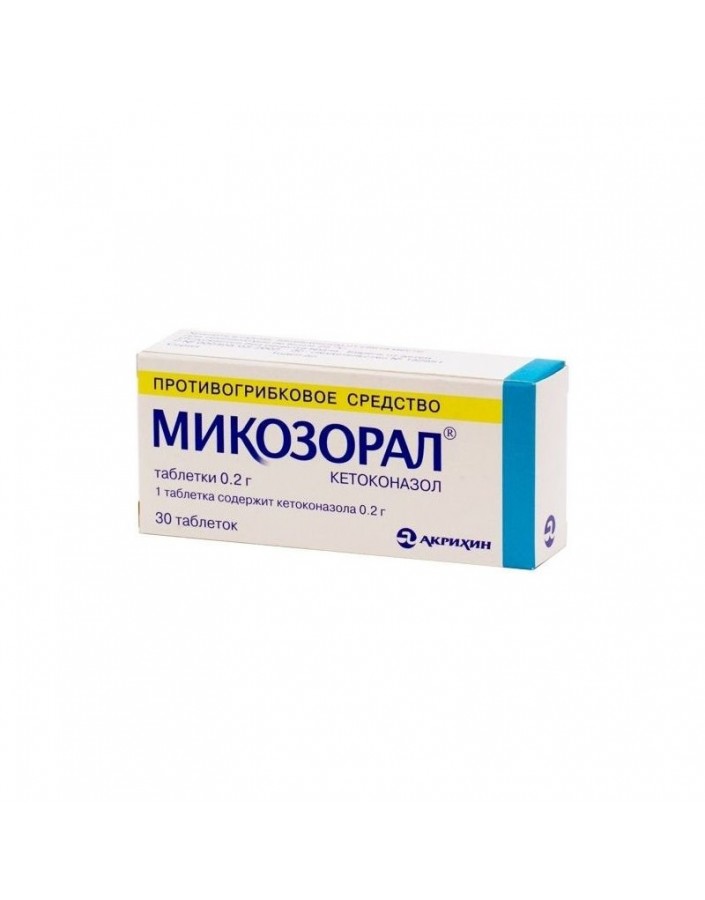 Description: pills of white or white with a creamy or grayish shade of color, flat-cylindrical, with a facet and risky. The presence of "marbling".

Pharmacodynamics
Ketoconazole is a synthetic imidazoldioxolane derivative, which has a fungicidal or fungistatic effect against dermatophytes, yeast-like (Candida, Pityrosporum, Topulopsis, Cryptococcus), dimorphic fungi, and higher fungi (eumicets). Less sensitive to ketoconazole, Aspergillus spp., Sporothrix schenckii, other Dermatiacceae, Mucor spp. and other phycomycetes, with the exception of Entomophthorales.
Ketoconazole inhibits ergosterol biosynthesis in fungi, which leads to changes in the composition of lipid components in the membranes.

Pharmacokinetics
The average maximum concentration of ketoconazole in plasma (3.5 mg / ml) is achieved within 1-2 hours after a single oral dose of 200 mg of the drug during a meal.Removal from plasma is biphasic: during the first 10 hours the half-life is 2 hours, and subsequently - 8 hours. Following absorption from the gastrointestinal tract, ketoconazole is converted into a large number of inactive metabolites. The main metabolic pathways are the oxidation and cleavage of the imidazole and piperazine rings, oxidative O-dealkylation and aromatic hydroxylation. About 13% of the dose is excreted in the urine, of which from 2 to 4% is unchanged drug. The drug is excreted mainly with bile through the gastrointestinal tract. In vivo binding to plasma proteins, mainly with the albumin fraction, is 99%. Only a small part of the drug penetrates into the cerebrospinal fluid.

Contraindications
Acute and chronic diseases of the liver, kidneys, hypersensitivity to the components of the drug.
With caution - pregnancy, lactation, age over 50 years (women), the simultaneous reception of potentially hepatotoxic drugs, insufficiency of the adrenal cortex and pituitary.

Dosage and administration
Mycozoral should be taken orally to improve the absorption of the drug - during meals.
Treatment.
Adults and children weighing more than 30 kg:
- fungal lesions of the skin, gastrointestinal tract and systemic mycoses: it is recommended to take 1 pill (200 mg) of mycoralum per day. If there is no adequate response to this dose, you can increase the dose to 2 pills (400 mg) once a day.
- Vaginal candidiasis: 2 pills (400 mg) once a day, for 5 days.
Children weighing 15 to 30 kg: 1/2 pills (100 mg) per day.
Treatment according to the above scheme should be carried out for at least a week after the disappearance of all symptoms until negative results of microbiological studies are obtained.
Prophylactic use in patients with immunodeficiency :
adults - 2 pills (400 mg) per day;
children - 4-8 mg / kg of body weight per day, but not more than 400 mg.
The average duration of treatment is:
- vaginal candidiasis - 5 days;
- skin mycoses caused by dermatophytes - about 4 weeks;
- versicolor versicolor - 10 days;
- candidiasis of the skin and oral cavity - 2-3 weeks;
- Fungal lesions of the scalp - 1-2 months;
- fungal nail infections - 6-12 months;
- systemic candidiasis - 1-2 months;
- paracoccidioidomycosis, histoplasmosis, coccidioidomycosis - the optimal duration of treatment is 3-6 months.

Side effect
The most common side effects associated with taking ketoconazole are disorders of the gastrointestinal tract, such as dyspepsia, nausea, abdominal pain, diarrhea. Less common - headache, insomnia, arthralgia, fever, reversible increase in the activity of "liver" enzymes, menstrual disorders, dizziness, photophobia, paresthesia, hypercreatininemia, and allergic reactions (urticaria, skin rash, fever), arthralgia, exant.
Side effects that occur in very rare cases include thrombocytopenia, alopecia, impotence, and a reversible increase in intracranial pressure (edema of the optic nerve discs, protrusion of fontanelles in children).
When using the drug in doses exceeding the recommended therapeutic (200 or 400 mg per day), in rare cases there was a reversible gynecomastia and oligospermia, decreased libido.
When taking a therapeutic dose of 200 mg once a day, a temporary decrease in plasma testosterone levels can be observed.
It was reported about the occurrence of toxic hepatitis in the period of receiving ketoconazole.
With the rapid cessation of treatment, this reaction is reversible.

Overdose
In case of accidental overdose, it is recommended to induce vomiting during the first hour after poisoning, flush the stomach and take activated charcoal. Careful monitoring of the patient’s condition and symptomatic treatment is required. There is no specific antidote.
Interactions with other drugs
Drugs that affect the metabolism of Mykozoral:
- rifampicin, rifabutin, Carbamazepine, isoniazid and phenytoin significantly reduce the bioavailability of ketoconazole;
- drugs that affect the acidity of gastric juice;
- ritonavir increases the bioavailability of ketoconazole, as a result, when taken together it is necessary to reduce the dose of mycoralos.
Mycozoral can enhance or prolong the action of drugs that are metabolized with the participation of cytochrome P 450, especially from the СYRZA group.
Examples of such drugs are:
- Preparations that can not be prescribed during the course of treatment with myco-oral: terfenadine, astemizole, cisapride, triazolam, oral forms of midazolam, quinidine, pimozide, cleaved by the enzyme СYРЗА4, HMG-CoA reductase inhibitors such as Simvastatin and lovastatin.
- Drugs, the appointment of which is necessary to monitor their concentration in plasma, action, side effects. Their dosage when administered jointly with mycoralis should be reduced if necessary:
- Oral anticoagulants.
- HIV protease inhibitors, such as indinavir, saquinavir.
- Some anticancer drugs such as Vinca Pink alkaloids, docetaxel .
- Metabolizing with the participation of the enzyme СYРЗА4 Calcium channel blockers.
- Some immunosuppressive agents: cyclosporine.
- Other drugs: Digoxin, carbamazepine, buspirone, Sildenafil, alprazolam, midazolam, rifabutin, methylprednisolone.
In exceptional cases, a disulfiram-like reaction to alcohol has been reported, characterized by redness, rash, peripheral edema, nausea and headache. All symptoms disappear completely within a few hours.
Reduced acidity: in this state, the absorption of the drug worsens.
Patients taking antacid drugs, such as aluminum hydroxide, should be taken no earlier than 2 hours after taking mycoralized. Patients with achlorhydria or patients taking drugs that suppress the secretion of hydrochloric acid in the stomach (for example, H2 - histamine receptors or “proton pump inhibitors”), it is advisable to take mycoral with acidic drinks.
Mycozoral weakens the effect of amphotericin B.
Reduces the stimulating effect of corticotropin on the adrenal glands.
Increases the risk of bleeding "breakthrough" while taking oral contraceptives with a low content of hormones.
Enhances the toxicity of phenytoin.

special instructions
In some cases, there is a slight, transient asymptomatic increase in the activity of hepatic transaminases or alkaline phosphatase. This reaction is not dangerous and does not require the mandatory cessation of treatment, however, such patients should be under special supervision.
If the duration of treatment with mycoral more than 2 weeks, it is necessary to monitor liver function: before the start of treatment, after two weeks and then monthly. In case of detection of abnormal liver function, treatment should be discontinued.
It is very important to familiarize patients who need long-term treatment with myco-oral with the symptoms of liver disease (fatigue, loss of strength, fever, urine darkening, fecal discoloration, jaundice). In the event of hepatitis symptoms or if liver function tests confirm liver disease, treatment should be stopped immediately.
In patients with adrenal insufficiency or borderline conditions, as well as in patients exposed to significant stress (surgical intervention), while taking the drug in a dose of 400 mg or more, adrenal function should be monitored.
Use during pregnancy and lactation
There are no studies on the use of mycozoral in pregnant women, therefore, it is not recommended to use the drug during pregnancy, with the exception of cases where the potential benefits of treatment for the mother may justify the possible risk to the fetus. Mikozoral penetrates into breast milk, breastfeeding is not recommended when taking the drug.
Impact on driving and other mechanisms
When treating the drug may dizziness, it is recommended to refrain from engaging in potentially hazardous activities.

Storage conditions
Store in a dry, dark place at a temperature not exceeding 25 ° C.
Keep out of the reach of children.