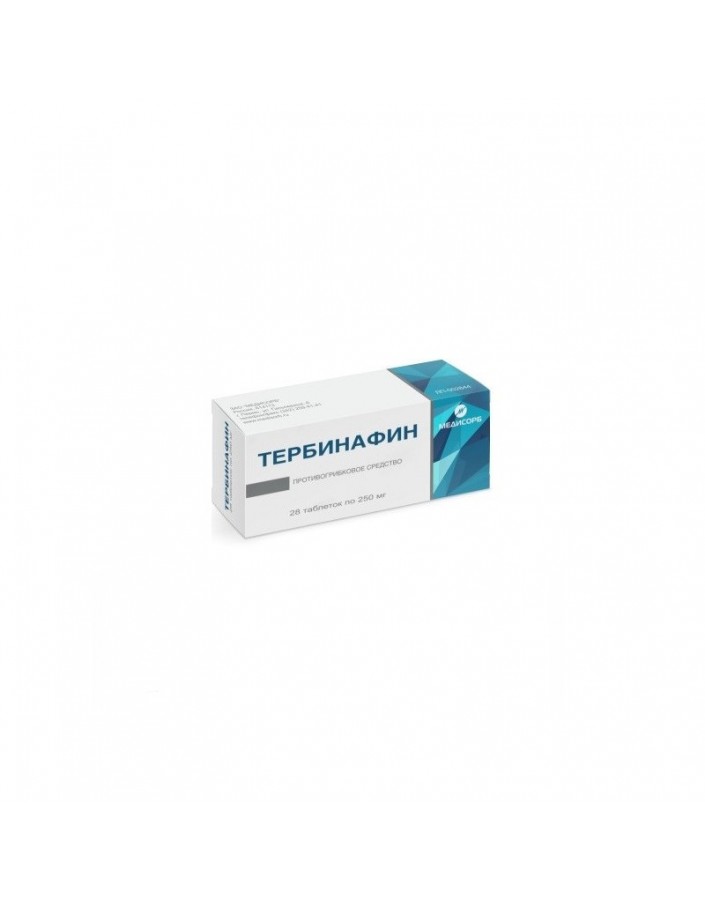 Terbinafine - antifungal agent. It has a broad spectrum of action against fungi that cause diseases of the skin, hair and nails, including:

- yeast fungi of the genus Candida (for example, C. albicans) and Pityrosporum.

In low concentrations, Terbinafine has a fungicidal effect against dermatophytes, molds and some dimorphic fungi. Activity against yeast fungi, depending on their species, can be fungicidal or fungistatic.

The mechanism of action is associated with the specific suppression of the early stage of sterol biosynthesis in the cell of the fungus. This leads to a deficiency of ergosterol and to the intracellular accumulation of squalene, which causes the death of the fungal cell. The action of terbinafine is carried out by inhibiting the enzyme squalene epoxidase in the cell membrane of the fungus. This enzyme does not belong to the cytochrome P450 system. Terbinafine does not have a significant effect on the metabolism of hormones or other drugs.

With the appointment of terbinafine inside the skin, hair and nails are concentrations of the drug, providing a fungicidal effect.

After a single dose of terbinafine orally at a dose of 250 mg, its maximum plasma concentration is reached after 2 hours and is 0.97 mcg / ml.The semi-absorption period is 0.8 hours, and the half-distribution period is 4.6 hours. Although the bioavailability of terbinafine is moderately changed under the influence of food, but not to such an extent that dose adjustment of the drug was required.

Terbinafine is metabolized rapidly and to a significant extent with the participation of at least seven cytochrome P450 isoenzymes, with the isoenzymes CYP2C9, CYP1A2, CYP3A4, CYP2C8 and CYP2C19 playing the main role. As a result of terbinafine biotransformation, metabolites are formed that do not possess antifungal activity and are excreted mainly in the urine. The final half-life is 17 hours. There is no evidence of cumulation of the drug in the body. There were no changes in plasma equilibrium concentration of terbinafine, depending on age, but in patients with impaired renal or liver function, the rate of excretion of the drug can be slowed down, which leads to higher concentrations of terbinafine in the blood.

With topical application of a spray or cream, less than 5% of the dose is absorbed, thus the systemic effect of the drug is minimal.

Irregular use of terbinafine or premature discontinuation of treatment can lead to a relapse of the disease. If after 2 weeks of treatment of a skin infection there is no improvement in the condition, it is necessary to re-determine the causative agent and its sensitivity to the drug. Systemic use in onychomycosis is justified only in the case of the defeat of most nails, the presence of pronounced subungual hyperkeratosis, the ineffectiveness of the previous local therapy. In the treatment of onychomycosis, the clinical response, confirmed by laboratory tests, is usually observed several months after mycological cure and cessation of the course of treatment, which is caused by the rate of regrowth of a healthy nail. Removal of nail plates in the treatment of onychomycosis of the hands for 3 weeks and onychomycosis of the feet for 6 weeks is not required.
In the presence of liver disease, the clearance of terbinafine can be reduced. During treatment, it is necessary to monitor the activity of liver transaminases in the serum.
In rare cases, after 3 months of treatment, cholestasis and hepatitis occur. If there are signs of abnormal liver function (weakness, persistent nausea, loss of appetite, excessive abdominal pain, jaundice, dark urine or discolored feces), the drug should be canceled.
Appointment of terbinafine to patients with psoriasis requires caution, because in very rare cases, terbinafine can cause an exacerbation of psoriasis. When treating with terbinafine, the general rules of hygiene should be followed to prevent the possibility of re-infection through underwear and shoes. In the process of treatment (after 2 weeks) and at the end of it, it is necessary to produce antifungal treatment of shoes, socks and stockings.

The duration of treatment depends on the indication and the severity of the disease.

Infections of the skin:

The complete disappearance of the manifestations of infection and complaints associated with it, can occur only a few weeks after mycological cure.

Infections of the hair and scalp:

Mycoses of the scalp are observed mainly in children.

The use of terbinafine in the elderly:
There is no reason to assume that elderly people need to change the dosage of the drug or that they have side effects that differ from those of younger patients. In the case of use in this age group of the drug in pills should consider the possibility of concomitant abnormal liver function or kidney.

The feeling of heaviness and pain in the epigastric region, a violation of taste, loss of appetite, nausea, diarrhea, cholestasis, neutropenia, thrombocytopenia, skin allergic reactions; burning sensation, redness of the skin and itching in the area of ​​application of the cream.

Treatment: gastric lavage followed by the use of Activated carbon . If necessary, conduct symptomatic therapy.