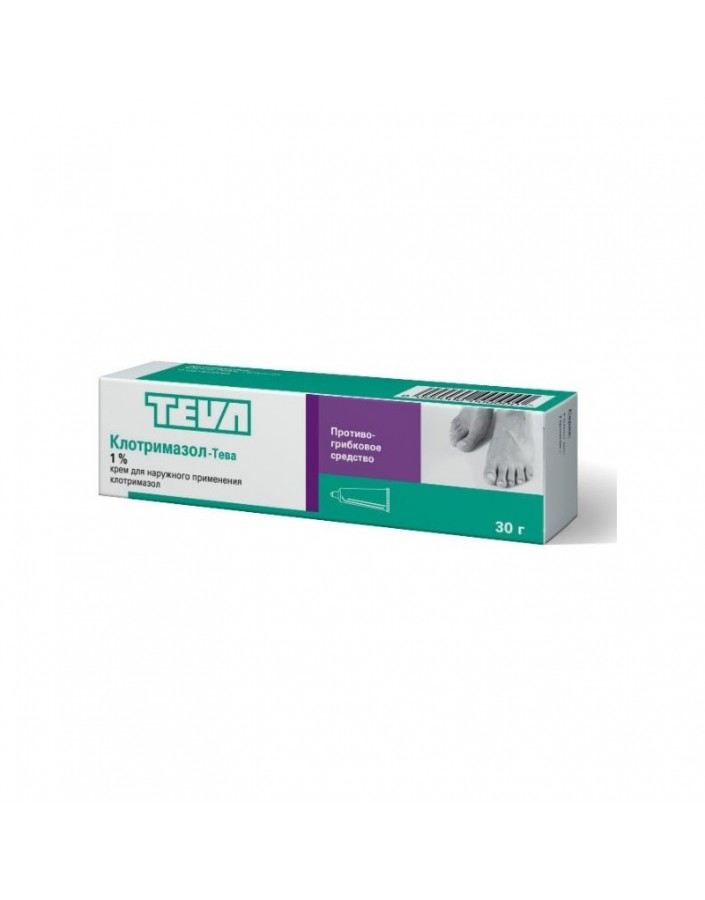 Clotrimazole is a broad-spectrum antifungal agent for topical use. The antimycotic effect of the active substance (imidazole derivative) is associated with impaired synthesis of ergosterol, which is part of the cell membrane of fungi, which changes the permeability of the membrane and causes the subsequent lysis of the cell. In small concentrations, it acts fungistatically, and in large concentrations - it is fungicidal, and not only on proliferating cells. In fungicidal concentrations, it interacts with mitochondrial and peroxidase enzymes, resulting in an increase in the concentration of hydrogen peroxide to a toxic level, which also contributes to the destruction of fungal cells.

Effective against dermatophytes, yeast-like and mold fungi, as well as the pathogen of multi-colored depriving Pityriasis versicolor (Malazessia furfur) and the causative agent of erythrasma. It has antimicrobial action against gram-positive (staphylococcus, streptococcus) and gram-negative bacteria (Bacteroides, Gardnerella vaginalis), as well as against Trichomonas vaginalis.

- fungal diseases of the skin, mycosis of skin folds, feet;

- pityriasis versicolor, erythrasma, superficial candidiasis caused by dermatophytes, yeast (including the genus Candida), mold and other fungi and pathogens sensitive to clotrimazole;

Outwardly. Apply a thin layer of ointment 2-3 times a day to pre-cleaned (using soap with a neutral pH value) and dry affected skin and gently rub it.

The duration of treatment depends on the severity of the disease, localization of pathological changes and the effectiveness of therapy.

Atfungal diseases of the skin of the feet therapy is recommended to continue for at least 2 weeks after the elimination of symptoms.

Itching, burning, tingling in places of application of ointment, the appearance of erythema, blistering, swelling, irritation and peeling of the skin. Allergic reactions (itching, urticaria).

- Hypersensitivity to clotrimazole or excipients;

- I trimester of pregnancy.

Contraindication - I trimester of pregnancy.

In clinical and experimental studies it was not established that the use of the drug during pregnancy or during breastfeeding has a negative impact on the health of the woman or the fetus (child).However, the question of the advisability of prescribing the drug should be decided individually after consulting a doctor.

Application of the drug directly on the lactating mammary gland is contraindicated.

Patients with liver failure should periodically monitor the functional state of the liver.

It is not recommended to apply the drug on the skin in the eye area. In the treatment of onychomycosis, it is necessary to ensure that the treated nail plates are cut short or have a rough surface for better penetration of the active substance. In these cases, preference should be given to the solution because of the best penetrating properties. Patients with liver failure should periodically monitor the functional state of the liver.

If there is evidence of hypersensitivity or irritation, treatment is stopped. If there is no effect for 4 weeks, the diagnosis should be confirmed.

The use of ointment in high doses does not cause any reactions and conditions, life-threatening.

Amphotericin B, Nystatin, natamycin reduce the effectiveness of clotrimazole with simultaneous use.

When applying the ointment, negative interactions with other agents are unknown and should not be expected, because The resorption ability of clotrimazole is very low.

At a temperature not higher than 20 ° С, in a dry place, protected from light and inaccessible to children. Freezing is not allowed.

Do not apply after the expiration date.