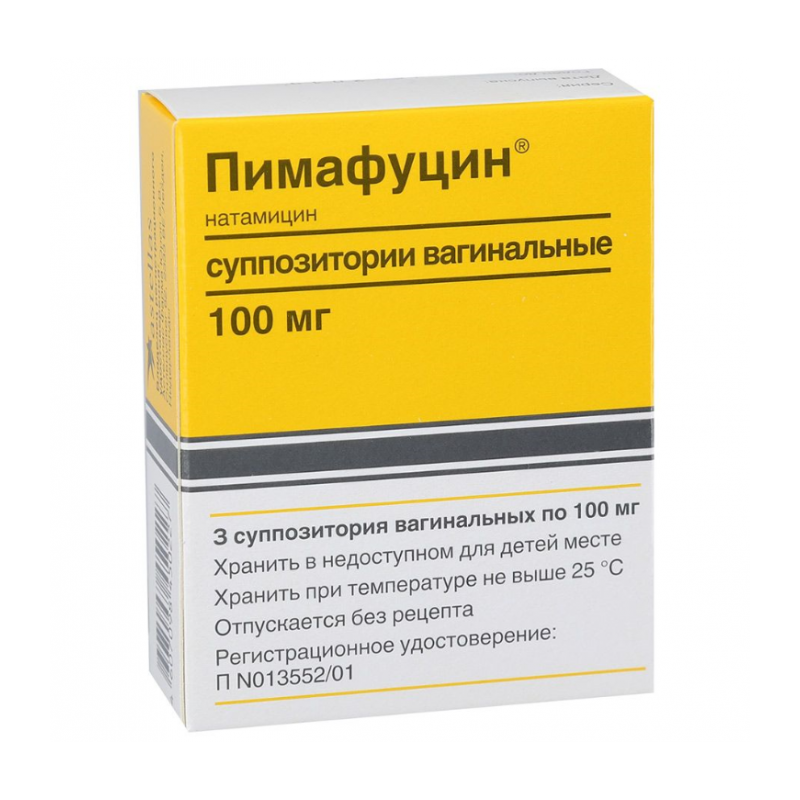 Antifungal polyene antibiotic of the macrolide group, which has a wide spectrum of action. It has a fungicidal effect.Natamycin binds sterols of cell membranes, violating their integrity and function, which leads to the death of microorganisms. To natamycinsensitive most pathogenic yeasts, especially Candida albicans.
Less sensitive to natamycin dermatophytes.
Natamycin resistance is not found in clinical practice.

When ingested, natamycin is practically not absorbed from the gastrointestinal tract. When applied to intact skin and mucous membranes, virtually no systemic absorption.

With intestinal candidiasis insidefor adults appoint 100 mg (1 tab.) 4 times / day on average for 1 week.For children appoint 100 mg (1 tab.) 2 times / day.
With ringworm (including candidiasis of the skin, diaper rash in children) cream is applied to the affected surface of the skin one or several times a day.
With otomycosis the affected surface is smeared with cream once or several times a day.Before using the drug, the ear is cleaned. After applying the drug, a tampon made of natural material (cotton, wool) is placed in the ear canal.
With vaginitis, vulvitis, vulvovaginitis prescribed 100 mg (1 vaginal suppository) for 6-9 days. The suppository is inserted into the vagina in the supine position, as deep as possible, 1 time per day at night.
With persistent vaginitis caused by Candida albicans, additionally prescribe the drug inside (1 tab. 4 times / day for 7-10 days) for the rehabilitation of the nidus of candidal infection in the intestine. For the treatment of candidal affection of the genital organs of the partner, use Pimafucin in the form of a cream.
With balanoposthitis cream is applied to the affected skin once or several times a day.
The duration of treatment is set individually. After the disappearance of the symptoms of the disease, it is recommended to continue the treatment for a few more days.

Gastrointestinal: possible nausea, diarrhea (occurring in the first days of taking the drug in the form of pills and passing independently during treatment).
Local reactions: possible slight irritation, burning sensation (when applying the cream, vaginal suppositories).

Perhaps the use of Pimafucin during pregnancy and lactation according to indications.

Vaginal suppositories under the action of body temperature quickly dissolve, forming a foamy mass, which contributes to the uniform distribution of the active substance.
In the case of a chronic or recurrent infection, local treatment may be supplemented by the administration of pills and a cream.
Pimafucin can be used as an additional drug in the treatment of ringworm with Griseofulvin.
Cetyl alcohol, which is part of vaginal suppositories, can cause hypersensitivity reactions.
During menstruation, suppository therapy is interrupted.
During the period of use of suppositories there is no need to exclude sexual contacts. However, it is recommended to conduct a survey of sexual partners and, in the event of a candidal lesion, conduct a course of treatment with Pimafucine. Also during the period of treatment should use barrier contraceptives.
Use in pediatrics
Pimafucin can be prescribed newborn.

To date, no cases of overdose of the drug Pimafucin have been reported. Prolonged use of Pimafucin does not adversely affect the skin or mucous membranes and the systemic effect is practically excluded. Accidental ingestion of a large amount of the drug should not cause any toxic effect, since absorption from the intestine is absent.

Drug interaction of the drug Pimafucin is not described.

The drug should be stored out of the reach of children at a temperature of 15 ° to 25 ° C.