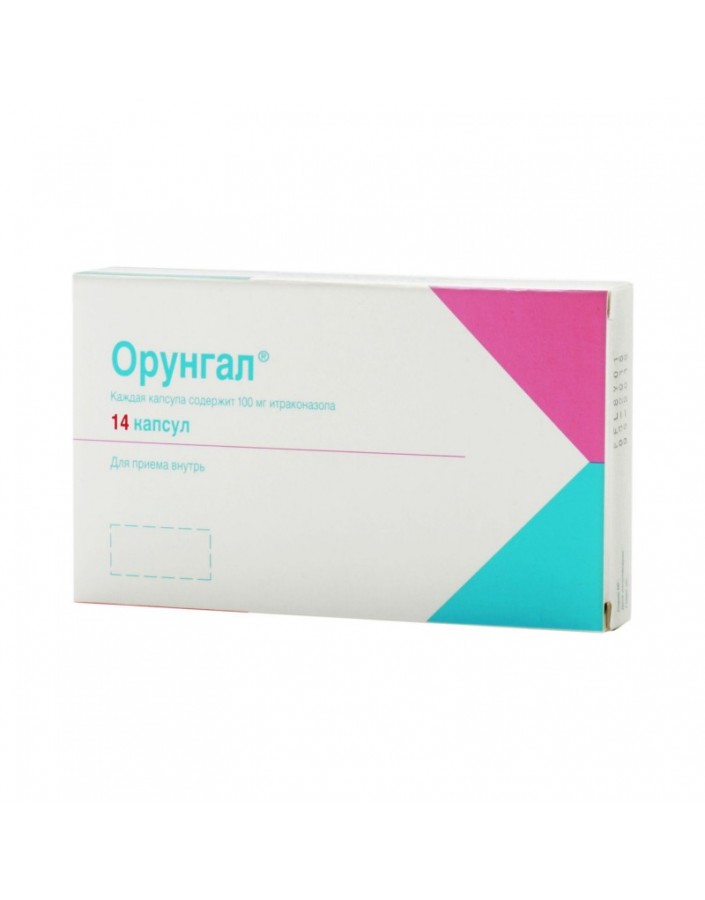 Capsules:
Treatment of mycoses caused by pathogens susceptible to the drug, including:
- dermatomycosis;
- fungal keratitis;
- onychomycosis caused by dermatophytes and / or yeast and mold fungi;
- systemic mycoses: systemic aspergillosis and candidiasis, cryptococcosis (including cryptococcal meningitis; in patients with immunodeficiency and in all patients with cryptocosis of the CNS Orungal should be prescribed only in cases where first-line drugs are not applicable in this case or are ineffective), histoplasmosis, sporotrichosis, paracoccidioidomycosis, blastomycosis and other systemic and tropical mycoses;
- Candidomycosis with damage to the skin and mucous membranes (including vulvovaginal candidiasis);
- deep visceral candidiasis;
- pityriasis versicolor.
Oral solution
- treatment of oral candidiasis and / or esophagus in HIV-positive patients and patients with immunodeficiency;
- prevention of systemic fungal infections in patients with malignant blood diseases or in patients with bone marrow transplantation with a high probability of neutropenia (less than 500 cells / μl).

Capsules should be taken immediately after a meal, swallow whole.
Recommended doses of Orungal, depending on the evidence are presented in Table 1.

Orungal should not be prescribed during pregnancy except in life-threatening cases and if the expected positive effect of therapy outweighs the possible risk to the fetus.
Data on the use of the drug Orungal during pregnancy is not enough. During the clinical use of the drug after registration, there were cases of congenital anomalies.Such cases included impaired development of vision, skeleton, urogenital and cardiovascular systems, as well as chromosomal abnormalities and multiple malformations. However, whether the use of the Orungal solution caused these disorders is not reliably established.
Epidemiological data on the exposure of Orungal in the first trimester of pregnancy, mainly in patients receiving short-term therapy for vulvovaginal candidiasis, did not reveal an increased risk of developing congenital anomalies compared with a control group not exposed to any of the known teratogenic factors.
Since itraconazole may be excreted in breast milk, if you need to use Orungal during lactation, breastfeeding should be stopped.
Women of childbearing age during the period of taking the drug, it is necessary to use adequate methods of contraception throughout the entire course of treatment until the onset of the first menstruation after its completion.

In a study on the IV medicinal form of the drug Orungal, a transient asymptomatic decrease in the left ventricular ejection fraction was noted, normalized until the next infusion of the drug. The clinical significance of the findings for oral dosage forms is unknown.
Itraconazole has a negative inotropic effect. Cases of congestive heart failure associated with taking Orungal have been reportedIn this connection, the drug should not be taken in patients with congestive heart failure or with the presence of this symptom complex in history, except in cases where the potential benefits far outweigh the potential risk. In an individual assessment of the balance between benefits and risks, the seriousness of the indications, the dosing regimen and the risk factors for congestive heart failure should be taken into account. Risk factors include the presence of diseases of the cardiovascular system, such as IHD or valvular heart disease; lung diseases such as obstructive pulmonary lesions; renal failure or other diseases associated with edema. Orungal treatment in this case should be carried out with caution, while it is necessary to monitor the symptoms and signs of congestive heart failure. If these signs or symptoms appear during the course of treatment, Orungal should be discontinued.
In patients with cystic fibrosis, inconstancy of therapeutic levels of itraconazole was observed with a constant intake of the solution in a dose of 2.5 mg / kg of body weight 2 times / day.
In very rare cases, with the use of Orungal, severe toxic liver damage developed (including cases of fatal liver failure). In most cases, this occurred in patients with already existing liver diseases, or in patients to whom the drug was prescribed to treat systemic diseases,having other serious diseases, also in patients who received other drugs that have a hepatotoxic effect. Some patients did not identify obvious risk factors for liver damage. Several of these cases occurred in the first month of therapy, and some in the first week of treatment. In this regard, it is recommended to regularly monitor liver function in patients receiving Orungal therapy. Patients should be warned of the need to immediately consult a doctor in case of symptoms that suggest the occurrence of hepatitis (anorexia, nausea, vomiting, weakness, abdominal pain and darkening of the urine). In the event of such symptoms, it is necessary to immediately stop orungal therapy and conduct a study of liver function. Patients with elevated levels of liver enzymes or liver disease in the active phase, or with toxic liver damage due to taking other drugs should not be prescribed Orungal unless the expected benefit justifies the risk of liver damage. In these cases, it is necessary to monitor the level of liver enzymes during treatment.
When Orungal is prescribed to patients with impaired liver and kidney function, due to the possibility of reducing the bioavailability of itraconazole, it is recommended to monitor plasma concentrations of itraconazole and, if necessary, adjust the dose of the drug.
Taking into account the increased risk of the rapid development of systemic candidiasis, Orungal should not be used as a means of initial therapy in patients with severe neutropenia.
In case of neuropathy caused by taking Orungal solution, treatment should be stopped.
Since clinical data on the use of Orungal in elderly patients is not enough, it is recommended that itraconazole solution be prescribed to patients of this age group only if the potential benefit outweighs the possible risk.
Use in pediatrics
Since clinical data on the use of Orungal solution in children is not enough, it is recommended to prescribe the drug to children only if the potential benefit outweighs the possible risk.
According to some reports, itraconazole is used in pediatric practice for the prevention of fungal infections in patients with neutropenia at a dose of 5 mg / kg of body weight when taken 2 times / day. Side effects, such as diarrhea, abdominal pain, fever, vomiting, mucositis (inflammation of the oral mucosa), were more common in children than in adults. However, it is difficult to establish reliably what is the cause of these adverse reactions (Orungal or simultaneously taken chemotherapeutic drugs).
Influence on ability to drive motor transport and control mechanisms
Impact on the ability to drive and work with the technique Orungal does not have.

Cases of drug overdose Orungal were reported.
Treatment: in case of accidental overdose during the first hour after taking the drug, gastric lavage is indicated. If necessary, the patient is assigned Activated carbon. Itraconazole is not excreted through hemodialysis. There is no specific antidote.

Drugs that affect the metabolism of itraconazole.
It has been established that inducers of microsomal oxidation in the liver (rifampicin, rifabutin and phenytoin) can reduce the bioavailability of itraconazole and, accordingly, reduce its effectiveness.
Studies on the interaction of itraconazole with other enzyme inducers, such as Carbamazepine, phenobarbital and isoniazid, have not been conducted, but a similar effect can be expected.
Since Itraconazole is mainly metabolized by the participation of the CYP3A4 isoenzyme, potential inhibitors of this enzyme, such as ritonavir, indinavir, Clarithromycin and Erythromycin, may increase the bioavailability of itraconazole.
The effect of itraconazole on the metabolism of other drugs
Itraconazole can inhibit the metabolism of drugs metabolized by the isoenzyme CYP3A4. The result of this may be an increase or prolongation of their action (including side effects). After cessation of treatment, plasma concentrations of itraconazole decrease gradually, depending on the dose and duration of treatment.This should be taken into account when evaluating the inhibitory effect of itraconazole on the metabolism of concurrent drugs.
During the course of treatment orungal cannot be appointed:
- terfenadine, astemizol, mizolastine, cisapride, dofetilide, quinidine, pimozide, sertindol, levometadone, the use of which together with Orungal solution can lead to an increase in the concentration of these substances in plasma, which in turn can cause an increase in the QT interval and in rare cases - paroxysmal ventricular tachycardia type "pirouette" (torsade de pointes);
- oral and triazolam midazolam;
- CYP3A4 enzyme metabolized inhibitors of HMG-CoA reductase, such as simvastatin and lovastatin;
- ergot alkaloid preparations such as dihydroergotamine, ergometrine, ergotamine and methylergometrine.
While taking Orungal and Calcium channel blockers care must be takenbecause calcium channel blockers have a negative inotropic effect, which can enhance the similar effect of itraconazole. Itraconazole can reduce the metabolism of calcium channel blockers.
With simultaneous appointment with Orungal monitor plasma levels, effects, side effects oral anticoagulants; HIV protease inhibitors (such as ritonavir, indinavir, saquinavir); some anticancer drugs (such as the Vinca roseal alkaloids, busulfan, docetaxel,trimetrexate); CYP3A4 isoenzyme-metabolized by calcium channel blockers (dihydropyridine and verapamil); some immunosuppressive drugs (such as cyclosporine, tacrolimus, sirolimus); certain CYP3A4 isoenzyme-metabolized HMG-CoA reductase inhibitors, such as Atorvastatin ; some corticosteroids, such as Budesonide, Dexamethasone and methylprednisolone; as well as Digoxin, carbamazepine, buspirone, alfentanil, alprazolam, brotizolam, midazolam (w / w), rifabutin, methylprednisolone, ebastine, reboxetine, repaglinide, disopyramide, cilostazol, eletriptan, halo gafastamone, halopatoline, repaglinide, disopyramide, cilostazol, eletriptan, haloflufthinone, ebastine, reboxetine, repaglinide, disopyramide, cilostazol, eletriptan, halophasin, ebastine, reboxetine, repaglinide, disopyramide; With simultaneous use with Orungal dose of the above drugs, if necessary, should be reduced.
No interaction was found between itraconazole and zidovudine and fluvastatin.
No effect of itraconazole on the metabolism of ethinyl estradiol and norethisetron was noted.
Effect on protein binding
In vitro studies have shown no interaction due to competition for binding to plasma proteins between itraconazole and drugs such as imipramine, propranolol, diazepam, cimetidine, Indomethacin, tolbutamide, and sulfamethazine.

Keep out of reach of children at a temperature not exceeding 25 ° C.

solution - 2 years. After opening the package, the drug is usable for 1 month.
Shelf life of capsules - 3 years.