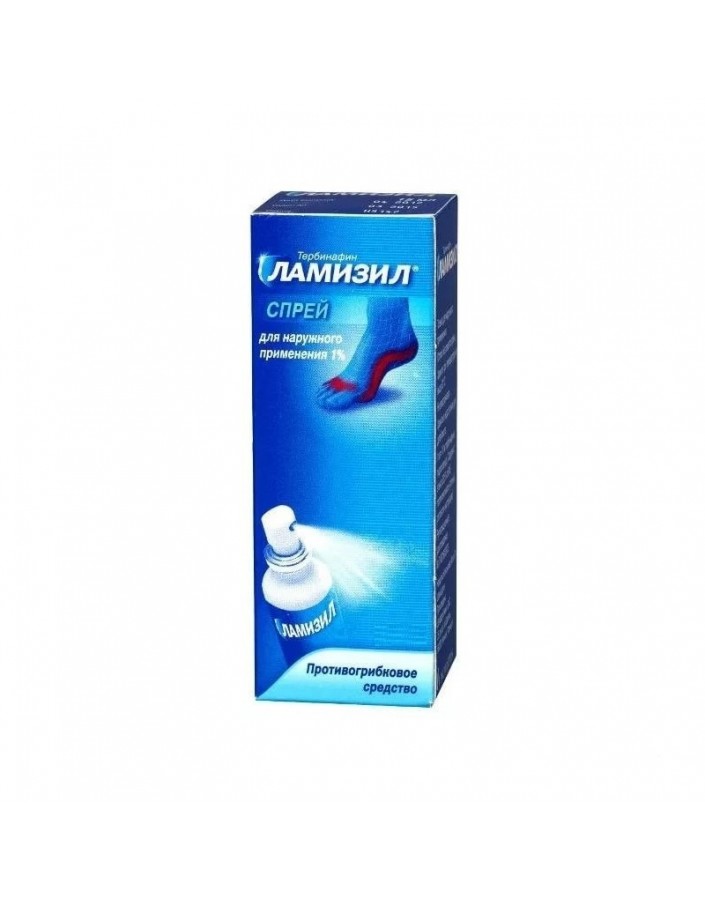 Lamisil spray is an antifungal drug for topical use with a wide spectrum of antifungal activity. In low concentrations, Terbinafine has a fungicidal effect against dermatophytes (Trychophyton rubrum, T.mentagrophytes, T.verrucosum, T.violaceum, T.tonsurans, Microsporum canis, Epidermophyton floccosum), mold (mainly C.albicans) and certain dimorphic fungi. Pityrosporum orbiculare). Activity against yeast fungi, depending on their species, can be fungicidal or fungistatic.
Terbinafine in a specific way changes the early stage of sterol biosynthesis occurring in fungi. This leads to a deficiency of ergosterol and to the intracellular accumulation of squalene, which causes the death of the fungal cell. The action of terbinafine is carried out by inhibiting the enzyme squalene epoxidase, located on the cell membrane of the fungus.
Terbinafine does not affect the cytochrome P450 system in humans and, accordingly, the metabolism of hormones or other drugs.

Hypersensitivity to terbinafine or to any of the inactive ingredients that make up the drug.

Outwardly.
Adults. Lamisil spray or solution can be applied 1 or 2 times a day, depending on the evidence. Before using the drug, it is necessary to thoroughly clean and dry the affected areas. The drug is sprayed (spray) or applied (solution) to the affected areas in an amount sufficient to thoroughly moisturize it, and, in addition, applied to the adjacent areas of both the affected and intact skin. In case of extensive fungal infections of the body, a spray of 30 ml is recommended.

At temperatures below 30 ° C