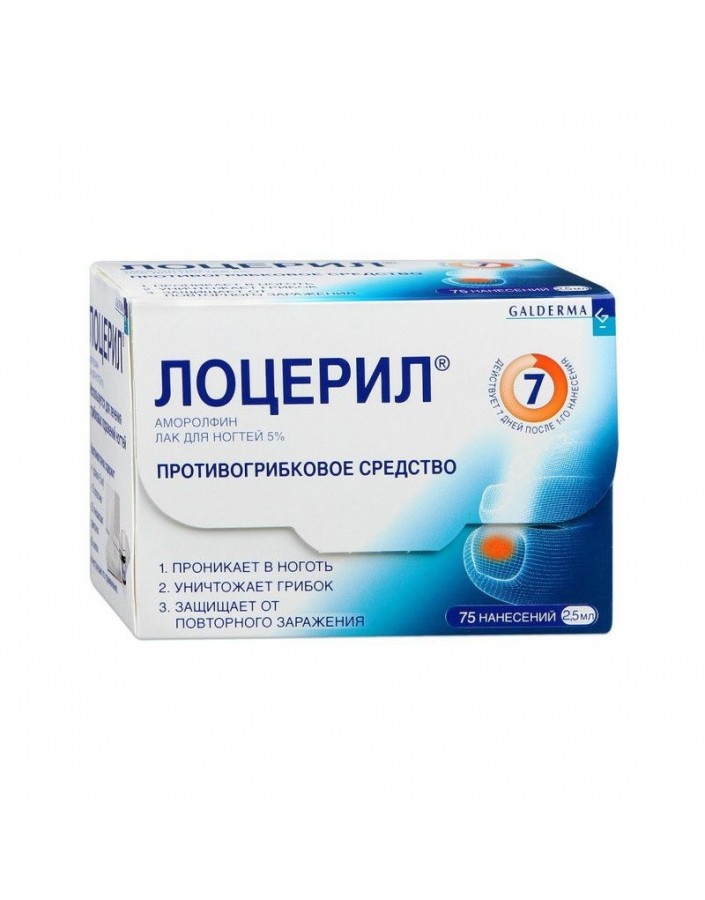 Antifungal drug for external use. It has a fungistatic and fungicidal effect, based on a change in the cell membrane of the fungus through impaired sterol biosynthesis. Amorolfine inhibits two different enzymes involved in the biosynthesis of ergosterol - delta14-reductase and delta7-delta8-isomerase.
Amorolfin has a wide spectrum of action, active against fungi of the genus Candida, Pityrosporum, Cryptococcus, Trichophyton, Microsporum, Epidermophyton, Alternaria, Hendersonula, Scopulariopsis, Cladosporium, Fonseceae, Wangiella, Coccidioides, Histoplasma, Sporothrix.
The bacteria, with the exception of Actinomyces, are not susceptible to amorolfine. Propionibacterium acnes shows only weak sensitivity.

- treatment of nail lesions caused by various types of fungi (in the event that no more than 2/3 of the nail plate is affected);
- prevention of fungal nail infections.

At onychomycosis nail polish is applied to the affected nails of the fingers or toes 1-2 times a week.
Therapy should be continued until the nail is regenerated and the affected area is completely cured. The course of treatment is an average of 6 months for nails on the hands and 9-12 months for nails on the legs.
The lacquer is applied as follows: before applying the drug, remove, if possible, the affected areas of the nail (especially on its surface) using the attached nail file. Then the surface of the nail is cleaned and degreased with an attached swab moistened with alcohol. Processing nail files and a tampon with alcohol should be carried out before each use of the drug. Varnish is applied to the entire surface of the affected nail with a spatula, allow it to dry. The above procedure is repeated for each affected nail.
Spatula should be dipped in a varnish, then remove the spatula from the bottle, not touching his neck. The neck of the vial is wiped with the same swab that was used to treat the nail, and the vial is tightly closed immediately after use. Allow the varnish to dry for approximately 3 minutes. After processing all the nails, the spatula is wiped with a used tampon. Contact of treated nails and tampons should be avoided; used tampon discarded.

Do not recommend to use Lotseril during pregnancy and lactation (breastfeeding).

Files used to treat affected nails should not be used to process healthy nails.
Persons working with organic solvents should wear impermeable gloves to protect nails coated with Loceryl.
During treatment with loceril varnish you should avoid using false artificial nails.
Use in pediatrics
Clinical data on the efficacy and safety of loceril use in children are absent; therefore, loceral should not be prescribed to children.

There is no established clinically significant drug interaction Loceryl with other drugs.

The drug should be stored in a closed box at a temperature not exceeding 30 ° C.