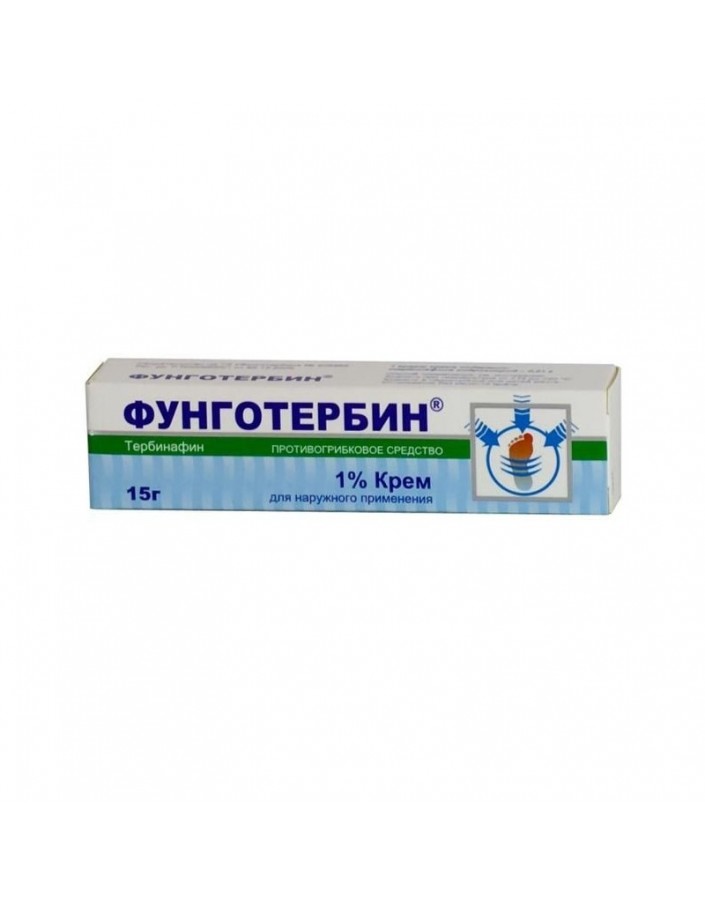 - antifungal drug, is an allylamine. It has a wide range of antifungal action. Active against dermatophytes: Trichophyton rubrum, Trichophyton mentagrophytes, Trichophyton tonsurans, Trichophyton verrucosum, Trichophyton violaceum, Microsporum canis, Epidermophyton floccosum. In low concentrations, it has a fungicidal effect on dermatophytes, mold fungi (Aspergillus, Cladosporium, Scopulariopsis brevicaulis) and some dimorphic fungi. The activity against yeast fungi of the genus Candida and their mycelial forms, depending on the species, can be fungicidal or fungistatic.
Funterbin is also active in relation to Pityrosporum orbiculare (also called Malassezia furfur) is the causative agent of varicolor (pityriasis).
Funterbin disrupts the ergosterol synthesis in fungi by inhibiting the enzyme squalene epoxidase located on the cell membrane of the fungus. This leads to a deficiency of ergosterol and to the intracellular accumulation of squalene, which causes the death of the fungal cell.
Terbinafine does not affect the synthesis of hormones and other drugs.

Hypersensitivity to the drug. The use of the drug in children under 12 years is not recommended.

The drug during pregnancy should be used only for very strict indications and if the potential therapeutic effect exceeds the possible risk of therapy.
If necessary, the appointment of the drug during lactation should decide on the termination of breastfeeding.

Funterbin applied to the skin once or twice a day. Before applying the cream it is necessary to clean and dry the affected areas. The cream is applied in a thin layer on the affected skin and surrounding areas and lightly rubbed.
The average duration of treatment: Ringworm of trunk, legs: 1 week 1 time per day; Ringworm: 1 week 1 time per day Skin candidiasis: 1 - 2 weeks 1 or 2 times a day; Tonsolithus: 2 weeks 1 or 2 times a day.

In the place of application of the drug in rare cases there was a redness, itching or burning sensation, however, these phenomena rarely led to the need to stop treatment.These above symptoms should be distinguished from allergic reactions, such as urticaria, which rarely occur, but when they occur, treatment should be stopped.