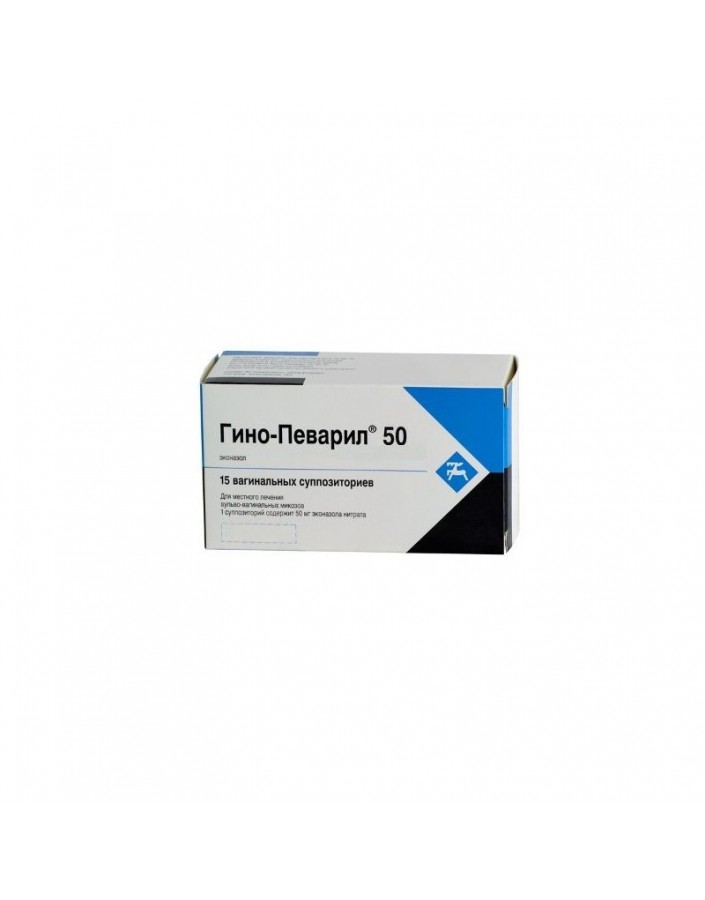 Antifungal medication.
Econazole nitrate has a wide spectrum of action and is active against dermatophytes, yeasts and mold fungi. It also has a clinically significant activity against gram-positive bacteria.
Econazole nitrate damages the cell membrane, which leads to an increase in the permeability of the fungal cell. The target of the action of econazole nitrate are the acyl groups of unsaturated fatty acids that make up membrane phospholipids.

After the introduction of econazole into the vagina, nitrate is absorbed to a small extent.

One suppository 50 mg is introduced deep into the vagina 1 time / day before going to bed for at least 14 days. It is necessary to conduct a full course of treatment, even despite the disappearance of subjective symptoms (itching, leukorrhea).
One suppository 150 mg injected deep into the vagina for 3 days. In the case of a relapse or a positive result of the culture, a second course of treatment is performed 1 week after the treatment.

Local reactions: rarely - irritation, redness of the mucous membrane of the vagina and vulva, itching and burning.

When intravaginal administration of Gyno-Pevaril econazole nitrate is absorbed from the vagina into the systemic circulation, therefore, the drug should not be used in the first trimester of pregnancy, except in cases of extreme necessity. In the II and III trimesters, Gyno-Pevaril can be used if the potential benefit of therapy for the mother exceeds the possible risk to the fetus.
It is not known whether econazole nitrate passes into breast milk. Breastfeeding should be discontinued at the time of use of the drug.

In case of severe irritation, Gyno-Pevaril treatment should be stopped.
In patients sensitive to imidazoles, hypersensitivity to econazole nitrate is possible.
With the simultaneous use of latex condoms or diaphragms and intravaginal drugs for the treatment of infections, the effectiveness of latex barrier contraceptives may decrease. Therefore, Gyno-Pevaril is not recommended to be used simultaneously with the diaphragm or condom.
Gyno-Pevaril should not be prescribed in combination with other drugs for the treatment of diseases of the genital organs, administered orally or externally.
Preparations for intravaginal administration can inactivate the spermicidal contraceptive.
Data on the use of Gyno-Pevaril in elderly patients (over 65 years) are insufficient.
The drug is not intended for oral administration.
Use in pediatrics
The safety and efficacy data of Gyno-Pevaril children under 16 are missing.

There are no reports of econazole nitrate overdose.
Symptoms: in case of accidental intake of Gyno-Pevara, nausea, vomiting, diarrhea are possible inside.
Treatment: gastric lavage, ingestion of Activated carbon, conducting symptomatic therapy.

Data on drug interactions of the drug are not available.

The drug should be stored at temperatures up to 30 ° C. Shelf life - 5 years.