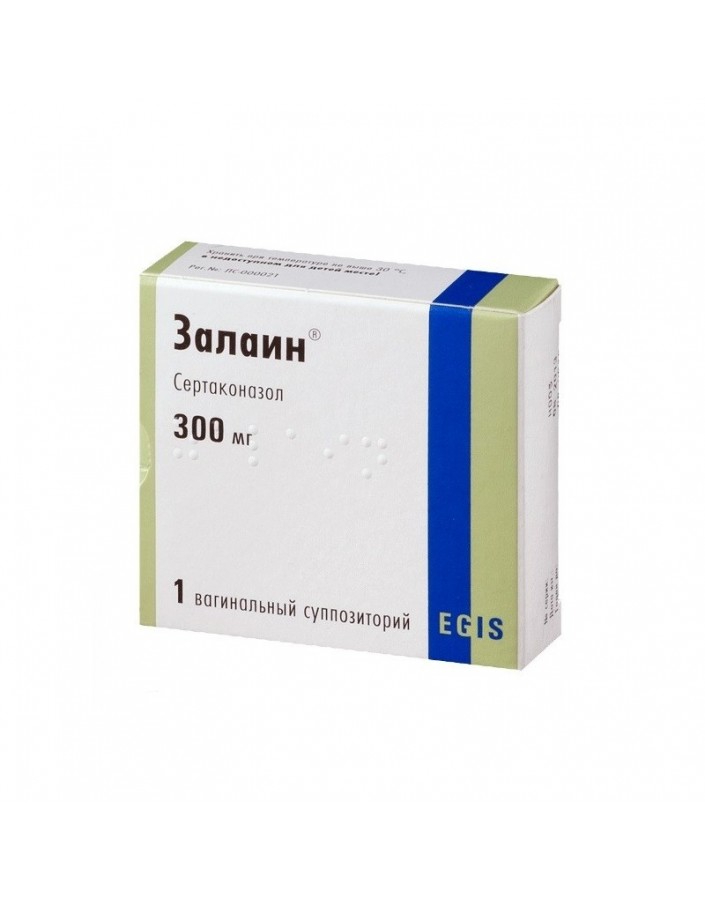 In blister 1 suppository. In packing 1 blister.

Zalain - antifungal drug, a derivative of imidazole and benzothiophene.

In therapeutic doses has fungistatic and fungicidal action. The mechanism of action is to inhibit the synthesis of ergosterol and increase the permeability of the cell membrane, which leads to the lysis of the cell of the fungus.

Active in relation to:

Active also in relation to:

Infections of the mucous membrane of the vagina caused by Candida fungi (candidal vulvovaginitis).

Hypersensitivity to sertaconazole, imidazole derivatives or other components of the drug.

Sufficient data on the use of Zalain during pregnancy and lactation is not.

Given the method of use of the drug (once), as well as the absence of systemic absorption, Zalain use during pregnancy and lactation is possible if the intended benefit to the mother outweighs the possible risk to the fetus or child.

The drug is prescribed once. The vaginal suppository is inserted deep into the vagina, before bedtime. If clinical symptoms persist, repeated use of the drug is possible after 7 days.

Before intravaginal administration of the suppository, the external genitals should be washed using neutral or alkaline soap.

Local reactions - burning, itching in the vagina (they pass on their own, do not require discontinuation of the drug).

In case of simultaneous infection of the labia and adjacent areas (candidal vulvitis), local treatment with Zalain cream (Zalain cream 2% tube 20 g box 1 of Egis Pharmaceutical Plant) should be additionally carried out.

When using the drug is recommended to refrain from sexual contact.

Treatment can be carried out during menstruation.

To prevent urogenital reinfection, it is recommended to consider the simultaneous treatment of the sexual partner.

The risk of damage to barrier contraceptives (condom and diaphragm) increases with simultaneous use with Zalain.

In the absence of characteristic clinical symptoms, the mere detection of Candida fungi on the mucous membrane of the vagina cannot be an indication for prescribing the drug. In this case, it is recommended to identify and eliminate the factors favoring the appearance and development of fungi.

With simultaneous use of the drug Zalain with local contraceptives may be observed weakening of the spermicidal action of the latter.