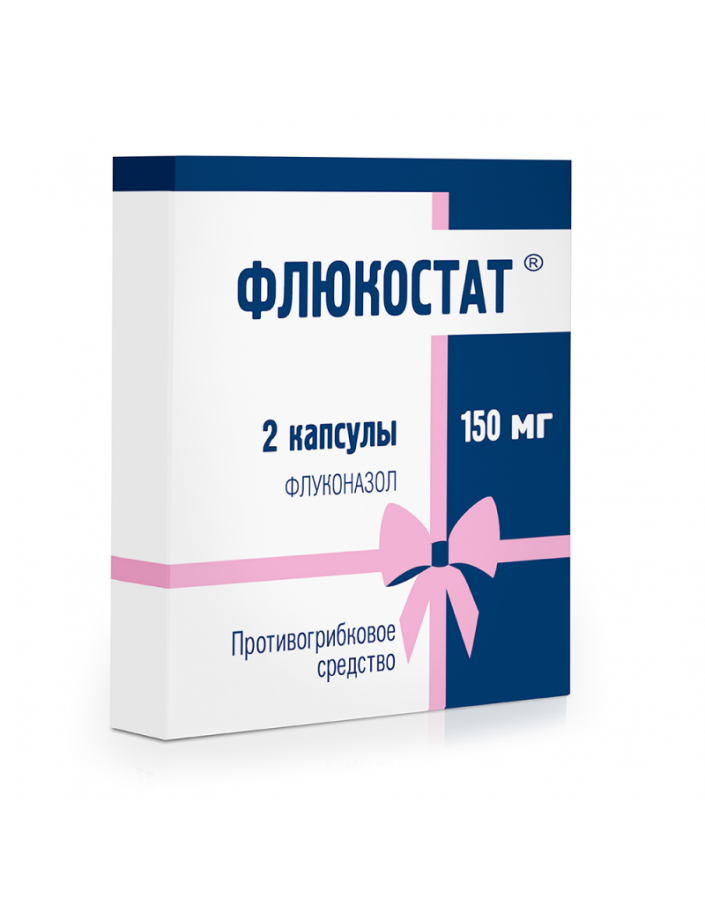 Flucostat - antifungal drug, a triazole derivative. The mechanism of action is associated with the ability to selectively inhibit the synthesis of sterol in the cell of the fungus.
Active against Candida spp., Cryptococcus neoformans, Microsporum spp., Trichophyton spp., Blastomyces dermatitidis, Coccidioides immitis, Histoplasma capsulatum.

Capsules are used inside. The daily dose of flucostat depends on the nature and severity of the fungal infection.

After completion of the full course of primary treatment, fluconazole is prescribed at a dose of 200 mg / day for a long period of time.

the dose is usually 400 mg on the first day, and then 200 mg each. With insufficient clinical efficacy, the dose of the drug may be increased to 400 mg / day. The duration of therapy depends on the clinical effectiveness.

- 50-100 mg 1 time / day; the duration of treatment is 7-14 days. If necessary, in patients with a pronounced decrease in immunity, treatment may be longer.

50 mg 1 time per day for 14 days in combination with local antiseptic agents for the treatment of the prosthesis.

for example, for esophagitis, non-invasive bronchopulmonary lesions, candiduria, candidiasis of the skin and mucous membranes, etc., the effective dose is usually 50-100 mg / day for a duration of treatment of 14-30 days. DTo prevent recurrence of oropharyngeal candidiasis in patients with AIDS after completion of the full course of primary therapy, the drug may be prescribed 150 mg 1 time per week.

Some patients may need more frequent use.

, Flucostat is prescribed once in a dose of 150 mg orally.
For the prevention of candidiasis, the recommended dose of fluconazole is 50-400 mg 1 time / day, depending on the degree of risk of developing a fungal infection. If there is a high risk of generalized infection, for example, in patients with expected severe or prolonged neutropenia, the recommended dose is 400 mg 1 time / day. Fluconazole is prescribed a few days before the expected appearance of neutropenia; after an increase in the number of neutrophils of more than 1000 / mm3, treatment is continued for another 7 days.

The recommended dose is 150 mg 1 time per week or 50 mg 1 time / day. The duration of therapy in normal cases is 2-4 weeks, but with mycoses of the feet, longer therapy may be required (up to 6 weeks).

The recommended dose is 150 mg once a week. Treatment should be continued until the infected nail is replaced (the uninfected nail grows). Normally, it takes 3-6 months and 6-12 months, respectively, to re-grow nails on the fingers and feet.

may require the use of the drug in a dose of 200-400 mg / day for up to 2 years. The duration of therapy is determined individually; it may be 11-24 months with coccidiomycosis; 2-17 months with paracoccidioidomycosis; 1-16 months for sporotrichosis and 3-17 months for histoplasmosis.

as with similar infections in adults, the duration of treatment depends on the clinical and mycological effect. In children, the drug should not be used in a daily dose that would exceed that in adults. The drug is used daily 1 time / day.

The recommended dose of fluconazole is 3 mg / kg / day. On the first day, a loading dose of 6 mg / kg can be given in order to more quickly achieve constant equilibrium concentrations.

The recommended dose is 6-12 mg / kg / day, depending on the severity of the disease.

in which the risk of developing an infection is associated with neutropenia, developing as a result of cytotoxic chemotherapy or radiation therapy, the drug is prescribed at 3-12 mg / kg / day, depending on the severity and duration of persistence of induced neutropenia, the maximum daily dose is not more than 600 mg.

In children with impaired renal function, the daily dose of the drug should be reduced (in the same proportion as in adults), in accordance with the severity of renal failure.

From the side of blood-forming organs: rarely - leukopenia, thrombocytopenia, neutropenia, agranulocytosis.

Since the cardiovascular system: an increase in the duration of the Q-T interval; flicker, ventricular flutter.

In rare cases, the use of fluconazole was accompanied by toxic changes in the liver, including fatal, mainly in patients with serious concomitant diseases. In the case of hepatotoxic effects associated with fluconazole, they are not markedly dependent on the total daily dose, duration of therapy, sex and age of the patient. The hepatotoxic effect of fluconazole has usually been reversible; his symptoms disappeared after cessation of therapy. If clinical signs of liver damage appear that may be associated with fluconazole, the drug should be withdrawn.

AIDS patients are more likely to develop severe skin reactions with the use of many drugs. In cases where a rash develops in patients with a surface fungal infection and is regarded as definitely associated with fluconazole, the preparation should be discontinued. When a rash appears in patients with invasive / systemic fungal infections, they should be carefully monitored and fluconazole should be canceled when a bullous change or erythema multiforme occurs.

Care must be taken when taking fluconazole with cisapride, rifabutin or other drugs metabolized by the cytochrome P450 system.

Treatment should be continued until clinical and hematologic remission occurs, since its premature termination leads to relapse.

Anticoagulants: In patients receiving fluconazole and coumarin anticoagulants, careful monitoring of the prothrombin time is necessary because it may increase.
- Sulfonylurea drugs: fluconazole, while taking it, can lengthen the half-life of oral sulfonylurea preparations, therefore, when used together, the possibility of hypoglycemia should be considered.
- Phenytoin: The simultaneous use of fluconazole and phenytoin may be accompanied by an increase in the concentration of phenytoin in a clinically significant degree, which requires a reduction in its dose.
- Rifampicin: If you take rifampicin and fluconazole at the same time, the maximum concentration and half-life of the latter decreases, therefore, if necessary, combined use, you should increase the dose of fluconazole.
- Rifabutin: The combined use of fluconazole and rifabutin is accompanied by an increase in the serum levels of the latter, may develop uveitis.
- Cyclosporine: When combined, the use of fluconazole and cyclosporine is recommended to monitor the concentration of the latter in the blood, since it may increase.
- Terfenadine and astemizol: Given the occurrence of serious life-threatening arrhythmias in patients who received azole antifungal agents in combination with terfenadine or astemizole, their joint use is contraindicated.
- Cisapride: At the same time taking fluconazole and cisapride, cases of adverse reactions to the heart, including paroxysms of ventricular tachycardia, are described. Simultaneous use is contraindicated.
- Zidovudine: When used in combination, it is possible to increase the concentration of zidovudine in the blood plasma. Patients receiving such a combination should be monitored to identify side effects of zidovudine.
- Theophylline: Reception of fluconazole leads to a decrease in the average rate of creatinine clearance from blood plasma, hence the risk of the toxic effect of theophylline and overdose increases.

Although no specific manifestations of pharmaceutical incompatibility are described, mixing a solution of fluconazole with solutions of other drugs before infusion is not recommended.

When using fluconazole in patients who simultaneously receive other drugs metabolized by the cytochrome P450 system, care must be taken.

In the reach of children at a temperature not exceeding 25 ° C.