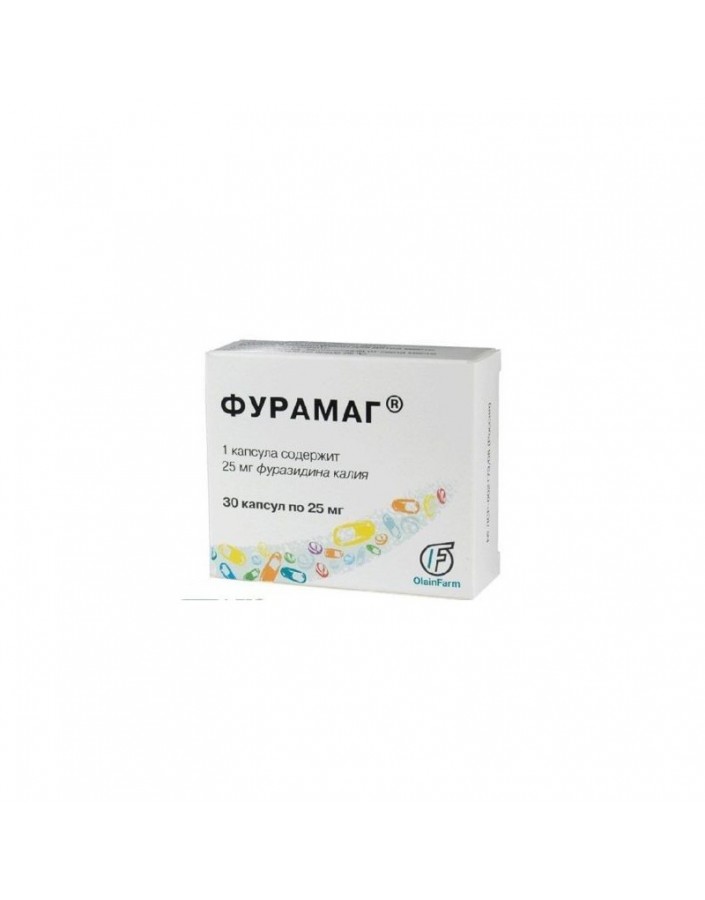 Furamag antimicrobial agent of the nitrofuran group. It is a complex preparation containing furazidin in conjunction with Magnesium carbonate basic in the 1: 1 ratio. The presence of magnesium carbonate significantly changes the pharmacokinetic characteristics of furazidina. The drug has a higher bioavailability compared with furazidinom, stable in the acidic environment of the stomach. Does not change the pH of urine, while creating high concentrations in the kidneys. In the treatment of infectious diseases, Furamag's ability to create high concentrations of the active substance in the lymph is also of great importance, which prevents the spread of infection through the lymphatic ducts, the drug also creates high concentrations in the bile, and somewhat lower in the serum. After absorption of the drug from the gastrointestinal tract, high concentrations are also created in the portal vein of the liver. Does not cause resistance of microorganisms with repeated use.

The mechanism of action of the drug is associated with inhibition of nucleic acid synthesis. Under the influence of Furamag in the cells of microorganisms, the respiratory activity and the cycle of tricarboxylic acids are suppressed, and other biochemical processes are inhibited, which results in the destruction of their membrane or cytoplasmic membrane and the death of the microorganism.Also, as a result of Furamag, the amount of toxins synthesized by microorganisms is reduced, which has a positive effect on the general condition of the patient, even before the number of microorganisms significantly decreases.
Furamag has a wide spectrum of antibacterial action: it is active against gram-positive and gram-negative microorganisms, including strains resistant to antibiotics and other antibacterial agents. Recommended use of the drug for infections, when treatment with other drugs did not give the expected effect.

The drug is active on: Enterobacter aerogenes, Citrobacter, Proteus mirabilis, Morganella morganii, E. Coli, Staphylococcus spp., Streptococcus spp., Salmonella spp., Shigella spp. Effective in the treatment of septicemia caused by staphylococci, Escherichia coli and the causative agent of paratyphoid B, as well as peritonitis caused by hemolytic staphylococci and Escherichia coli.
The drug, unlike other antibacterial drugs, not only does not inhibit the immune system, but also activates it, increasing the ability of leukocytes to phagocytose microorganisms. In therapeutic doses, stimulates leukopoez.
It is adsorbed in the small intestine by passive diffusion. The maximum concentration in the blood remains from 3 to 8 hours after administration. In the urine is detected 4 hours after ingestion. Excreted by the kidneys by glomerular filtration and tubular secretion. The bioavailability of the drug increases when it is taken immediately after a meal.

Infectious and inflammatory diseases, including purulent wounds, cystitis, urethritis, pyelonephritis, purulent arthritis, infections of the female genital organs, conjunctivitis, keratitis, burns, wound infection, sepsis, prevention of infections during urological operations, cytoscopy, catheterization. It is possible to use the drug in infectious and inflammatory diseases of the respiratory tract, including bronchitis, pneumonia, and chronic obstructive pulmonary diseases.

Accept after eating, drinking plenty of water.
Adults appoint 50-100mg 3 times a day. The course of treatment is 7-10 days.
If necessary, the course can be repeated after a break, which must be at least 10 days. If the drug is missed, then continue treatment, taking the usual dose in the same way without changing it. The maximum daily dose of 600mg.
Children aged 1 to 10 years are prescribed the drug at a dosage of 5 mg / kg of the body per day, dividing the daily dose into several doses. Children weighing more than 30 kg are prescribed 50mg 3 times a day.

The drug, in general, is well tolerated, in isolated cases, vomiting, nausea, headache, anorexia, and allergic reactions may develop. With prolonged use, it is necessary to monitor the function of the kidneys and liver.
To prevent the occurrence of side effects, it is recommended to drink the drug with plenty of water and at the same time take Vitamins of group B.

Hypersensitivity to the drug. Children age up to 1 month, end-stage chronic renal failure, toxic hepatitis, polyneuritis. The period of pregnancy and lactation.

Use during pregnancy is contraindicated. At the time of treatment with the drug, breastfeeding is stopped.

Overdose causes headache, nausea, tinnitus, loss of appetite. Allergic reactions may develop. For the relief of acute attacks of overdose using antihistamines, it is also indicated gastric lavage and the appointment of enterosorbents. For the prevention of neuritis, it is recommended to take a complex of vitamins B.

In a dry, dark place at a temperature not higher than 25 degrees.