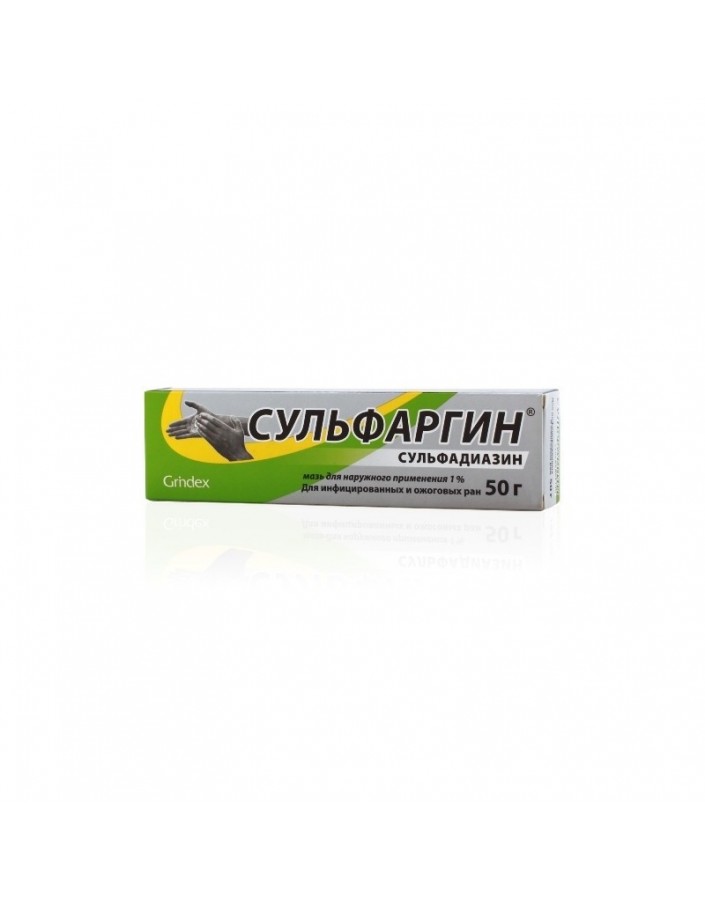 Sulfargin® - an antimicrobial bactericidal agent of broad-spectrum, belonging to the group of sulfonamides. The drug is active against gram-positive and gram-negative bacteria Escherichia coli, Proteus spp., Staphylococcus spp., Klebsiella spp.

Sulfargin is characterized by moderate osmotic activity and does not possess necrolytic properties.

When applied to the wound surface, about 10% sulfadiazine and 1% silver are absorbed into the peripheral and systemic circulation. Application to the extensive wound surface is accompanied by an increase in the concentration of sulfadiazine in the blood to 10-20 μg / ml.

Pregnancy, lactation, children up to 1 year; pronounced deficiency of glucose-6-phosphate dehydrogenase, hypersensitivity to sulfanilamides. Sulfargin should not be used for the treatment of deep purulent wounds and burn surfaces with abundant exudation.

The drug is contraindicated in pregnancy and lactation.

Outwardly. After surgical treatment of the wound and removal of necrotic tissue, apply a thin layer (2-4 mm) of ointment (for dressing or open method) 1-2 times a day to the damaged surface.

The maximum single dose is 300 g. The treatment period is individual and depends on the nature of the disease and the effectiveness of the treatment used, in general cases lasts up to 3 weeks.

Applying ointment to the skin is painless, ointment does not stain clothes and underwear.

If you forget to use the drug, use as soon as possible and continue using as usual. Do not use a double dose if the previous time of use of the drug was missed.

If you feel that the effect of the drug is too strong or too weak, tell your doctor about it.

Burning and itching at the site of application, violation of skin pigmentation, skin allergic reactions, skin necrosis, erythema multiforme, interstitial nephritis, leukopenia, which is characterized mainly by a decrease in the number of neutrophils.

The degree of absorption of the drug depends on the size of the burn surface and the degree of tissue damage.

Silver sulfadiazine may inactivate enzyme preparations used to cleanse a wound; therefore, the simultaneous use of these preparations is undesirable.

Store in a dark place at a temperature not higher than 25 ° C. Do not freeze.