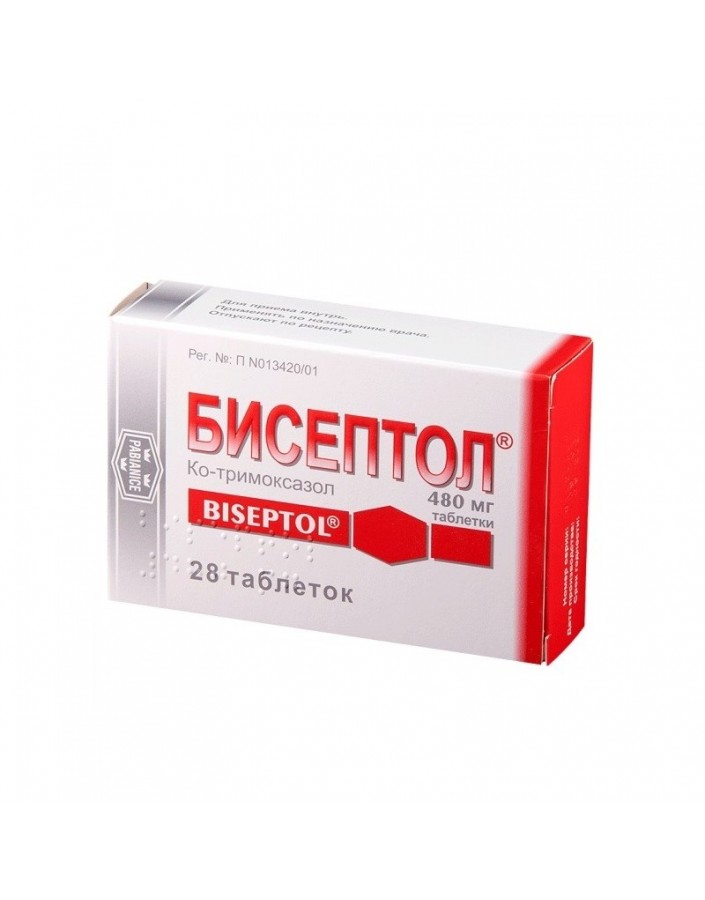 Pharmacokinetics:
When administered, both components of the drug are completely absorbed from the gastrointestinal tract. Cmax of the active components of the drug is observed after 1-4 hours.
Trimethoprim penetrates well into cells and through tissue barriers into the lungs, kidneys, prostate gland, bile, saliva, sputum, liquor. The binding of trimethoprim to plasma proteins is 50%, T1 / 2 is normally 8.6-17 hours. The main route of excretion is through the kidneys (50% unchanged).
Sulfamethoxazole: plasma protein binding is 66%, T1 / 2 is normally 9–11 h. The main elimination pathway is via the kidneys, and 15–30% in the active form.

Dosing regimen:
Install individually. The drug is taken after meals with a sufficient amount of liquid.
Children aged 3 to 5 years, the drug is prescribed 240 mg (2 tab. 120 mg) 2 times / day; children aged 6 to 12 years old - 480 mg each (4 pills of 120 mg or 1 pill of 480 mg) 2 times / day.
In pneumonia, the drug is prescribed at the rate of 100 mg of sulfamethoxazole per 1 kg of body weight / day. The interval between doses is 6 hours, the duration of treatment is 14 days.
In gonorrhea, the dose of the drug is 2 g (in terms of sulfamethoxazole) 2 times / day with an interval between doses of 12 hours.
Adults and children over 12 years old are prescribed 960 mg 2 times / day, with long-term therapy, 480 mg 2 times / day.
Duration of treatment is from 5 to 14 days. In severe cases of the disease and / or in chronic infections, a single dose may increase by 30-50%.
With the duration of the course of therapy for more than 5 days and / or increasing the dose of the drug, it is necessary to monitor the picture of peripheral blood; when pathological changes occur, folic acid should be administered at a dose of 5–10 mg / day.
In patients with renal insufficiency with a CC of 15-30 ml / min, the standard dose of Biseptol should be reduced by 50%.

for use:
- established damage to the liver parenchyma;
- pronounced renal dysfunction in the absence of the ability to control the concentration of the drug in the blood plasma;
- renal failure severe (CC less than 15 ml / min);
- severe blood diseases (aplastic anemia, B12-deficient anemia, agranulocytosis, leukopenia, megaloblastic anemia, anemia associated with folic acid deficiency);
- hyperbilirubinemia in children;
- deficiency of glucose-6-phosphate dehydrogenase (risk of hemolysis);
- pregnancy;
- lactation;
- children's age up to 3 years (for this dosage form);
- hypersensitivity to the drug;
- Hypersensitivity to sulfonamides.
* Be wary of prescribing the drug with a deficiency of folic acid in the body, asthma, diseases of the thyroid gland.

Application for violations of the liver:
The drug is contraindicated in case of established damage to the liver parenchyma.

Application for violations of renal function:
The drug is contraindicated in marked impaired renal function (CC less than 15 ml / min).
In patients with renal insufficiency with a CC of 15-30 ml / min, the standard dose of Biseptol should be reduced by 50%.

Use in children:
Contraindications: children up to 3 years (for this dosage form).

Special instructions:
Be wary appoint the drug with a burdened allergic history.
With long (more than a month) courses of treatment, regular blood tests are necessary, since there is a likelihood of hematological changes (most often asymptomatic). These changes may be reversible with the appointment of folic acid (3-6 mg / day), which does not significantly violate the antimicrobial activity of the drug.Special care is needed in the treatment of elderly patients or patients with suspected initial folate deficiency. Appointment of folic acid is also advisable with long-term drug treatment in high doses.
For the prevention of crystalluria, it is recommended to maintain a sufficient amount of urine. The probability of toxic and allergic complications of sulfonamides increases significantly with a decrease in the filtration function of the kidneys.
Against the background of treatment, it is also inappropriate to eat foods containing a large amount of PABA — green parts of plants (cauliflower, spinach, legumes), carrots, and tomatoes.
Excessive solar and UV radiation should be avoided.
The risk of side effects is significantly higher in AIDS patients.
It is not recommended to use the drug for tonsillitis and pharyngitis caused by? -Hemolytic streptococcus group A, due to the widespread resistance of the strains.
Trimethoprim can change the results of determining the level of Methotrexate in the serum, carried out by the enzymatic method, but does not affect the result when choosing a radioimmunological method.
Co-trimoxazole can increase by 10% the results of the reaction of Jaffe with picric acid for the quantitative determination of creatinine.

:
* Symptoms: lack of appetite, intestinal colic, nausea, vomiting, dizziness, headache, drowsiness, loss of consciousness, fever, hematuria, crystalluria are also possible.Later, bone marrow depression and jaundice may develop.
After acute poisoning with trimethoprim, nausea, vomiting, dizziness, headache, depression, disorder of consciousness, and bone marrow function depression are possible.
It is not known what dose of co-trimoxazole can be life threatening.
Chronic poisoning: the use of co-trimoxazole in high doses over a prolonged period can lead to inhibition of bone marrow function, manifested by thrombocytopenia, leukopenia or megaloblastic anemia.
* Treatment: removal of the drug and taking measures to remove it from the gastrointestinal tract (gastric lavage no later than 2 hours after taking the drug or cause vomiting), drink plenty of water if diuresis is insufficient, and the kidney function is preserved. Introduce Calcium folinate (5-10 mg / day). Acid urine accelerates the excretion of trimethoprim, but may also increase the risk of sulfonamide crystallization in the kidneys.
The blood picture, electrolyte composition in plasma and other biochemical parameters should be monitored. Hemodialysis is moderately effective, and peritoneal dialysis is not effective.

Drug Interactions:
With the simultaneous use of Biseptol with thiazide diuretics, there is a risk of thrombocytopenia and bleeding (the combination is not recommended).
Co-trimoxazole increases the anticoagulant activity of indirect anticoagulants, as well as the action of hypoglycemic drugs and methotrexate.
Co-trimoxazole reduces the intensity of hepatic metabolism of phenytoin (increases its T1 / 2 by 39%) and Warfarin, enhancing their action.
Rifampicin reduces T1 / 2 trimethoprim.
With simultaneous use of pyrimethamine in doses exceeding 25 mg / week., Increases the risk of megaloblastic anemia.
With simultaneous use of diuretics (often thiazides) increase the risk of thrombocytopenia.
Benzocaine, procainum, procainamide (like other drugs, the hydrolysis of which produces PABA) reduces the effectiveness of Biseptol.
Between diuretics (including thiazides, furosemide) and oral hypoglycemic agents (sulfonylurea derivatives), on the one hand, and sulfonamide antibacterial agents, on the other hand, a cross allergic reaction is possible.
Phenytoin, barbiturates, PAS increase the manifestations of folic acid deficiency while using with Biseptol.
Derivatives of salicylic acid enhance the effect of Biseptol.
Ascorbic acid, hexamethylenetetramine (like other urinary acidifying drugs) increase the risk of crystalluria during the use of Biseptol.
Kolestiramin reduces absorption while taking it with other drugs, so it should be taken 1 h after or 4-6 h before taking co-trimoxazole.
With simultaneous use with drugs that inhibit bone marrow hematopoiesis, the risk of myelosuppression increases.
In some cases, Biseptol® can increase the concentration of Digoxin in the blood plasma in elderly patients.
Biseptol® can reduce the effectiveness of tricyclic antidepressants.
Patients after kidney transplantation, with simultaneous use of co-trimoxazole and cyclosporine, show a dysfunction of the transplanted kidney, manifested by an increase in serum creatinine concentrations, which is probably caused by the action of trimethoprim.
It reduces the effectiveness of oral contraception (inhibits the intestinal microflora and reduces the enterohepatic circulation of hormonal drugs).