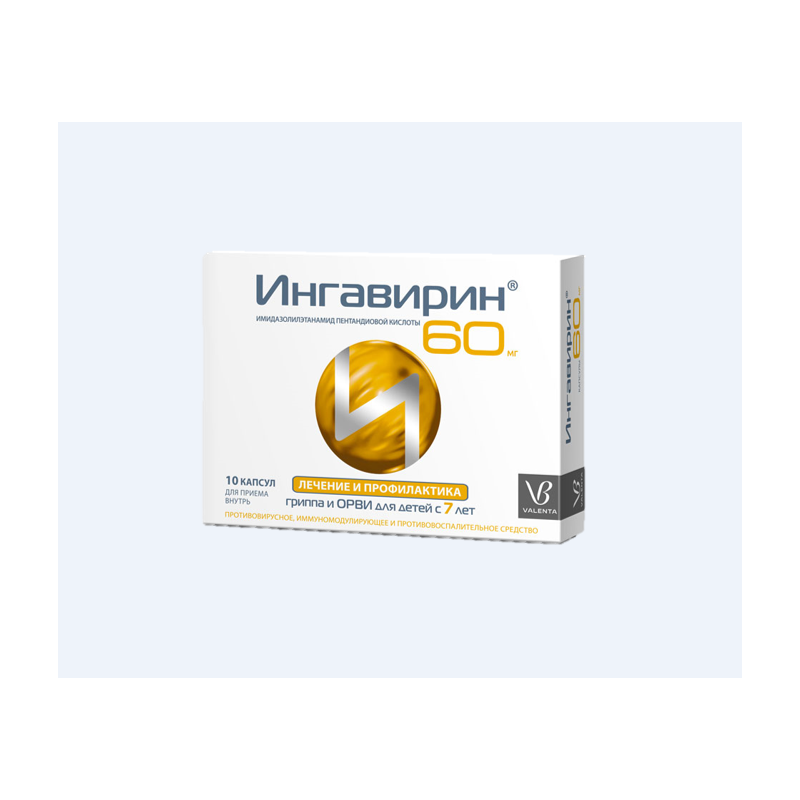 Trade name of the drug: Ingavirin

The composition of one capsule

The composition of the ink for the logo: shellac, propylene glycol E 1520, titanium dioxide E 171.

In preclinical and clinical studies, the effectiveness of the drug Ingavirin in the treatment of influenza A viruses (A (H1N1), including "Pork" A (H1N1)pdm09, A (H3N2), A (H5N1)) and type B, adenovirus, parainfluenza virus, respiratory syncytial virus; in preclinical studies: coronavirus, metapneumovirus, enterovirus, including Coxsackie virus and rhinovirus.

The drug Ingavirin contributes to the accelerated elimination of viruses, reducing the duration of the disease, reducing the risk of complications.

The mechanism of action at the level of infected cells due to the stimulation of innate immunity factors suppressed by viral proteins.

The drug does not have mutagenic, immunotoxic, allergenic and carcinogenic properties, does not have a local irritating effect. The drug Ingavirin does not affect the reproductive function, does not have embryotoxic and teratogenic effects.

Treatment of influenza A and B and other acute respiratory viral infections (adenovirus infection, parainfluenza, respiratory syncytial infection) in children from 7 to 17 years old.

Hypersensitivity to the active substance or any other component of the drug. Lactase deficiency, lactose intolerance, glucose-galactose malabsorption.

Children's age up to 7 years.

This dosage form is not intended for use in persons 18 years and older (it is necessary to use dosage forms that provide the possibility of taking the drug Ingavirin 90 mg.).

Inside Regardless of the meal.

For the treatment of influenza and acute respiratory viral infections, children from 7 to 17 years old are prescribed 1 capsule (60 mg) 1 time per day. The duration of treatment is 5-7 days (depending on the severity of the condition). The drug intake is started from the moment the first symptoms of the disease appear, preferably not later than 2 days from the onset of the disease.

Cases of drug overdose Ingavirin so far not reported.

It is not recommended to take other antiviral drugs at the same time.

Influence on ability to use vehicles, mechanisms

Not studied, however, given the mechanism of action and the profile of adverse reactions, it can be suggested that the drug does not affect the ability to drive vehicles, mechanisms.

In the dark place at a temperature of no higher than 250C. Keep out of the reach of children.