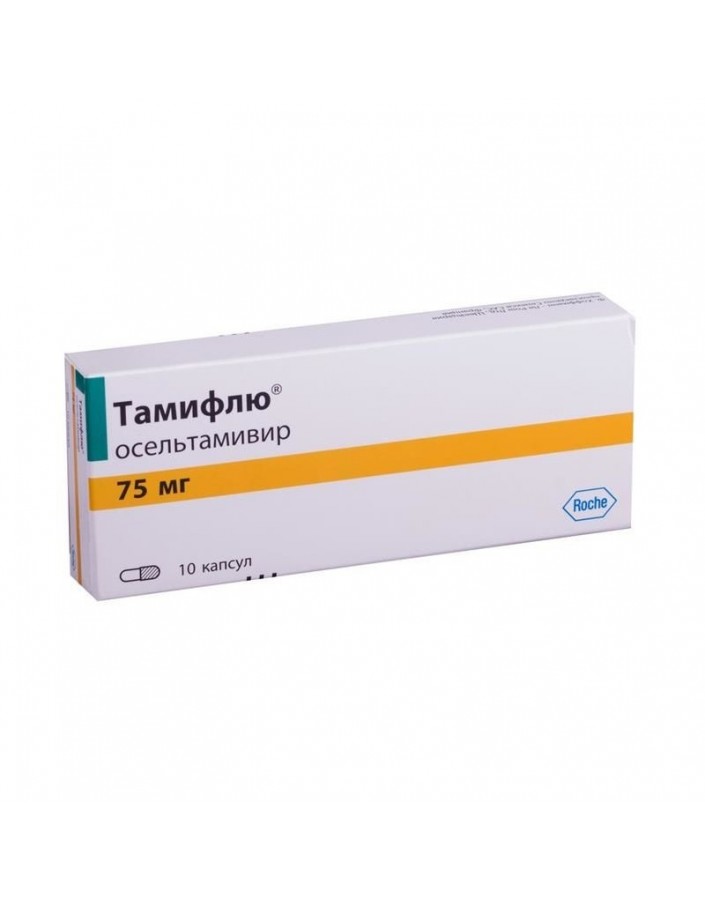 Tamiflu capsules. Hard gelatin capsules, size 2. Body - gray, opaque; the lid is light yellow, opaque. The contents of the capsules are white to yellowish powder. “Roche” is applied to the body of the capsule, “75 mg” is applied to the cap.
Thereiflu powder for suspension for oral administration. Granulate, from white to light yellow color, with a fruity odor; clumping is allowed. After reconstitution, it forms an opaque suspension of white to light yellow color (about 52 ml of water is added to the vial and shaken vigorously for 15 seconds).

Mechanism of action
Tamiflu is an antiviral drug. Oseltamivir phosphate is a pro-drug, its active metabolite (oseltamivir carboxylate) competitively and selectively inhibits neuraminidase of influenza A viruses and an enzyme that catalyzes the process of releasing newly formed virus particles from infected cells, their penetration into the epithelial cells of the respiratory tract and the further spread of the virus in the body.
Oseltamivir carboxylate acts outside the cells. It inhibits the growth of the influenza virus in vitro and inhibits the replication of the virus and its pathogenicity in vivo, reduces the secretion of influenza A and B viruses from the body. Its concentrations are required to suppress enzyme activity by 50% (IC50), located at the lower boundary of the nanomolar range.
Efficiency
It has been proven that Tamiflu is an effective means of preventing and treating influenza in adolescents (over 12 years old), adults, the elderly and old people, as well as a treatment for influenza in children over 1 year old. At the start of treatment no later than 40 hours after the first symptoms of influenza, Tamiflu significantly reduces the period of clinical manifestations of influenza infection, reduces their severity and reduces the incidence of complications of influenza that require the use of antibiotics (bronchitis, pneumonia, sinusitis, otitis media), shortens the time the virus is released from the body and reduces the area under the "viral titers-time" curve.
When taken with a view prophylaxis Tamiflu significantly (by 92%) and reliably reduces the incidence of influenza among the people in contact, reduces the frequency of virus release and prevents the transmission of the virus from one family member to another.
Tamiflu does not affect the formation of anti-influenza antibodies, including the production of antibodies in response to the introduction of inactivated influenza vaccine.
During the period of circulation of the influenza virus among the population, one double-blind, placebo-controlled trial was conducted among children aged 1-12 years (mean age 5.3), who had fever accompanied by one of the respiratory symptoms (cough or acute rhinitis). In this study, 67% of patients were infected with virus A and 33% of patients were infected with virus B. Treatment with Tamiflu, which was started 48 hours after the onset of symptoms, significantly reduced the duration of the disease by 35.8 hours compared with placebo. The duration of the disease was defined as the period of time needed to reduce cough, runny nose, resolve fever and return to normal and normal activity. The proportion of pediatric patients who developed acute otitis media and who took Tamiflu decreased by 40% compared with placebo. Children who received Tamiflu returned to normal and normal activity almost 2 days earlier than children who received a placebo.
Virus resistance
According to currently available data, when taking Tamiflu for the purpose of post-contact (7 days) and seasonal (42 days) prevention of influenza drug resistance is not observed.
The frequency of transient release of influenza virus with a reduced sensitivity of neuraminidase to oseltamivir carboxylate in adult patients with influenza is 0.4%. The elimination of the resistant virus from patients receiving Tamiflu occurs without worsening the clinical condition of patients. The frequency of resistance of clinical isolates of influenza A virus does not exceed 1.5%. Among clinical isolates of influenza virus, drug-resistant strains were not found.

Patients with kidney damage
With the appointment of Tamiflu 100 mg 2 times a day for 5 days in patients with varying degrees of renal damage under the curve "plasma concentration of active metabolite - time" (AUC) is inversely proportional to a decrease in renal function.
Patients with liver damage
In vitro experiments showed that in patients with hepatic pathology, the AUC value of oseltamivir phosphate was not significantly increased, and the AUC of the active metabolite was not reduced.
Elderly patients
In patients of senile age (65 - 78 years), the AUC of the active metabolite in the equilibrium state was 25–35% higher than in younger patients when prescribing similar doses of Tamiflu. The elimination half-life of the drug in the elderly was not significantly different from that in younger patients of adult age. Given the data on the AUC of the drug and tolerability, patients with senile age do not require dose adjustment in the treatment and prevention of influenza.
Children
Tamiflu pharmacokinetics was studied in children from 1 year to 16 years in a pharmacokinetic study with a single dose of the drug and in a clinical study in a small number of children aged 3-12 years. In young children, excretion of pro-drug and the active metabolite was faster than in adults, which resulted in lower AUC relative to a specific dose.
Taking the drug at a dose of 2 mg / kg gives the same AUC of oseltamivir carboxylate, which is achieved in adults after a single dose of 75 mg capsule (equivalent to about 1 mg / kg).The pharmacokinetics of oseltamivir in children over 12
Years is the same as in adults.

- Treatment of influenza caused by viruses types A and B in adults and children over the age of 1 year.
Typical flu symptoms occur suddenly and include fever, cough, headache, severe weakness, muscle aches and sore throat.
- Prevention of influenza in adults and adolescents over the age of 12 years who are in groups of increased risk of infection with the virus (in military units and large production teams, in debilitated patients).

Prevention
The recommended dose of Tamiflu for the prevention of influenza after contact with an infected person is 75 mg 1 time per day orally for at least 7 days. The drug should be started no later than in the first 2 days after contact.
The recommended dose for prophylaxis during a seasonal flu epidemic is up to 75 mg 1 time per day; The efficacy and safety of the drug when taking it for 6 weeks is shown. Preventive effect lasts as long as taking the drug.
Suspension preparation:
1. Carefully tap the closed bottle several times with your finger so that the powder is distributed at the bottom of the bottle.
2. Measure 52 ml of water using a measuring cup (if attached), filling it to the specified level.
3. Add all 52 ml of water to the vial, close the cap and shake well for 15 seconds.
4. Remove the cap and insert the adapter into the neck of the bottle.
5. Screw the vial tightly with the cap to ensure that the adapter is properly positioned.
It is recommended to write on the bottle label the expiration date of the prepared suspension. Before using the bottle with the prepared suspension must be shaken. For dosing the suspension, a dosing syringe is attached with labels indicating dose levels of 30 mg, 45 mg and 60 mg.

For dosing the suspension, use the attached syringe (calibrated in mg), the required amount of the suspension is withdrawn from the vial with a dosing syringe, transferred to the measuring cup and taken orally.

Along with Tamiflu, it is possible to use symptomatic remedies to relieve certain manifestations of the flu, such as antipyretic.
Even if you already feel much better, the treatment should be completed, that is, take all 10 capsules of Tamiflu within 5 days.
If you forget to take Tamiflu, take the missed dose as soon as you remember it, but no later than 2 hours before the next dose. Then continue taking Tamiflu at the usual time. Do not take a double dose of Tamiflu. If you missed several doses in a row, consult your doctor.
Patients with impaired renal function and QC above 30 ml / min adjust the dose is not necessary. Have patients with CC less than 30 ml / min It is recommended to reduce the dose of Tamiflu to 75 mg 1 time / day for 5 days. Have patients with renal failure (CC less than 10 ml / min) the use of the drug has not been studied, therefore, its appointment must be careful.
To patients with impaired liver function dose adjustment is not required.
To the sick old age dose adjustment is not required.

Tamiflu is generally well tolerated. The most frequent adverse reactions are nausea and vomiting.Their probability can be reduced if you take the drug with meals. For other side effects not mentioned here, consult your doctor.

Currently, data on the use of the drug during pregnancy is not enough to assess the teratogenic or fetotoxic effect of oseltamivir phosphate, therefore it is usually not recommended to take Tamiflu during pregnancy and lactation.
If you are pregnant or may become pregnant during treatment with Tamiflu, check with your doctor before starting treatment.

Currently, overdose cases are not described.
Prospective the symptoms acute overdose: nausea with or without vomiting.
Single doses of Tamiflu up to 1000 mg were well tolerated, with the exception of nausea and vomiting.

Information obtained in pharmacological and pharmacokinetic studies of oseltamivir phosphate suggests that clinically significant drug interactions are unlikely.
Drug interactions caused by competition for the active centers of esterases that convert oseltamivir phosphate into an active substance are not described in detail in the literature. The low degree of binding of oseltamivir and the active metabolite with proteins does not suggest the existence of interactions associated with the displacement of drugs from the association with proteins.
In vitro experiments have demonstrated that neither oseltamivir phosphate nor the active metabolite is the preferred substrate for polyfunctional oxidases of the cytochrome P450 system or for glucuronyltransferases. There is no formal basis for interaction with hormonal oral contraceptives.
Cimetidine, a non-specific inhibitor of isoenzymes of the cytochrome P450 system, which competes in the course of canalicular secretion with alkaline drugs with cationic properties, does not affect the concentration of oseltamivir and its active metabolite in plasma.
Clinically significant drug interactions based on competition in the tubular renal secretion are unlikely due to the elimination of the active metabolite (glomerular filtration and anionic tubular secretion) and the excreting capacity of these two ways, as well as the large reserve of safety of Tamiflu. The simultaneous appointment of probenecid leads to an increase in the AUC of the active metabolite by about 2 times due to inhibition of active tubular secretion in the kidneys. However, dose adjustment with simultaneous use with probenecid is not required.
Taking Tamiflu with Paracetamol at the same time does not affect plasma concentrations of oseltamivir, its active metabolite, and paracetamol.
In Phase III clinical studies, Tamiflu was prescribed together with ACE inhibitors (enalapril, captopril), thiazide diuretics, penicillin, cephalosporins,azithromycin, Erythromycin , Doxycycline , histamine H2-receptors (ranhidine) Ibuprofen and paracetamol). Changes in the nature or frequency of adverse events were not observed.