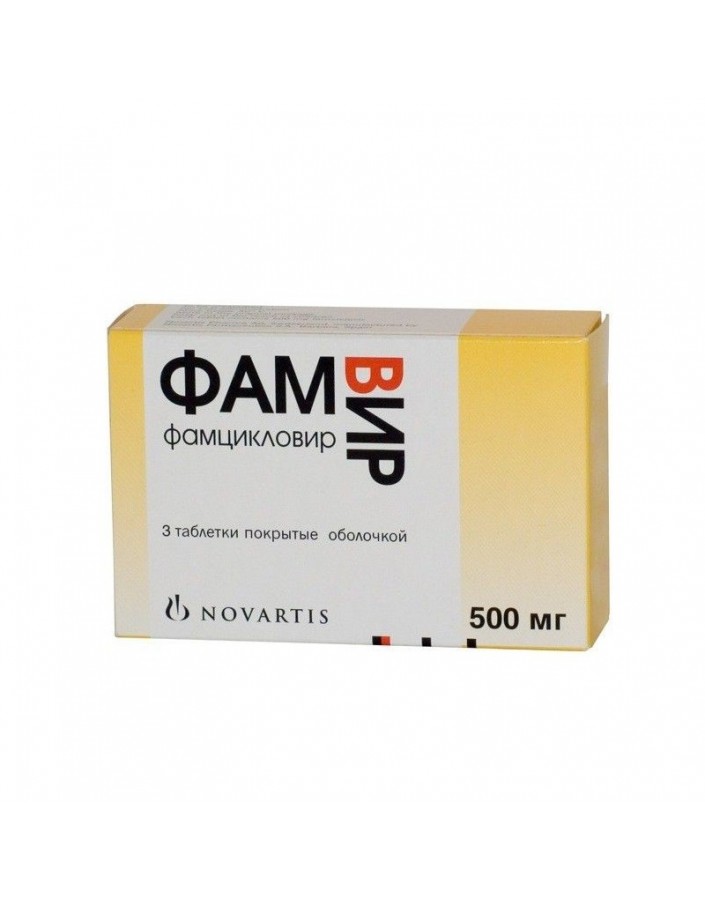 White coated tablets, round, biconvex, with beveled edges, engraved with "FV" on one side and "125" on the other.

In the package 3 pcs.

Famvir is an antiviral drug. After oral administration, famciclovir is rapidly converted to penciclovir, which is active against human herpes viruses, including the Varicella zoster virus (herpes zoster virus) and Herpes simplex types 1 and 2 (labial and genital herpes simplex virus), as well as Epstein-Barr virus and the cytomegalovirus virus.
Penciclovir enters the virus-infected cells, where under the action of viral thymidine kinase quickly turns into monophosphate, which, in turn, with the participation of cellular enzymes, goes into triphosphate. Penciclovir triphosphate is found in virus-infected cells for more than 12 hours, inhibiting viral DNA replication.
The concentration of penciclovir triphosphate in uninfected cells does not exceed the minimum detectable, therefore, in therapeutic concentrations, penciclovir does not affect uninfected cells.
Penciclovir is active against newly discovered acyclovir-resistant strains of the Herpes simplex virus with altered DNA polymerase.
The frequency of occurrence of resistance to famciclovir (penciclovir) does not exceed 0.3%, in patients with impaired immunity - 0.19%.
Resistance was detected at the beginning of treatment and did not develop in the course of treatment or after termination of therapy. Famciclovir has been shown to significantly reduce the severity and duration of postherpetic neuralgia in patients with herpes zoster.
It has been shown that in patients with impaired immunity due to HIV infection, famciclovir at a dose of 500 mg 2 times / day reduces the number of days of isolation of the herpes simplex virus (both with and without clinical manifestations).

Since the safety of Famvir in pregnant and lactating women has not been studied, its use during pregnancy and lactation is not recommended unless the possible benefits of treatment do not exceed the potential risk.It is not known whether penciclovir is excreted in human breast milk. Famciclovir does not have a pronounced effect on the spermogram, morphology, or motility of human sperm. In experimental studies, no embryotoxic and teratogenic effects of famciclovir and penciclovir were detected. Studies on famciclovir rats administered orally have shown that penciclovir is excreted in breast milk. A decrease in fertility was noted in an experimental model in male rats receiving famciclovir at a dose of 500 mg / kg body weight, and in female rats there was no marked decrease in fertility.

Patients with liver disease in the stage of compensation dose adjustment is required. There are no data on the use of famciclovir in severe decompensated chronic liver diseases, therefore, there are no precise guidelines for famciclovir dosing in this category of patients.
In patients with impaired renal function, there is a decrease in clearance of penciclovir. Adequate correction of the dosing regimen depending on QC is recommended.
Treatment should begin immediately after diagnosis. Caution should be exercised in the treatment of patients with impaired renal function, which may require correction dosing regimen.
Special precautions in elderly patients are not required.
Genital herpes is a sexually transmitted disease. During relapses, the risk of infection increases. In the presence of clinical manifestations of the disease, even in the case of the start of antiviral treatment, patients should avoid sexual intercourse.
During supportive treatment with antiviral agents, the frequency of spread of viral infection is significantly reduced, but the risk of transmission of infection theoretically exists.Therefore, patients should take appropriate protective measures during sexual intercourse.
The composition of the pills of the drug include lactose (107.4 mg). Famvir should not be used in patients with rare hereditary disorders associated with galactose intolerance, severe lactase deficiency or glucose-galactose malabsorption.
The transferred doses of Famvir and the duration of treatment. Famvir was well tolerated in the treatment of the infection caused by the Varicella zoster virus, when applied at a dose of 750 mg 3 times / day for 7 days; in patients with genital herpes with the use of the drug in a dose of up to 750 mg 3 times / day for 5 days and in a dose of up to 500 mg 3 times / day for 10 days. It was also shown that the drug was well tolerated when taking 250 mg 3 times / day for 12 months for the treatment of genital herpes. Famvir was well tolerated in patients with reduced immunity in the treatment of infections caused by the virus Varicella zoster, when taken 500 mg 3 times / day for 10 days, as well as infections caused by Herpes simplex viruses, when taken up to 500 mg 2 times / day for 7 days or 500 mg 2 times / day for 8 weeks.
The efficacy and safety of Famvir in children has not been established. Thus, famciclovir is not recommended for use in children, except in cases where the expected benefit of treatment justifies the potential risk associated with the use of the drug.
Influence on ability to drive motor transport and control mechanisms: Famvir is not expected to influence the ability of patients to drive cars and other mechanisms, but patientsin which, against the background of the use of the drug Famvir, dizziness, drowsiness, confusion or other disorders of the central nervous system occur, one should refrain from driving a car or controlling the mechanisms during the period of using the drug.

No clinically significant pharmacokinetic interaction of famciclovir with other drugs was noted. No effects of famciclovir on the cytochrome P450 system have been identified. Drugs that block tubular secretion may increase penciclovir concentration in plasma. In the course of the conducted clinical studies, no interaction of zidovudine and famciclovir was observed when they were taken together.

The described cases of overdose (10.5 g) of Famvir were not accompanied by clinical manifestations.
Treatment: conducting symptomatic and supportive therapy. When non-compliance with the recommendations to reduce the dose of famciclovir with regard to renal function in patients with kidney disease, cases of acute renal failure were noted. Penciclovir is excreted by hemodialysis. Plasciclovir plasma concentrations are reduced by 75% after hemodialysis for 4.