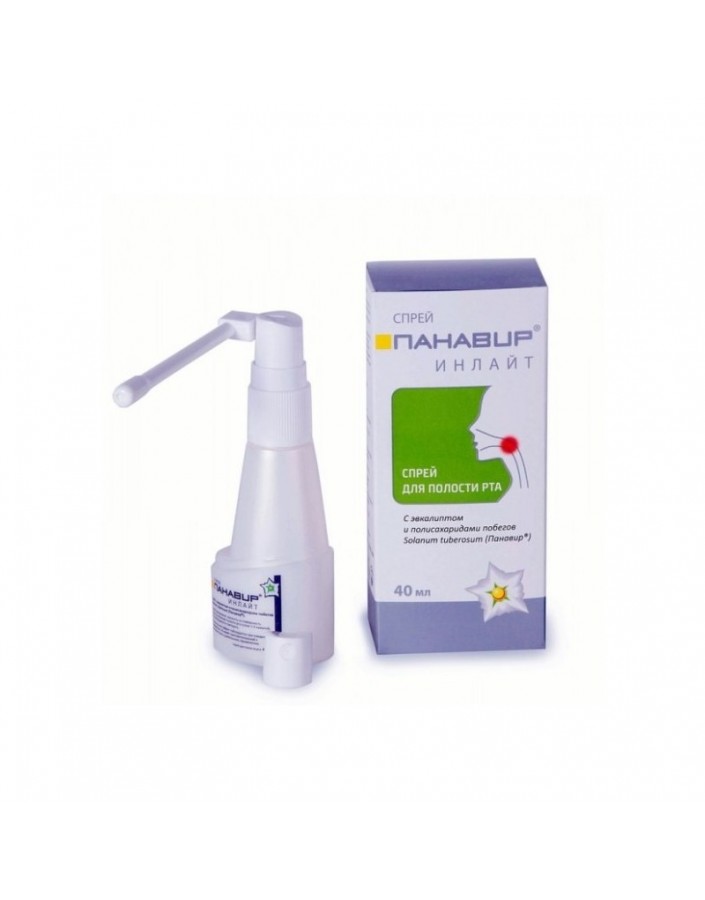 Gel "Spray Panavir Inlayt" is available in bottles of 40 ml.
The package is additionally equipped with a long nozzle for easy irrigation of cavities.

In a bottle of 40 ml of gel. In the package, additionally equipped with a long nozzle for easy irrigation of cavities, 1 bottle.

The active ingredient of Panavir Inlayt gel is a biologically active heteroglycoside of plant origin (Panavir), obtained from the quickly dividing seedlings of the plant Solanum tuberosum and belonging to the class of high-molecular hexose glycosides. Biologically active heteroglycoside in combination with a gel base has a complex effect, which includes antiviral, bactericidal, immunomodulating, anti-inflammatory, regenerating and protective.
Gel Panavir Inlayt has a direct antiviral effect on different types of DNA and RNA viruses: shingles virus (Herpes Zoster); herpes simplex viruses types 1 and 2; cytomegalovirus, various types of human papillomavirus, including oncogenic ones.
Gel Panavir Inlayt prevents the penetration of viruses into cells, inhibits the synthesis of viral proteins, thereby preventing the multiplication of the virus.
Gel Panavir Inlayt due to antiviral activity significantly reduces the toxic load and has a cytoprotective effect, protecting cells from exposure to viruses.
The protective action of Panavir Inlight is due to the unique buffer base, which contains complex compounds of lanthanum.
After application, Panavir Inlayt is localized in the middle layers of the epidermis or mucous membrane and forms a voluminous molecular network with selective capacity. Molecules of water, oxygen and nitrogen are freely passed through, ensuring the normal physiological functions of the skin and mucous membranes. At the same time, viruses, bacteria, fungi, spores of bacteria and fungi, high-molecular compounds - are delayed. The anti-inflammatory effect of Panavir Inlight is combined with a stimulating effect on humoral and cellular immunity factors.
The buffer base gel blocks the spread of inflammatory factors and toxic substances, especially after insect bites. Thus, antipruritic action is achieved when using Panavir Inlayt. The regenerating effect is manifested by the acceleration of the recovery of superficial cells of the skin and mucous membranes.

- Gel Panavir Inlayt is used to prevent and alleviate the symptoms of infectious and inflammatory diseases caused by viruses, bacteria and fungi.
- Prevention of infection and relief of symptoms with SARS, flu, viral rhinitis.
- Anti-inflammatory effect and improvement of regeneration in acute respiratory diseases.
- To improve the healing of the injured oral mucosa after visiting the dental office, with bleeding gums.
- Prevention and relief of symptoms in infectious and inflammatory diseases of the external genital organs, accompanied by a decrease in local immunity and a violation of the composition of the microflora.
- Prevention of infection with viral and bacterial sexually transmitted diseases. As an additional protection to traditional barrier products.
- Prevention of cervical cancer associated with human papillomavirus infection of the oncogenic type.
- At the phenomena of discomfort in the genital area, accompanied by itching, burning and dryness, including after sexual intercourse and hormonal changes in the body.
- During the rehabilitation period after the removal of papillomas and warts, including on the skin and mucous genital organs.

Individual intolerance to individual components of the drug.

Shake the vial before applying Panavir Inlayt. When applying keep the bottle in an upright position.
When applied externally, Panavir Inlayt is applied to the entire affected surface by 1-2 strokes of the valve, which is the optimal dose.
For intravaginal use of the drug is attached a special nozzle.It is a hollow tube with a length of 7 cm, at one end of which there is a sprayer, at the other end is a valve. The valve of a long nozzle is put on a bottle. Then the woman inserts a long nozzle into the vagina while lying on the back. By 1-2 clicks on the valve, the optimal amount of gel is injected into the vagina.
With occasional use of the gel and / or prolonged interruptions in use, the spray head may dry out. In this case, remove the protective cap and lower the bottle with the remnants of the gel for a while (spray head down) in a container with hot water. Then pump the head several times with energetic pressing it.
Use for the prevention of SARS and flu: during the rise in incidence or when in contact with a patient with ARVI, Panavir Inlayt is used 2 times a day, morning and evening, irrigating the mucous membrane of each nasal passage and the back wall of the oropharynx. To facilitate the application of the gel Panavir Inlayt, it is recommended to use an elongated nozzle. When applying the gel to irritated mucous membranes, perhaps a passing feeling of tickling. The maximum protective effect is observed with daily use in an unfavorable epidemiological period.
Use in infectious - inflammatory diseases of the oral cavity and larynx: gel Panavir Inlayt treat the affected areas 2 times a day, preferably in the morning and evening after meals.For irrigation of the larynx is more convenient to use the attached nozzle. During the introduction of the gel should hold your breath. To prevent re-infection, Panavir Inlight gel is recommended to be used within 5-7 days after the disappearance of clinical manifestations. Panavir Inlayt can be used for a long time, especially in an unfavorable epidemiological period.
Use for the prevention of infectious and inflammatory diseases of the genital organs and during the recovery period: intravaginally. The procedure should be carried out in the supine position and remain in that position for another 5-10 minutes after the introduction of the gel. Using the supplied nozzle, irrigate the vagina by 1-2 taps on the nozzle valve. The application must be continued until the complete disappearance of clinical manifestations. For the prevention of viral and bacterial infections, sexually transmitted infections, use the gel before intimate contact.