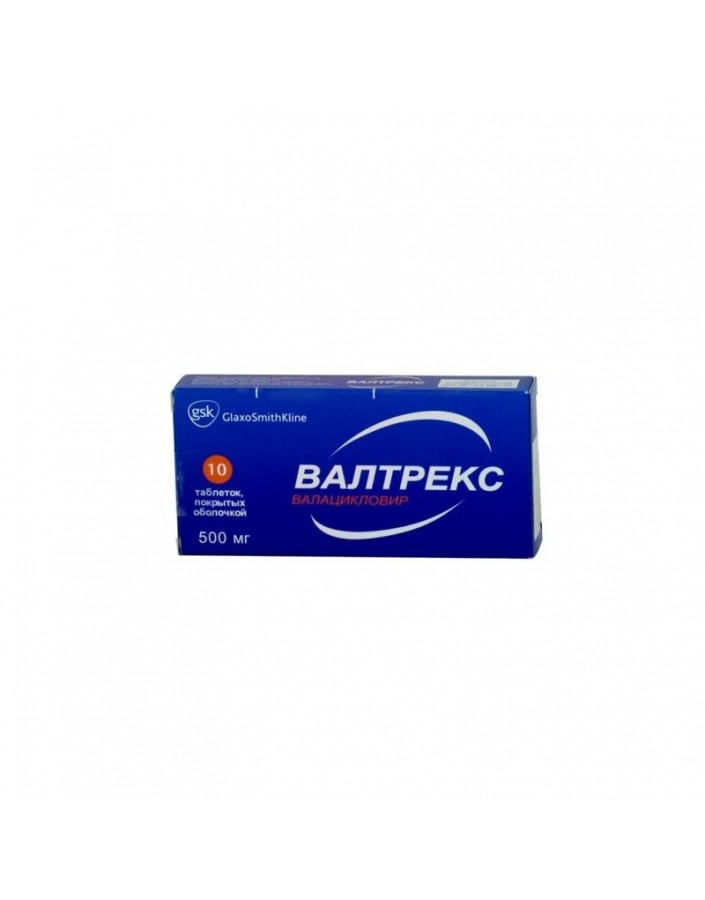 - treatment of shingles (Herpes zoster) (the drug helps relieve pain, reduces its duration and the percentage of patients with pain caused by shingles, including acute and postherpetic neuralgia);

- prevention (suppression) of recurrent infections of the skin and mucous membranes caused by HSV, including genital herpes;

- prevention of transmission of genital herpes to a healthy partner when taken as a suppressive therapy in combination with safe sex.

Drug Valtrex® taken regardless of the meal, the pills should be washed down with water.

Treatment of infections caused by HSV

The recommended dose for episode treatment is 500 mg 2 times / day for 5 days.

As an alternative for treating herpes simplex, Valtrex is effective.® at a dose of 2 g 2 times / day. The second dose should be taken approximately 12 hours (but not earlier than 6 hours) after taking the first dose. When using this dosing regimen, the duration of treatment is one day. Therapy should be started when the earliest symptoms of cold sores appear (ie tingling, itching, burning).

In patients with preserved immunity The recommended dose is 500 mg 1 time / day.

In patients with immunodeficiency The recommended dose is 500 mg 2 times / day.

Preventing the transmission of genital herpes to a healthy partner

Infected immunocompetent persons with relapses no more than 9 times a year, the recommended dose of the drug Valtrex® is 500 mg 1 time per day for a year or more each day.

Data on the prevention of infection in other populations of patients are not available.

The recommended dose is 2 g 4 times / day, appointed as soon as possible after transplantation.

The dose should be reduced depending on the clearance of creatinine.

The duration of treatment is 90 days, but in patients at high risk, treatment may be extended.

The dose of the drug Valtrex® it is recommended to decrease patients with a significant reduction in renal function (see dosing regimen in Table 1). In such patients, it is necessary to maintain adequate hydration.

Valtrex recommended® immediately after the end of the hemodialysis session in the same dose as in patients with creatinine clearance less than 15 ml / min.

Regimen Valtrex® at patients with impaired renal function Must be installed in accordance with Table 2 below.

* For patients on hemodialysis, Valtrex® should be administered after the end of the hemodialysis session.

It is often necessary to determine CC, especially during the period when the kidney function changes rapidly, for example, immediately after transplantation or transplant engraftment, while the dose of the drug Valtrex® adjusted in accordance with the indicators of QC.

Have adult patients with mild or moderate hepatic impairment with intact synthetic function dose adjustment of the drug Valtrex® not required.Pharmacokinetic data adult patients with severely impaired liver function (decompensated cirrhosis), in violation of the synthetic function of the liver and the presence of porto-caval anastomoses also do not indicate the need to adjust the dose of Valtrex®however, clinical experience with this pathology is limited.

No data on the use of the drug Valtrex® in children.

Dose adjustment is not required, with the exception of significant renal dysfunction. It is necessary to maintain an adequate water-electrolyte balance.

From the nervous system: often - a headache.

From the digestive tract: often nausea.

On the part of the blood system and the blood-forming organs: very rarely - leukopenia, thrombocytopenia. In general, leukopenia was observed in patients with reduced immunity.

On the part of the immune system: very rarely - anaphylaxis.

From the nervous system and psyche: rarely - dizziness, confusion, hallucinations, depression of consciousness; very rarely - agitation, tremor, ataxia, dysarthria, psychotic symptoms, convulsions, encephalopathy, coma.The above symptoms are mostly reversible and are usually observed in patients with impaired renal function or in comparison with other predisposing conditions. In adult patients with a transplanted organ receiving high doses (8 g / day) of the drug Valtrex® for the prevention of CMV infection, neurological reactions develop more often than when receiving lower doses.

On the part of the respiratory system and mediastinal organs: infrequently - shortness of breath.

Liver and biliary tract: very rarely - reversible violations of functional liver tests, which are sometimes regarded as manifestations of hepatitis.

On the part of the skin and subcutaneous fat: infrequently - rashes, including manifestations of photosensitivity; rarely itching; very rarely - urticaria, angioedema.

Other: in patients with severe impaired immunity, especially in adult patients with an advanced stage of HIV infection, receiving high doses of Valaciclovir (8 g / day) for a long period of time, there have been cases of renal failure, microangiopathic hemolytic anemia and thrombocytopenia (sometimes in combination) .Similar complications were noted in patients with the same primary and / or concomitant diseases, but not receiving valacyclovir.

- children's age up to 12 years with the prevention of cytomegalovirus (CMV) infection after transplantation;

- children's age up to 18 years for all other indications (due to the insufficient amount of data on clinical studies for the specified age group);

- Hypersensitivity to valacyclovir, Acyclovir and any other component that is included in the preparation.

- in patients with renal failure;

The data of registration records about the outcome of pregnancy in women who took Valtrex® or other drugs containing acyclovir (acyclovir is an active metabolite of the drug Valtrex®), did not reveal an increase in the number of birth defects in their children compared to the general population. Since the register includes a small number of women who took valacyclovir during pregnancy,then reliable and definitive conclusions about the safety of valaciclovir during pregnancy cannot be made.

Valaciclovir in unchanged form was not detected in the plasma of the mother, breast milk or urine of the child.

Drug Valtrex® should be prescribed with caution nursing women.

In patients with impaired liver function in patients with mild or moderate liver cirrhosis (synthetic liver function is maintained), Valtrex dose adjustment is not required. In the study of pharmacokinetics in patients with severe cirrhosis of the liver (with a violation of the synthetic function of the liver and the presence of shunts between the portal system and the general vascular bed), there is also no evidence of the need to correct the dosage regimen; however, clinical experience with the use of the drug Valtrex in this category of patients is organic.

There is no data on the use of Valtrex in high doses (4 g / day or more) in patients with liver disease, so you should be careful to prescribe the drug in high doses of this category of patients.

At renal failure dosing regimen set depending on creatinine clearance and indications.

For prevention of cytomegalovirus infections Valtrex is recommended to be given in the following doses.

Valtrex should be administered after the end of the hemodialysis session.

Frequent control of QC is needed, especially during the period when the kidney function is changing rapidly (including immediately after transplantation or transplant engraftment); Valtrex dose should be adjusted according to CC.

Experience with the clinical use of the drug in children is missing.

Elderly patients do not require dose adjustment, except in cases of significant impaired renal function. It is necessary to maintain an adequate water-electrolyte balance.

In patients at risk of dehydration, especially in elderly patients, it is necessary to ensure adequate fluid replenishment.

Since acyclovir is excreted by the kidneys, the dose of Valtrex® should be adjusted according to the degree of impaired renal function. In patients with renal failure, there is an increased risk of developing neurological complications, such patients should be carefully monitored. As a rule, these reactions are mostly reversible after drug withdrawal.

It is necessary to take into account the clinical condition of the patient and the adverse reaction profile of valacyclovir when assessing the patient's ability to drive a car or moving machinery.

Symptoms: acute renal failure and neurological disorders, including confusion, hallucinations, agitation, depression of consciousness and coma, as well as nausea and vomiting, were observed in patients who received doses higher than the recommended valaciclovir. Similar conditions were more common in patients with impaired renal function and elderly patients who received repeated higher than recommended doses of valaciclovir, due to non-compliance with the dosing regimen.

Treatment: patients must be under close medical supervision. Hemodialysis contributes significantly to the removal of acyclovir from the blood and can be considered the method of choice when managing patients with an overdose of Valtrex®.

Acyclovir is excreted by the kidneys, mostly unchanged by active renal secretion. The combined use of drugs with this mechanism of elimination can lead to an increase in plasma acyclovir concentration.

Care must be taken in the case of simultaneous use of the drug Valtrex.® at higher doses (4 g / day and above) and drugs that compete with acyclovir for the route of elimination, since there is a potential threat of an increase in plasma concentrations of one or both drugs or their metabolites. An increase in the AUC of acyclovir and the inactive metabolite of mycophenolate mofetil, an immunosuppressive drug used in transplantation, while using these drugs, was noted.

Care must also be taken (monitoring kidney function) with the combination drug Valtrex® in higher doses (4 g / day and above) with drugs that affect other kidney functions (for example, cyclosporine, tacrolimus).

The drug should be stored at a temperature not exceeding 30 ° C out of the reach of children.