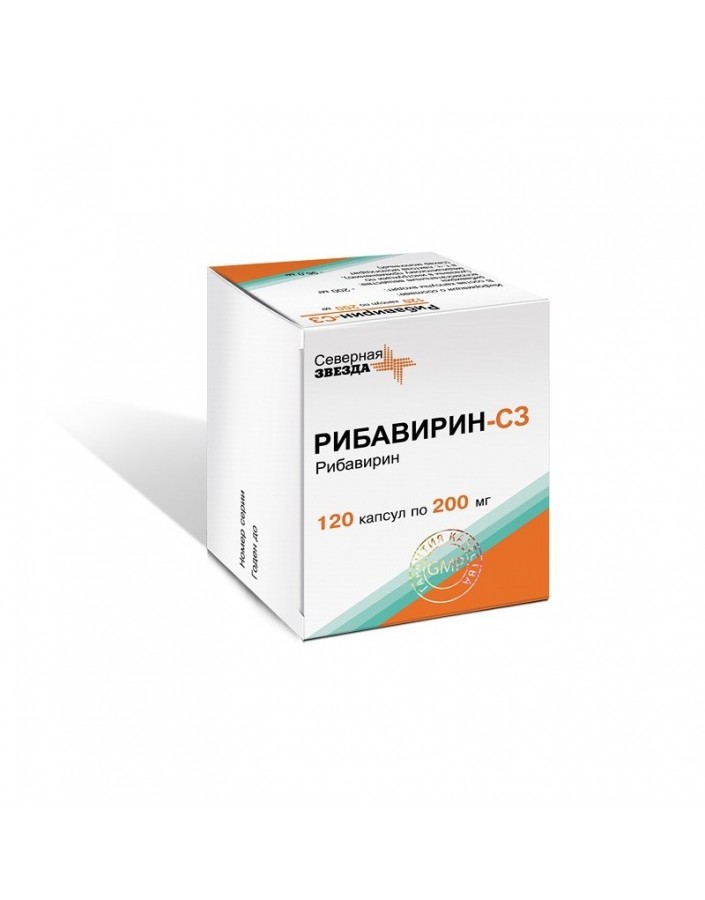 White capsules No 0. The contents of the capsules are white or white powder.

Ribavirin is a synthetic nucleoside analogue with a pronounced antiviral

action. It has a wide spectrum of activity against various DNA and RNA viruses.

These metabolites, especially ribavirin triphosphate, have pronounced antiviral activity. The mechanism of action of ribavirin is not clear enough. However, it is known that ribavirin inhibits inosine monophosphate dehydrogenase (IMP), this effect leads to a pronounced decrease in the level of intracellular guanosine triphosphate (GTP),which, in turn, is accompanied by the suppression of the synthesis of viral RNA and virus specific proteins. Ribavirin inhibits the replication of new virions, which reduces

that the mechanism of the synergistic effect of ribavirin and Interferon alpha against HCV is due to increased ribavirin phosphorylation by interferon.

- Absorption: for oral administration, ribavirin is rapidly absorbed in the gastrointestinal tract.

Moreover, its bioavailability is more than 45%. Distribution:

Ribavirin is distributed in the plasma, secretion of the mucous membrane of the respiratory tract and red blood cells.

A large amount of ribavirin triphosphate accumulates in the erythrocytes, reaching a plateau by day 4 and persisting for several weeks after administration. The half-distribution period is 3.7 hours. The volume of distribution (Vd) is 647 - 802 l. In exchange, ribavirin accumulates in plasma in large quantities. The ratio of bioavailability (AUC is the area under the curve "concentration / time") with repeated and single dose is 6. A significant concentration of ribavirin (more than 67%) can be detected in the cerebrospinal fluid after prolonged use. Slightly binds to plasma proteins. The time to reach maximum plasma concentration is from 1 to 1.5 hours. The time to achieve therapeutic plasma concentration depends on the magnitude of the minute volume of blood. The average maximum concentration (Cmax) in plasma: about 5 μmol per liter at the end of 1 week of administration at a dose of 200 mg every 8 hours and about 11 μmol per liter at the end of 1

- Biotransformation: ribavirin is phosphorylated in liver cells into active metabolites in the form of mono-, di-, and triphosphate, which are then metabolized to 1,2,4-triazolecarboxamide (amide hydrolysis to tricarboxylic acid and de-ribozylation to form a triazole carboxylic metabolite).

- Excretion: Ribavirin is slowly eliminated from the body. The half-life (T1 / 2) after a single dose of 200 mg is from 1 to 2 hours from plasma and up to 40 days from red blood cells.After cessation of the course intake, T1 / 2 is about 300 hours. Ribavirin and its metabolites are mainly excreted by the kidneys. Only about 10% is excreted through the intestines. In unchanged form, about 7% of ribavirin is eliminated in 24 hours and about 10% in 48 hours. Pharmacokinetics in special clinical conditions: When taking the drug in patients with renal insufficiency, the AUC and Cmax of ribavirin increase, which is due to a decrease in the true clearance. In patients with hepatic insufficiency (A, B and C degrees), ribavirin pharmacokinetics do not change. After taking a single dose with food containing fats, ribavirin pharmacokinetics changes significantly (AUC and Cmax increase by 70%).

severe depression with suicidal intent, childhood and adolescence (up to 18 years).

The drug should be taken orally, without chewing and drinking water, together with food intake of 0.8 -1.2 g per day in 2 divided doses (in the morning and in the evening). At the same time, interferon alfa-2b is prescribed subcutaneously, in doses of 3 million IU 3 times a week or peginterferon alpha 2b subcutaneously, 1.5 mcg / kg 1 time per week. When combined with interferon alpha-2b with body weight up to 75 kg, the dose of ribavirin is 1 g per day (0.4 g in the morning and 0.6 g in the evening); above 75 kg - 1.2 g in

- On the side of the cardiovascular system: a decrease or increase in blood pressure, brady- or tachycardia, palpitations, cardiac arrest.

- From the side of blood-forming organs: hemolytic anemia, leukopenia, neutro

- For the senses: damage to the lacrimal gland, conjunctivitis, blurred vision, impairment / loss of hearing, tinnitus.

- For the musculoskeletal system: arthralgia, myalgia.

Interaction with other drugs.

Drugs containing compounds of magnesium and aluminum, simethicone reduce the bioavailability of the drug (AUC is reduced by 14%, has no clinical significance).

When combined with interferon alpha-2b or peginterferon alpha-2b-synergism action. The administration of ribavirin during treatment with zidovudine and / or stavudine is accompanied by a decrease in their phosphorylation, which can lead to HIV viremia and require changes in the treatment regimen. Increases the concentration of phosphorylated metabolites of purine nucleosides (including didanosine, abacavir) and the associated risk of developing lactic acidosis. Does not affect the enzymatic activity of the liver with the participation of cytochrome P450. Simultaneous high-fat meals increase the bioavailability of ribavirin (AUC and Cmax increase by 70%).

Consider the teratogenicity of the drug, men and women of reproductive age during treatment and within 7 months after the end of therapy should use effective contraceptives.Laboratory

potentially hazardous activities that require increased concentration of attention and quickness of psychomotor reactions. In connection with the possible deterioration of renal function in elderly patients, before using the drug, it is necessary to determine renal function, in particular, creatinine clearance.

List B.In a dry, dark place, at a temperature not higher than 25 ° C. Keep out of the reach of children.