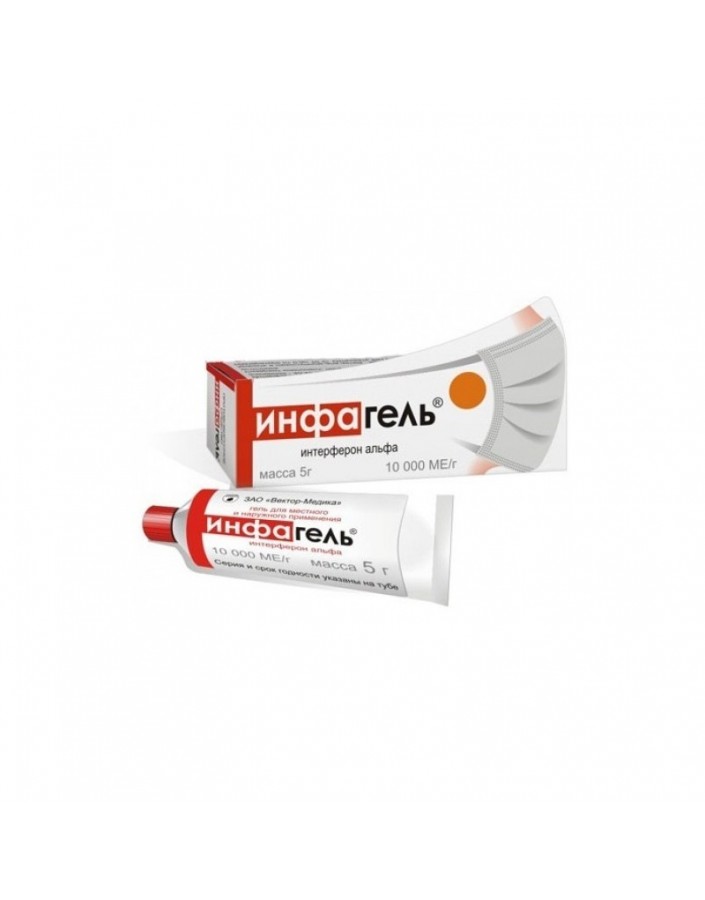 Infagel is a good antiviral and antitumor agent. It consists of recombinant Interferon alpha 2, which has high activity against many virusesit relieves inflammation well, reduces the activity of tumor growth and strengthens the immune system. Interferon is used to treat local detection of a viral infection or for prophylactic purposes.

By the nature of the therapeutic effects of this drug is attributed to the means of immunomodulatory properties.

Applied on the skin ointment, absorbed into the blood vessels and intercellular fluid. The largest part of the drug is concentrated in the layers of the skin, inside the cells.

As a rule, the maximum saturation of interferon in the deep layers of the skin occurs only after 3 to 4 hours after application.

Infagel is effectively used to get rid of the following diseases:

Ointment should be used 7 - 8 days, 2 - 3 times a day. Between the procedures, the time interval should not be longer than 1 to 12 hours. The ointment should be left open after a few minutes to form a protective film on the skin.

Flu and SARS - ointment lay in the nose 2-3 times a day for at least a week. As a prevention, ointment is used before each exit to the street. This should be done throughout the epidemiological season, but not more than 1 month.

Conjunctivitis in newborns - ointment is put on the eyelid of the child for 2 to 3 days. The procedure is repeated several times a day.

With chickenpox Infagel needs to lubricate red spots (but not bubbles). The ointment is easily rubbed with a very thin layer 3 times a day for 7 days. The entire skin does not need to be lubricated; it is necessary to process the rashes directly.

Herpes - ointment applied to the affected skin. After the formation of the crust is not so much swelling and itching. Ointment should be applied at least 2 times a day until the disappearance of herpes manifestations. As a rule, the disease retreats for 4 - 7 days.

It is best to store Infagel at a temperature of from 0 to +10 degrees, namely in the refrigerator.

There are contraindications to consult a doctor.