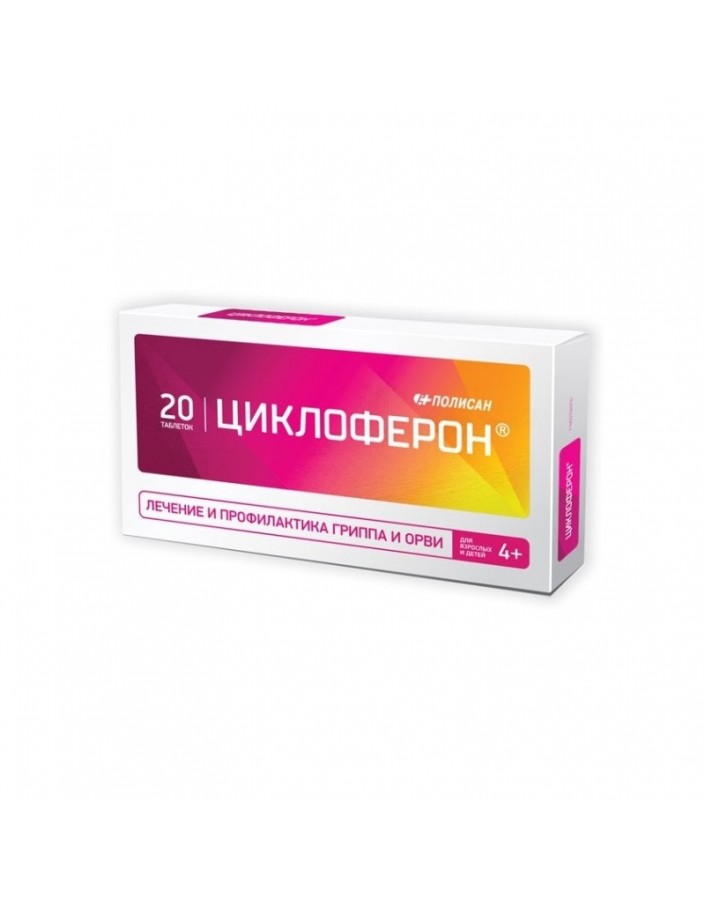 Farm group: Antiviral and immunomodulatory drugs. Interferon synthesis inductor.
Pharmaceutical action: Immunomodulator. Cycloferon® is a low molecular weight inducer of interferon, which determines a wide range of its biological activity (antiviral, immunomodulatory, anti-inflammatory).
Cycloferon® is effective against herpes viruses, influenza and other causative agents of acute respiratory diseases.
It has a direct antiviral effect, inhibiting the reproduction of the virus in the early stages (1-5 days) of the infectious process, reducing the virulence of the viral progeny, leading to the formation of defective viral particles. Increases non-specific resistance of the organism against viral and bacterial infections.
Pharmacokinetics: Absorption
After taking the drug inside in a daily dose of Cmax in the blood plasma is reached after 2-3 hours, the concentration gradually decreases by 8 hours, after 24 hours the active substance is detected in trace amounts.
Removal
T1 / 2 makes 4-5 hours. Use of the drug Cycloferon® in recommended doses does not create conditions for its cumulation in the body.

Pregnancy, breastfeeding, liver cirrhosis.
In diseases of the thyroid gland, cycloferon is administered under the control of an endocrinologist.

Well tolerated by the sick. Adverse effects during use have not been identified.

Cycloferon is compatible and well combined with all drugs traditionally used in the treatment of these diseases (antibiotics, Chemotherapy, etc.).

Using Cycloferon for emergency nonspecific prevention and treatment of influenza and other acute respiratory infections: the drug is taken orally once a day on an empty stomach according to the scheme: 1 day - 4 pills all at once, for 2, 4, 6 days - 2 pills each. A total of 10 pills per course (one pack) Cycloferon is used orally in adults once a day, half an hour before meals, without chewing, according to the basic scheme, 2-4 pills per dose in 1, 2, 4, 6, 8, 11, 14, 17, 20, 23 days depending on the nature of the disease

Before taking the drug, it is necessary to consult a doctor for patients with diseases of the digestive system in the acute phase (erosion, gastric and / or duodenal ulcers, gastritis, duodenitis) and allergic reactions in the anamnesis.
In diseases of the thyroid gland, cycloferon should be administered under the supervision of an endocrinologist.
If the next dose of the drug is missed, then it should be continued at the first opportunity, without taking into account the time interval and doubling the dose, to continue the course of treatment according to the scheme started.
In the absence of a therapeutic effect, the patient should consult a doctor.
Influence on ability to drive motor transport and control mechanisms
Cycloferon® does not affect the ability to drive.