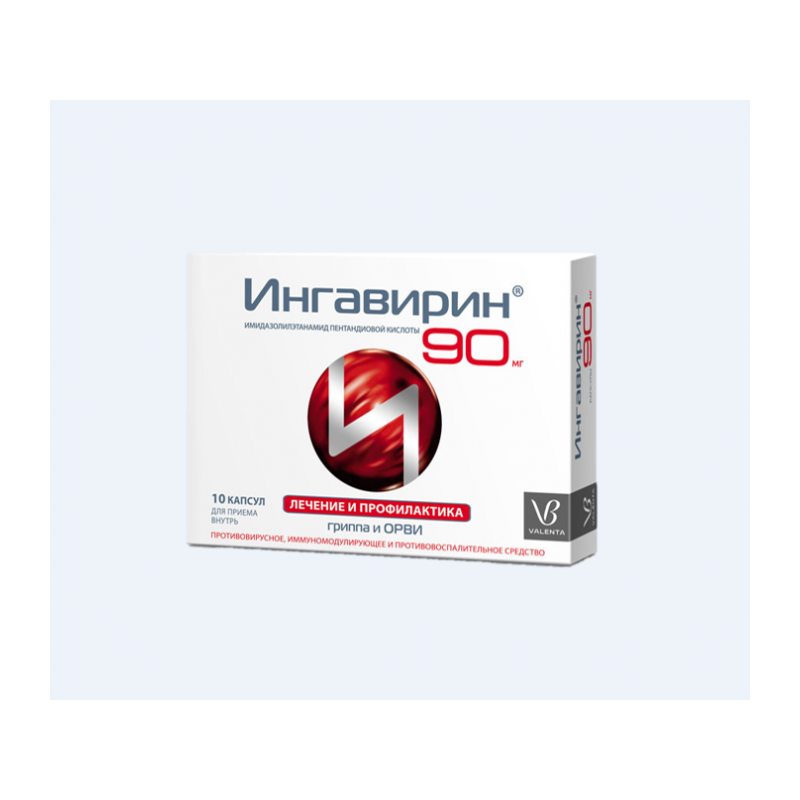 Ingavirin has antiviral effect, is effective against influenza viruses types A and B, adenoviral infection. In an in vitro and in vivo experiment, it effectively suppresses the reproduction and cytopathic effect of influenza A and B viruses, adenoviruses. Antiviral mechanism of action - the suppression of the reproduction of the virus at the stage of the nuclear phase, the delayed migration of the newly synthesized NP virus from the cytoplasm to the nucleus. It has a modulating effect on the functional activity of the Interferon system: it causes an increase in the content of interferon in the blood to the physiological norm, stimulates and normalizes the reduced a-interferon, the production capacity of blood leukocytes, stimulates the y-interferon production capacity of leukocytes. It causes the generation of cytotoxic lymphocytes and increases the content of NK-T cells with high killer activity against viral-transformed cells and pronounced antiviral activity.Anti-inflammatory effect due to the suppression of the production of key pro-inflammatory cytokines, a decrease in the activity of myoperoxidase. Therapeutic efficacy in influenza is manifested in shortening the period of fever, reducing intoxication (headache, weakness, dizziness), catarrhal phenomena, reducing the number of complications and the duration of the disease as a whole.

Conducted toxicological studies indicate a low toxicity and high safety profile of the drug {LD50 exceeds therapeutic dose more than 3000 times). It was established that the drug does not have a mutagenic and carcinogenic effect, does not affect the reproductive function, does not possess immunotoxic and allergenic properties, and does not have a local irritating effect.

Treatment of flu. If necessary, combined with the reception of symptomatic agents

Individual intolerance to the components of the drug, pregnancy, children under 18 years of age.

Ingavirin should be taken orally 90 mg once a day, for 5 days, regardless of the meal.
Taking the drug should be started from the moment the first symptoms of the disease appear, no later than 36 hours after the onset of the disease.

Ingavirin does not have a sedative effect, does not affect the speed of the psychomotor reaction and can be used in people of various professions, including requiring increased attention and coordination of movements.It is not recommended to take other antiviral drugs at the same time.

In a dry, dark place and out of reach of children at a temperature not exceeding 25 ° C.