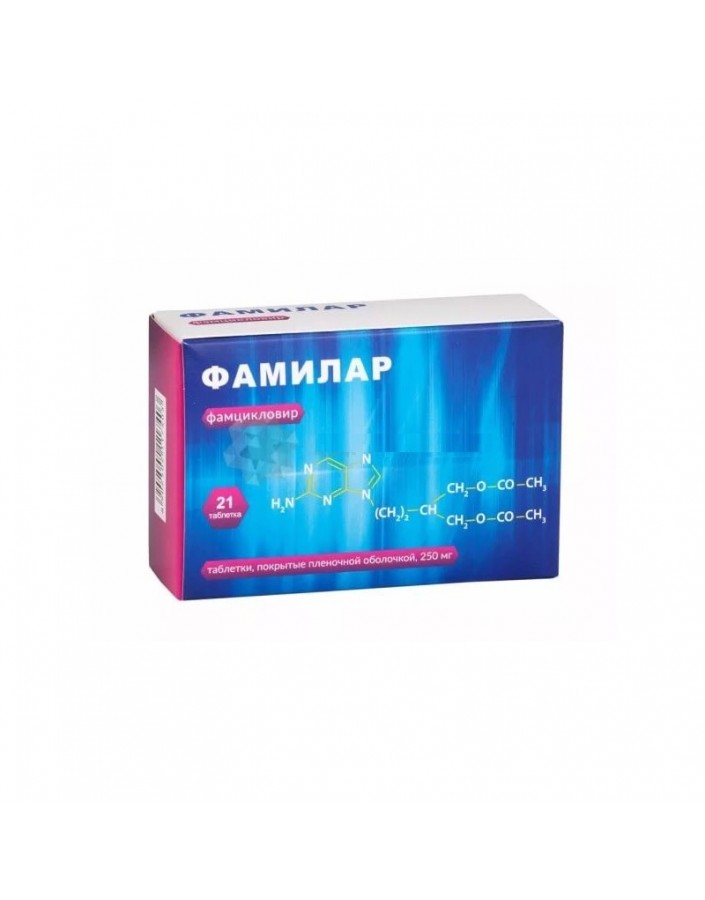 Antiviral agent. After oral administration, famciclovir in vivo is rapidly transformed into penciclovir, which has in vivo and in vitro activity against human herpes viruses, including the Varicella zoster and Herpes simplex types 1 and 2 viruses, as well as Epstein-Barr virus and the cytomegalovirus.

Famciclovir significantly reduces the intensity and duration of postherpetic neuralgia in patients with herpes zoster.

In a placebo-controlled study in patients with immunodeficiency due to HIV infection, famciclovir at a dose of 500 mg 2 times / day reduced the number of days for isolation of the Herpes simplex virus (with or without clinical manifestations).

With repeated doses of the drug cumulation is not observed. The plasma protein binding of penciclovir and its 6-deoxy precursor is less than 20%.

T1/2 penciclovir from plasma in the final phase after administration of single and repeated doses is about 2 hours.

Treatment should begin immediately after diagnosis.

When ingested a single dose - 250-500 mg. The frequency and duration of use depend on the evidence, immune status, renal function, treatment effectiveness.

Hypersensitivity to famciclovir and penciclovir.

Since the safety of famciclovir during pregnancy and lactation has not been studied, the use is not recommended, unless the expected benefit of therapy for the mother outweighs the potential risk to the fetus or infant.

It is not known whether penciclovir is excreted in human breast milk.

Famciclovir does not have a pronounced effect on the spermogram, morphology, or motility of human sperm.

In experimental studies, no embryotoxic and teratogenic effects of famciclovir and penciclovir were detected.

Studies on rats fed famciclovir orally have shown that penciclovir is excreted in breast milk.

Use with caution in patients with impaired renal function.

Use with caution in patients with impaired renal function.

In the presence of clinical manifestations of genital herpes, even in the event of the start of antiviral treatment, patients should avoid sexual intercourse.

Probenecid and other drugs that affect kidney function may alter penciclovir plasma levels.