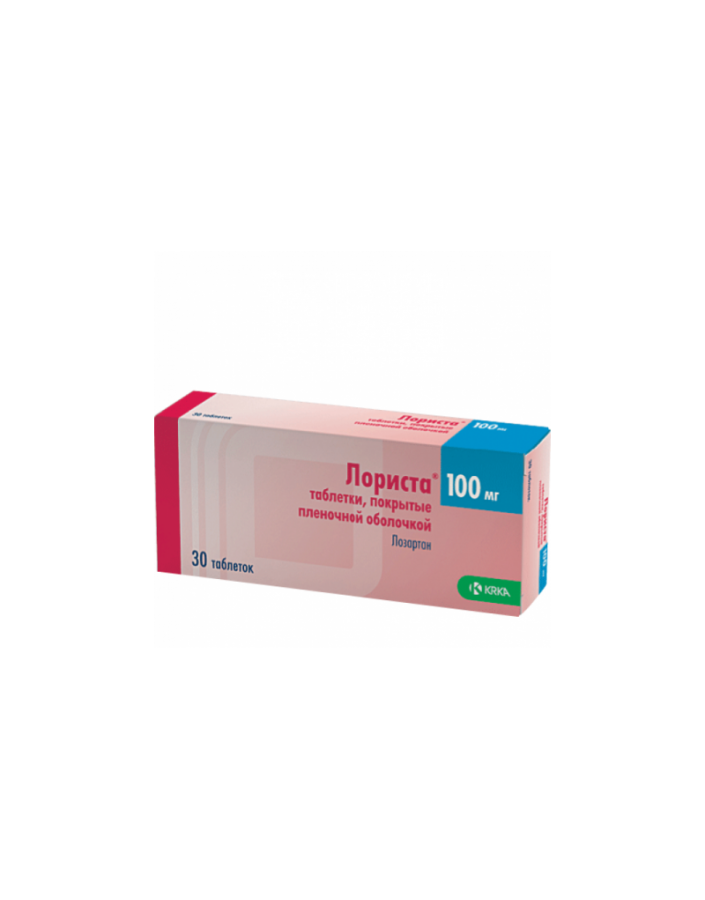 - reducing the risk of stroke in patients with arterial hypertension and left ventricular hypertrophy;

- chronic heart failure (as part of combination therapy, with intolerance or failure of therapy with ACE inhibitors);

- protection of kidney function in patients with type 2 diabetes mellitus with proteinuria to reduce proteinuria, reduce the progression of kidney damage, reduce the risk of end-stage development (preventing the need for dialysis, the likelihood of increased serum creatinine) or the onset of death.

The drug is taken orally, regardless of the meal, the multiplicity of reception - 1 time / day.

At hypertension the average daily dose is 50 mg. The maximum antihypertensive effect is achieved within 3-6 weeks of therapy. It is possible to achieve a more pronounced effect by increasing the dose of the drug to 100 mg / day in two doses or in one step.

When receiving diuretics in high doses, it is recommended to start Loristoy's therapy with 25 mg / day in a single dose.

Elderly patients patients with impaired renal function (including hemodialysis patients) no correction of the initial dose of the drug is required.

Patients with impaired liver function the drug should be prescribed in a lower dose.

At chronic heart failure The initial dose of the drug is 12.5 mg / day in a single dose. In order to achieve the usual maintenance dose of 50 mg / day, the dose must be increased gradually, at intervals of 1 week (for example, 12.5 mg, 25 mg, 50 mg / day). LORISTA ® usually prescribed in combination with diuretics and cardiac glycosides.

The scheme of increasing the dose of the drug is presented in the table.

For reduce the risk of stroke in patients with arterial hypertension and left ventricular hypertrophy The standard initial dose is 50 mg / day. In the future, hydrochlorothiazide may be added in low doses and / or the dose of Loristy may be increased to 100 mg / day.

For to protect the kidneys in patients with type 2 diabetes with proteinuria The standard initial dose of Loristy is 50 mg / day. The dose of the drug can be increased to 100 mg / day, taking into account the reduction of blood pressure.

On the part of the respiratory system: ≥1% - nasal congestion, cough *, infections of the upper respiratory tract, pharyngitis, dyspnea, bronchitis, swelling of the nasal mucosa.

From the musculoskeletal system: ≥1% - cramps, myalgia *, pain in the back, chest, legs; <1% - arthralgia, arthritis, pain in the shoulder, knee, fibromyalgia.

* - side effects, the incidence of which is comparable to placebo.

In most cases Lorista® well tolerated, side effects are weak and transient in nature and do not require discontinuation of the drug.

- hypersensitivity to Losartan and / or other components of the drug.

WITH caution the drug should be used for hepatic and / or renal failure, reduced BCC, impaired water and electrolyte balance, bilateral stenosis of the renal arteries or stenosis of the artery of a single kidney.

No data on the allocation of losartan with breast milk. Therefore, it is necessary to decide on the termination of breastfeeding or discontinuation of therapy with losartan, taking into account its importance to the mother.

Patients with a history of liver disease therapy is recommended lower doses.

Caution is prescribed losartan to patients with impaired renal function, bilateral renal artery stenosis, or unilateral stenosis of a single kidney artery. The concentration of potassium, urea, and serum creatinine should be regularly monitored.

The drug is contraindicated for the treatment of children and adolescents under the age of 18, because there is no experience in the use of the drug in pediatrics.

Elderly patients no correction of the initial dose of the drug is required.

In patients with reduced BCC (for example, in the treatment of large doses of diuretics), symptomatic hypotension may develop.Prior to taking losartan, it is necessary to eliminate the existing disorders, or to begin therapy with small doses.

In patients with mild and moderate cirrhosis of the liver, the concentration of losartan and its active metabolite in the blood plasma after oral administration is higher than in healthy ones. Therefore, in patients with a history of liver disease, therapy in lower doses is recommended.

Drugs acting on the renin-angiotensin system can increase serum urea and creatinine in patients with bilateral renal artery stenosis or unilateral arterial stenosis of a single kidney. Changes in renal function may be reversible after discontinuation of therapy. During treatment, it is necessary to regularly monitor the concentration of creatinine in the serum at regular intervals.

The drug is contraindicated for the treatment of children and adolescents under the age of 18, because there is no experience in the use of the drug in pediatrics.

Data on the effect of losartan on the ability to manage transport or other technical means are not available.

During concurrent administration with rifampicin and Fluconazole , a decrease in the active metabolite level of losartan potassium was observed. The clinical consequences of this phenomenon are unknown.

Simultaneous use with potassium-sparing diuretics (for example, spironolactone, triamterene, amiloride) and potassium preparations increases the risk of hyperkalemia.

The simultaneous use of NSAIDs , including selective inhibitors of COX-2, may reduce the effect of diuretics and other antihypertensive drugs.

If losartan is prescribed simultaneously with thiazide diuretics, the reduction in blood pressure is approximately additive. Enhances (mutually) the effect of other antihypertensive drugs (diuretics, beta-blockers, sympatholytics).

List B. The drug should be kept out of the reach of children, in a dry place at a temperature not exceeding 30 ° C.