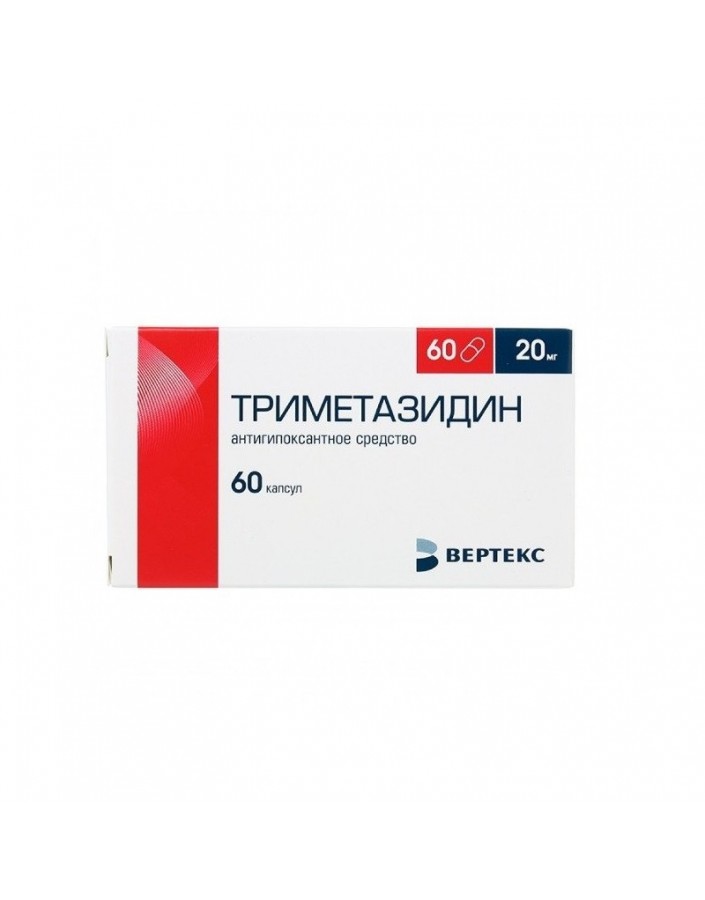 The drug is taken orally during meals.

The recommended dosage regimen is 2-3 capsules (40-60 mg) / in 2-3 doses. The doctor sets the course of treatment individually.

Antihypoxic and antianginal drug. Directly affecting the cardiomyocytes and neurons of the brain, optimizes their metabolism and function. The cytoprotective effect is due to increased energy potential, activation of oxidative decarboxylation and rationalization of oxygen consumption (increased aerobic glycolysis and blockade of fatty acid oxidation). Supports myocardial contractility, prevents a decrease in the intracellular content of ATP and phosphocreatine.Under conditions of acidosis, it normalizes the functioning of membrane ion channels, prevents the accumulation of Calcium and sodium in cardiomyocytes, and normalizes the intracellular content of potassium ions. Reduces intracellular acidosis and phosphate content due to myocardial ischemia and reperfusion. Interferes with the damaging effects of free radicals, preserves the integrity of cell membranes, prevents activation of neutrophils in the ischemic area, increases the duration of electrical potential, reduces the release of CPK from cells and the severity of ischemic myocardial damage.

Hearing and results of vestibular samples in patients are improved, dizziness and tinnitus are reduced.

When vascular pathology of the eye restores the functional activity of the retina.

After taking the drug inside Trimetazidine quickly and almost completely absorbed from the gastrointestinal tract. Bioavailability - 90%. The time to reach Cmax in the blood plasma is 2 hours. After a single dose of Trimetazidine at a dose of 20 mg, Cmax is about 55 ng / ml.

From the side of the central nervous system:rarely a headache.

Currently, no cases of overdose have been reported.

On the background of drug treatment in patients with coronary artery disease there is a significant decrease in the daily need for nitrates.

The drug does not affect the ability to drive vehicles and perform work that require high-speed psychomotor reactions.

List B. The drug should be kept out of the reach of children, dry, protected from light, at a temperature not exceeding 25 ° C. Shelf life- 2 years.