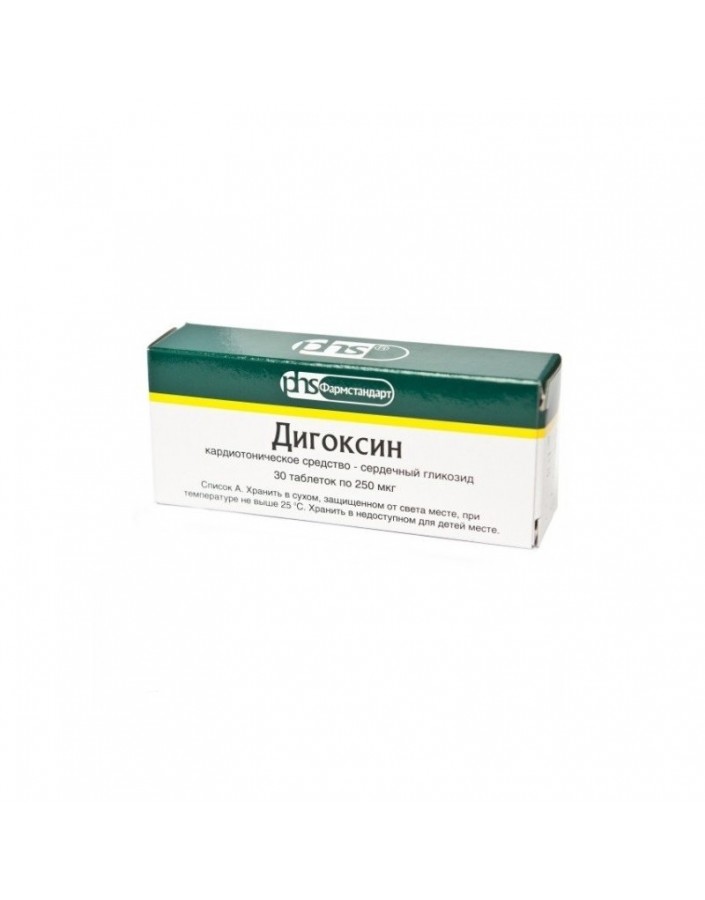 Cardiac glycoside, found in digitalis woolly. It has a positive inotropic effect, which is associated with an inhibitory effect on Na+-K+ ATPase of the cardiomyocyte membrane, which leads to an increase in the intracellular content of sodium ions and a decrease in potassium ions. As a result, an increase in intracellular Calcium occurs, which is responsible for the contractility of cardiomyocytes, which leads to an increase in the strength of myocardial contractions. Increases the work of the heart, while extending diastole. It has a negative chronotropic effect. The decrease in heart rate is largely associated with the cardio-cardiac reflex. Reduces excessive sympathetic activity by increasing the sensitivity of cardiopulmonary baroreceptors.
It causes an antiarrhythmic effect, which is due to the ability to reduce the rate of excitation through the AV node and lengthen the effective refractory period due to an increase in the activity of the vagus nerve either by direct action on the AV node, or due to a sympatolytic effect. In medium doses, does not affect the speed and refractoriness of the conducting system of His-Purkinje. At the same time, it shortens the effective refractory period of the atria and reduces the rate of conduction in them due to a reflex increase in the vagus nerve tone and a direct effect on the atria.Compared with other cardiac glycosides, the cardiotropic effect of digitoxin develops more slowly, while the duration of the effect (due to delayed elimination) is greatest.
Increases ventilation in response to hypoxia stimulation of chemoreceptors. It helps normalize kidney function and increase diuresis.

After ingestion is rapidly and completely absorbed from the gastrointestinal tract. In the case of reception after a meal, the absorption rate decreases, the degree of absorption does not change. Quickly distributed in tissues. The concentration of digoxin in the myocardium is significantly higher than in plasma.
The half-life is 34-51 hours. Within 24 hours, about 27% of digoxin is excreted in the urine.

Install individually. With moderately fast digitalization, they are applied orally at a dose of up to 1 mg / day in 2 doses. V / V - 750 mg / day in 3 administrations. Then the patient is transferred to the maintenance therapy: orally - 250-500 mcg / day, i.v. - 125-250 mcg. With slow digitalization, treatment immediately begins with a maintenance dose - up to 500 mcg / day in 1-2 doses.With paroxysmal supraventricular arrhythmias, 0.25–1 mg is injected into a jet or drip.
For children, the saturating dose is 0.05-0.08 mg / kg. This dose is administered within 3-5 days with moderately fast digitalization or within 6-7 days with slow digitalization. Supporting dose for children - 10-25 mg / kg / day.
In case of violation of the renal excretory function, it is necessary to reduce the dose: with CC 50-80 ml / min, the average maintenance dose is 1/2 of the average maintenance dose for persons with normal renal function; with CC less than 10 ml / min - 1/4 of the usual dose.

Digoxin is able to penetrate the placenta. The use of digoxin during pregnancy is possible only in cases where the intended benefit to the mother outweighs the possible risk to the fetus.
It is excreted in breast milk in small quantities. If necessary, use the mother during lactation requires heart rate control in the child.

With the simultaneous use of digoxin with diuretics, corticosteroids, insulin, calcium preparations, sympathomimetics, the risk of glycoside intoxication increases.
Antacids containing aluminum, Kolestiramine, tetracyclines, neomycin, anti-diarrheal adsorbents (kaolin, pectin), laxatives reduce the absorption of digoxin from the gastrointestinal tract.With simultaneous use with Amiodarone, quinidine, Verapamil, spironolactone, Erythromycin, the concentration of digoxin in the blood plasma increases.