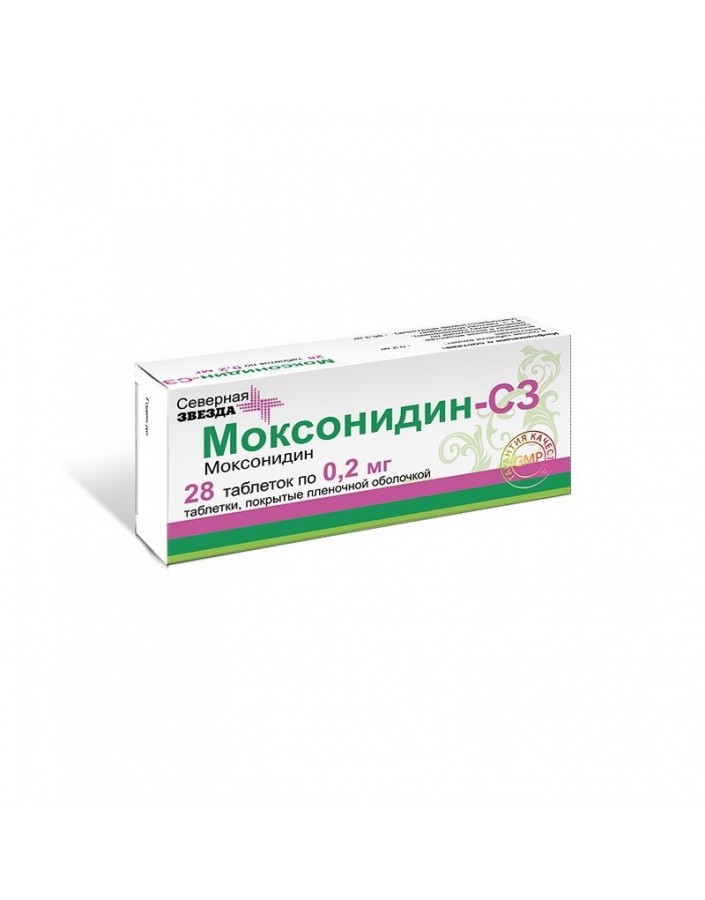 Pharmacodynamics
Selective imidazoline receptor agonist, responsible for tonic and reflex control over the sympathetic nervous system (localized in the ventro-lateral division of the medulla oblongata). Reduces blood pressure (BP). Slightly associated with central alpha2-adrenorensptorami, due to the interaction with which mediated dry mouth and sedation.
Reduces insulin resistance of tissues.
Effect on hemodynamics: a decrease in systolic and diastolic blood pressure with a single and prolonged dose of moxonidia is associated with a decrease in the pressor action of the sympathetic system on peripheral vessels, a decrease in peripheral vascular resistance, while cardiac output and heart rate do not change significantly.

Pharmacokinetics
Absorption after ingestion - 90%. Food intake does not affect the amount of absorption. Bioavailability - 88%. Communication with plasma proteins - 7%. WITHmax in plasma it is determined 30-180 minutes after oral administration and is 1-3 pg / ml. The volume of distribution - 1.4-3 l / kg. It passes through the hemato-encephalic barrier. Not cumulated with prolonged use. The half-life is 2-3 hours.The kidneys are displayed on 90% (70% - in unchanged form, 20% - in the form of metabolites). No significant differences in pharmacokinetics in young and elderly patients were found.

There are no clinical data on the negative impact on the course of pregnancy.However, care should be taken when prescribing moxonidine to pregnant women. During the period of treatment it is recommended to stop breastfeeding (penetrates into breast milk).

If you need to cancel simultaneously taken beta-blockers and moxonidine, first cancel beta-blockers and, only a few days later, moxonidine. It is not recommended to prescribe tricyclic antidepressants simultaneously with moxonidine. During treatment eliminated the use of alcohol. During treatment, regular monitoring of blood pressure, heart rate and ECG is necessary.
Moxonidine can be administered with thiazide diuretics, ACE inhibitors and blockers of “slow” Calcium channels.
Moxonidine should be discontinued gradually.

Inside, regardless of the meal, drinking plenty of water. In most cases, the initial dose of moxonidine is 0.2 mg per day, in one step, preferably in the morning. With a lack of therapeutic effect, the dose can be increased after 3 weeks of therapy to 0.4 mg per day in 2 doses or once. The maximum daily dose, which should be divided into 2 doses (morning and evening), is 0.6 mg.The maximum single dose is 0.4 mg.

Elderly patients with normal renal function Dosage recommendations are the same as for adult patients.

In patients with renal failure (clearance of cretinin 30-60 ml per minute) and patients undergoing hemodialysis, a single dose should not exceed 0.2 mg, the maximum daily dose of 0.4 mg.

Moxonidine may be administered with thiazide diuretics and “slow” calcium channel blockers. When moxonidine is used together with these and other antihypertensive drugs, there is a mutual reinforcement of the effect of moxonidine.
When moxonidine is administered with hydrochlorothiazide, glibenclamide (glyburide), or Digoxin, there is no pharmacokinetic interaction.
Tricyclic antidepressants can reduce the effectiveness of centrally acting antihypertensive drugs.
Beta-adrenergic blockers enhance bradycardia, the severity of negative insomnia and dromotropic action of moxonidine.
Moxinidine moderately enhances reduced cognitive ability in patients taking lorazepam.
The appointment of moxonidine in conjunction with benzodiazepines may be accompanied by an increase in the sedative effect of the latter.
In the appointment of moxonidine in conjunction with moclobemide pharmacodynamic interaction is absent.

Treatment:symptomatic. Gastric lavage (immediately after ingestion), the introduction of Activated carbon and laxatives, symptomatic therapy. In the case of a decrease in blood pressure, it is recommended to restore the circulating blood volume by administering a liquid. Bradycardia can be stopped by atropine. Alpha-adrenoreceptor antagonists can reduce or eliminate transient hypertension in overdose with moxonidine. As a specific antidote, idazoxane (an imidazoline antagonist) is administered.