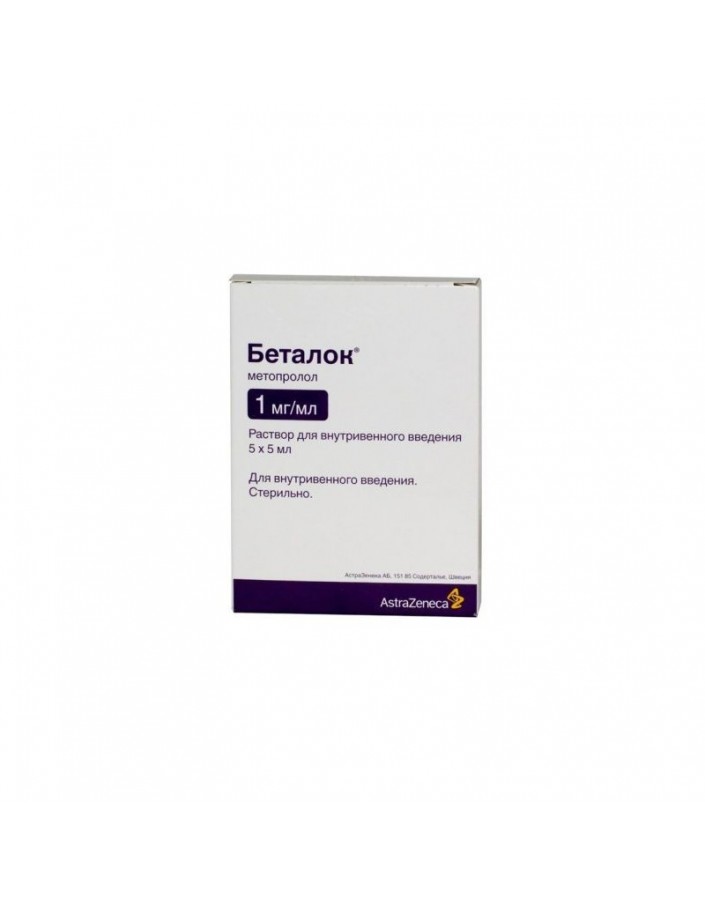 Metoprolol - β1β blocker1receptors at doses significantly lower than the doses required to block β2-receptors. Metoprolol has an insignificant membrane-stabilizing effect and does not exhibit partial agonist activity. Metoprolol reduces or inhibits the agonistic effect that catecholamines, which are formed during nervous and physical stress, have on cardiac activity.This means that metoprolol has the ability to prevent an increase in heart rate, minute volume and increased myocardial contractility, as well as an increase in blood pressure caused by the release of catecholamines. Patients with symptoms of obstructive pulmonary disease can, if necessary, be prescribed metoprolol in combination with β2adrenomimetics. When used together with β2- adrenomimetikami Betalok® in therapeutic doses to a lesser extent affects the called β2- adrenergic bronchodilation, than non-selective β-adrenergic blockers.

Metoprolol is less than non-selective β-blockers. We influence the production of insulin and carbohydrate metabolism. The effect of Betalok® on the reaction of the cardiovascular system in hypoglycemia is much less pronounced compared to non-selective β-blockers. Improving the quality of life during treatment with the drug Betaloc was observed in patients after myocardial infarction.

Pregnancy: toAs with most drugs, Betalok® should not be prescribed during pregnancy and during breastfeeding, unless the expected benefit to the mother outweighs the potential risk to the fetus. Like other antihypertensive drugs, β-blockers can cause side effects, such as bradycardia in the fetus, newborn or breastfed babies, and therefore you should be especially careful when prescribing β-blockers in the last trimester of pregnancy and immediately before delivery.

Lactation period: the amount of metoprolol released into breast milk and the β-blocking effect in a breastfed baby (when the mother takes metoprolol at therapeutic doses) are insignificant.

Supraventricular tachycardia: Begin administration with 5 mg (5 ml) of Betaloc at a rate of 1–2 mg / min. You can repeat the introduction at a 5-minute interval to achieve a therapeutic effect. Usually, the total dose is 10-15 mg (10-15 ml). The recommended maximum dose for intravenous administration is 20 mg (20 ml).

Prevention and treatment of myocardial ischemia, tachycardia and pain in myocardial infarction or suspicion of it: intravenous 5 mg (5 ml) of the drug. You can repeat the introduction with a 2-minute interval, the maximum dose - 15 mg (15 ml). 15 minutes after the last injection, metoprolol is prescribed for oral administration at a dose of 50 mg (Betalok) every 6 hours for 48 hours.

Renal impairment: There is no need to adjust the dose in patients with impaired renal function.

Liver dysfunction: usually due to the low degree of association with plasma proteins, dose adjustment is not required. However, in severe impaired liver function (in patients with porcaval anastomosis), a dose reduction may be required.

Elderly age: There is no need to adjust the dose in elderly patients.

Children: experience with the drug Betaloc in children is limited.

Betaloc is well tolerated by patients and the side effects are mostly mild and reversible.

As a result of clinical studies or when using the drug Betaloc (metoprolol tartrate), the following undesirable side effects have been described in clinical practice. In many cases, a causal relationship with treatment with the drug Betaloc has not been established.

The following criteria were used to assess the incidence of cases:

Patients taking β-blockers, should not be administered intravenous blockers of "slow" calcium channels such as Verapamil. Patients suffering from bronchial asthma or obstructive pulmonary disease should be prescribed concomitant bronchodilatory therapy. If necessary, you should increase the dose of β2-adrenomimetika. When using β1-adrenergic blockers, the risk of their influence on carbohydrate metabolism or the possibility of masking hypoglycemia is much less than when using non-selective β-adrenergic blockers.

In patients with chronic heart failure in the stage of decompensation, it is necessary to achieve a stage of compensation both before and during treatment with the drug.

Non-selective β-blockers are not recommended for patients suffering from Prinzmetal angina pectoris.

Very rarely, in patients with impaired atrioventricular conduction, deterioration may occur (a possible outcome is atrioventricular blockade). If bradycarlia has developed during treatment, the dose of Betaloc should be reduced. Metoprolol may worsen the symptoms of impaired peripheral arterial circulation due to a decrease in blood pressure. Caution should be exercised in the appointment of the drug to patients suffering from severe renal failure, with metabolic acidosis, co-administration with cardiac glycosides. In patients taking β-blockers, anaphylactic shock occurs in a more severe form. Patients suffering from pheochromocytoma, in parallel with the drug Betaloc should be prescribed alpha alrenoblocker. In the case of surgery, the anesthesiologist should be informed that the patient is taking a β-blocker. It is not necessary to prescribe a second dose - the second or third one with a heart rate of less than 40 beats per minute, a PQ interval of more than 0.26 seconds and a systolic blood pressure of less than 90 mm Hg.

Avoid co-administration of the drug Betalok® with the following drugs:

Barbituric acid derivatives: barbiturates (the study was conducted with phenobarbital) slightly increase the metabolism of metoprolol, due to the induction of enzymes.

Propafenone: when prescribing propafenone to four patients treated with metoprolol, an increase in plasma concentration of metoprolol by 2-5 times is noted. at the same time, two patients had side effects characteristic of metoprolol. This interaction was confirmed during the study on 8 volunteers. Probably, the interaction is due to the inhibition by propafenone, like quinidium, of the metabolism of metoprolol through the cytochrome P4502D6 system. Taking into account the fact that propafenone has the properties of β-blocker, the joint appointment of metoprolol and propafenone does not seem appropriate.

Verapamil: the combination of β-adrenergic blockers (atenolol, propranolol and pindolol) and verapamil can cause bradycardia and lead to a decrease in blood pressure. Verapamil and β-adrenergic blockers have a complementary inhibitory effect on atrio-ventricular conductivity and sinus node function.

The combination of the drug Betaloc with the following drugs in which you may need a dose adjustment:

Antiarrhythmic drugs of class I: Class I antiarrhythmic drugs and β-blockers can lead to the summation of a negative inotropic effect, which can lead to serious hemodynamic side effects in patients with impaired left ventricular function. Similar combinations should also be avoided in patients with sick sinus syndrome and impaired atrioventricular conduction.The interaction is described on the example of disopyramide.

Amiodarone: The combined use of Amiodarone and metoprolol can lead to severe sinus bradycardia. Given the extremely long half-life of amiodarone (50 days), possible interactions should be taken into account a long time after the cancellation of amiodarone.

Nonsteroidal anti-inflammatory drugs (NSAIDs): NSAIDs weaken the antihypertensive effect of β-blockers. This interaction is most documented for Indomethacin. The observed interaction for sulindac was not observed. In studies with Diclofenac, the described reaction was not noted.

Epinephrine (adrenaline): 10 cases of severe hypertension and bradycardia have been reported in patients taking non-selective β-blockers (including pindolol and proprapolol) and receiving epinephrine (adrenaline). Interaction is also noted in the group of healthy volunteers. It is assumed that such reactions can be observed with the use of epinephrine in conjunction with local anesthetics in case of accidental contact with the vascular bed. It is assumed that this risk is much lower when using cardioselective β-blockers.

Quinidine: Quinidne inhibits the metabolism of metoprolol in a special group of patients with rapid hydroxylation (in Sweden about 90% of the population), causing, mainly, a significant increase in the plasma concentration of metoprolol and increased β-blockade. It is believed that this interaction is also characteristic of other β-blockers in the metabolism of which cytochrome P4502D6 is involved.

Clonidine: Hypertensive reactions with abrupt cancellation of clonidine may be enhanced when co-taking β-blockers. When used together, in the event of clonidine withdrawal. Discontinuation of β-blockers should be started a few days before clonidine is withdrawn.

Plasma concentrations of metoprolol may be increased when used in combination with cymegidine, hydratazip, selective serotonin inhibitors such as paroxetine, Fluoxetine and serratin. Patients simultaneously taking metoprolol and other β-blockers (eye drops) or monoamine oxidase inhibitors (MAO) should be closely monitored.While taking β-adrenergic blockers, inhalation anesthetics enhance the cardiodepressive effect. When β-adrenergic blockers are taken, patients receiving oral hypoglycemic agents may need a dose adjustment of the latter. Cardiac glycosides when combined with β-adrenergic blockers can increase the time of atrioventricular conduction and cause bradycardia.

Treatment: the appointment of Activated carbon, if necessary, gastric lavage. IMPORTANT! Atropine (0.25–0.5 mg i.v. for adults, 10–20 mcg / kg for children) should be prescribed before gastric lavage (due to the risk of stimulating the vagus nerve). If necessary, maintaining the airway (intubation) and adequate ventilation of the lungs. Replenishment of circulating blood and glucose infusion. ECG monitoring. Atropine 1.0-2.0 mg IV, if necessary, repeat the introduction (especially in the case of vagal symptoms). In case of (suppression) of myocardial depression, infusion of dobutamine or dopamia is indicated. Glucagon 50-150 µg / kg i.v. can also be used at 1-minute intervals. In some cases, adding adrenaline to therapy may be effective. With arrhythmias and an increase in the ventricular complex (QRS), sodium solutions (chloride or bicarbonate) are injected with infusion. Installation of an artificial pacemaker is possible. When a cardiac arrest due to an overdose, resuscitation may be necessary for several hours. Terbutaline can be used to relieve bronchospasm (injection or by inhalation). Symptomatic treatment is carried out.

In the dark place at a temperature below 25 ° C.