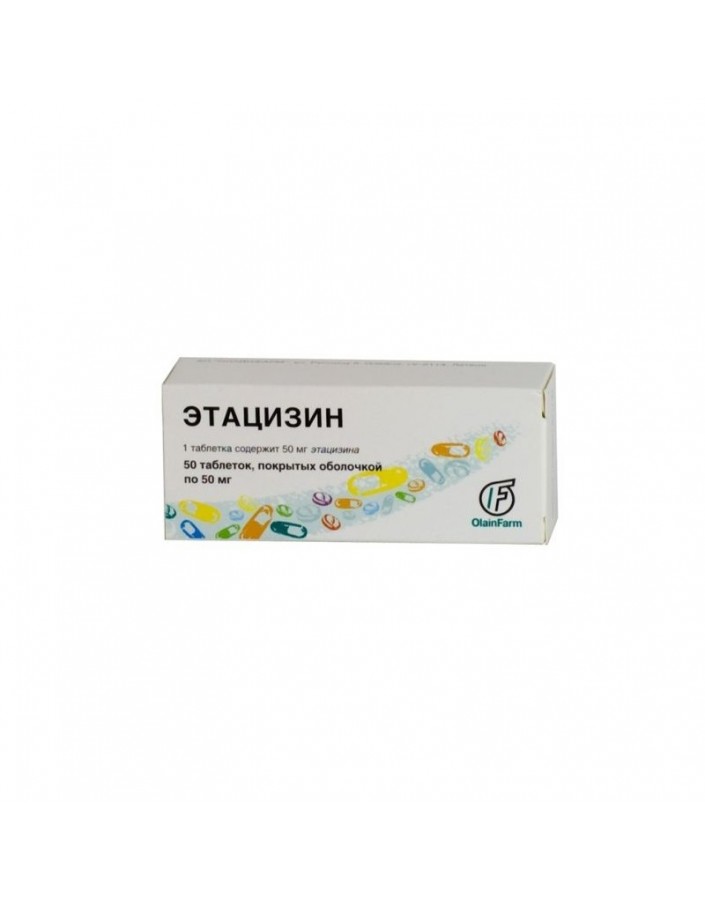 in the package of blister strip 10 pcs.; in a carton pack 5 packs.

Etacizin has an antiarrhythmic effect.

paroxysms of atrial fibrillation and flutter;

ventricular and supraventricular tachycardia, incl. and in Wolf-Parkinson-White syndrome (WPW).

Indications for use are limited to the presence of severe organic heart disease.

pronounced conduction disorders (including sinoatrial block, AV block II and III degree in the absence of an artificial pacemaker, violation of intraventricular conduction);

the presence of postinfarction cardiosclerosis;

severe disorders of the liver and / or kidneys;

children's age (up to 18 years) - efficiency and safety have not been established;

any form of cardiac arrhythmia in conjunction with blockades of the His-Purkinje system.

From the side of the cardiovascular system: stop of the sinus node, AV block, violation of intraventricular conduction, reduction of myocardial contractility, reduction of coronary blood flow, arrhythmia development of heart failure).

Changes on an ECG: lengthening of an interval of PQ, expansion of a tooth P and the QRS complex.

From the side of the central nervous system: dizziness, headache, staggering when walking or turning the head, slight drowsiness; in some cases - diplopia, accommodation paresis.

On the part of the digestive tract: nausea.

Perhaps a decrease in side effects or their disappearance after the use of Etacizin for 3-4 days. With long-term treatment with Etacizin, they do not increase, and with the discontinuation of the drug, they quickly disappear. Side effects depend on the size of the dose and, to avoid them, you should not prescribe the maximum dose of the drug.

The drug should be stored out of reach of children at a temperature not exceeding 20 ° C.