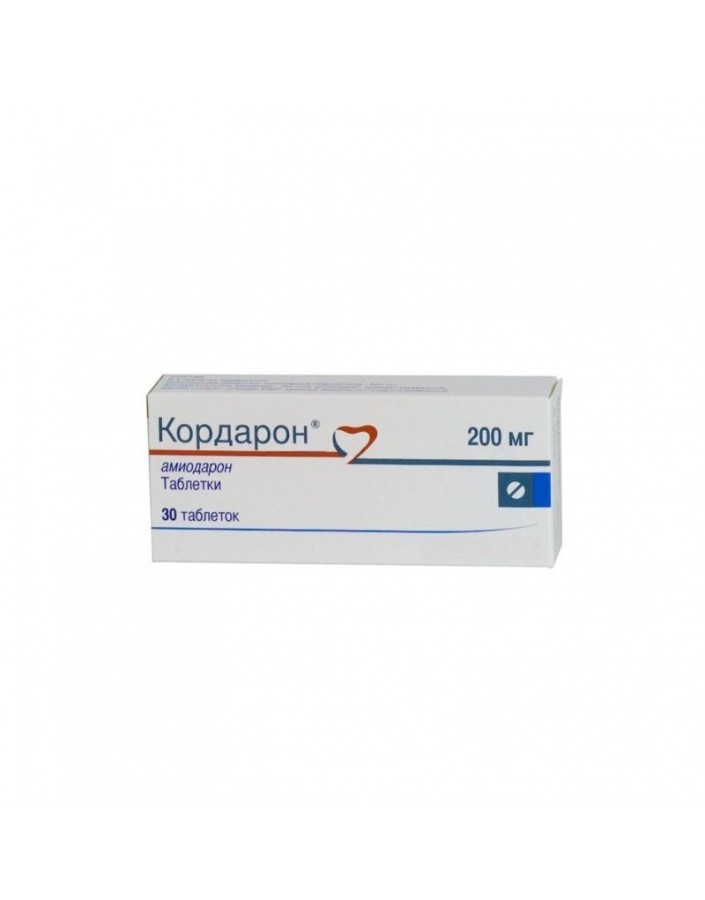 Antiarrhythmic drug class III. It has antiarrhythmic and antianginal effects.
The antiarrhythmic effect is due to an increase in the 3 phase action potential, mainly due to a decrease in the current of potassium through the channels of the cell membranes of the cardiomyocytes, and a decrease in the automatism of the sinus node (which leads to bradycardia not responding to atropine). The drug noncompetitively blocks a- and b-adrenoreceptors. Inhibits sinoatrial, atrial, and nodal conduction without affecting intraventricular conduction. Cordarone increases the refractory period and reduces the excitability of the myocardium. Slows the initiation and prolongs the refractory period of additional atrioventricular pathways.
The antianginal effect of Cordaron is due to a decrease in oxygen consumption by the myocardium (due to a decrease in heart rate and a decrease in OPSS), noncompetitive inhibition of a- and b-adrenoreceptors, an increase in coronary blood flow by directly affecting the smooth muscle of the arteries, maintaining cardiac output by reducing aortic pressure and reducing peripheral resistance.
Cordarone has no significant negative inotropic effect.
Therapeutic effects are observed after 1 week (from several days to 2 weeks) after starting the drug.

Suction
After oral administration, Amiodarone is slowly absorbed from the gastrointestinal tract. Bioavailability is 30-80%. After a single dose of Cmax in blood plasma is achieved in 3-7 hours
Distribution
Amiodarone has a large Vd. In the first days of administration, amiodarone accumulates in almost all tissues, especially in fatty inclusions, liver, spleen, and lungs. A few days later marked excretion of amiodarone from the body. Css is achieved in the range from 1 to several months, depending on the individual characteristics of the patient.
Removal
Amiodarone is excreted with bile and feces. Renal excretion is negligible. T1/2 amiodarone is 25-110 days.
After discontinuation, removal of amiodarone from the body continues for several months.

makes 600-1000 mg / days (to 1200 mg in the conditions of a hospital) within 8-10 days, under control of an ECG.
Maintenance dose makes 100-400 mg / days. The drug at a dose of 200 mg / day can be administered every other day, at a dose of 100 mg / day - daily. There may be breaks in taking the drug 2 days a week.
Intravenous infusion
- initial dose: usually 5-7 mg / kg in 250 ml of 5% glucose solution, during the period from 30-60 minutes to 2 hours; administration can be repeated 2-3 times within 24 hours. The rate of infusion should be adjusted according to the results.
The therapeutic effect of the drug is manifested during the first minutes of administration and disappears gradually, so it is necessary to establish a binding infusion.
- maintenance treatment: 10-20 mg / kg / day (on average 600-800 mg / day to 1200 mg / day) in 250 ml of glucose solution for several days. From the first day of infusion it is necessary to begin a gradual transition to oral intake.

Cardiovascular: bradycardia (degree depends on the dose); in rare cases, the sinus node is stopped (usually with sinus node dysfunction or in elderly patients); rarely - sinoatrial block, AV block. There are reports of the development or progression of arrhythmias (up to cardiac arrest).
Special senses: the deposition of lipofuscin in the corneal epithelium (in this case, patients usually have no subjective complaints); in rare cases, if the deposits are significant and partially fill the pupil, there are complaints about the appearance of colored halos or blurred outlines.There are reports of the development of neuropathy or neuritis of the optic nerve (a reliable connection with the reception of Cordaron has not been established).
Dermatologic: photosensitivity (with the simultaneous use of radiation therapy is manifested in the form of erythema); lead-blue or bluish pigmentation of the skin (with long-term use, after cessation of treatment it slowly disappears); skin rash, incl. exfoliative dermatitis (a significant relationship with the drug is not installed); rarely - alopecia.
On the part of the endocrine system: increase in T level4 with normal or slightly reduced T3 (in the absence of clinical signs of thyroid dysfunction, treatment should not be stopped). With prolonged use in rare cases, hypothyroidism may develop, much less often - hyperthyroidism.
Nervous system: rarely - neuropathy, myopathy (reversible after discontinuation of the drug), extrapyramidal tremor, cerebellar ataxia; in rare cases, benign intracranial hypertension, nightmares.
Gastrointestinal: rarely - nausea, vomiting, taste disturbance, liver dysfunction, increased activity of hepatic transaminases, pseudoalcoholic hepatitis, cirrhosis.
Respiratory: described cases of the development of alveolar and / or interstitial pneumonitis; fibrosis, pleurisy, bronchiolitis obliterans, pneumonia (fatal), bronchospasm (especially in patients with severe respiratory failure or bronchial asthma).
Other: rarely - vasculitis, renal dysfunction, thrombocytopenia; in isolated cases - epididymitis, impotence (no significant connection with the use of the drug has been established), hemolytic or aplastic anemia.
With the on / in the introduction of possible sensation of heat, increased sweating, bronchospasm, apnea (in patients with severe respiratory failure), increased intracranial pressure; Local - phlebitis.

- sinus bradycardia;
- SSSU (in cases of absence of a pacemaker);
- sinoatrial block;
- severe conduction disorders (in cases of absence of a pacemaker);
- dysfunction of the thyroid gland;
- simultaneous use with drugs that can cause ventricular tachycardia of the "pirouette" type (antiarrhythmic drugs, including bepridil, class IA drugs, sotalol, and also vincamine, sultopride, Erythromycin for IV administration, pentamidine for parenteral administration);
- pregnancy;
- lactation (breastfeeding);
- Hypersensitivity to amiodarone and Iodine.

In pregnancy, Cordarone is prescribed only for health reasons, because the drug has an effect on the thyroid gland of the fetus.
Amiodarone is excreted in breast milk in significant quantities, so the drug is contraindicated for use during lactation.

With caution, Cordarone is prescribed for electrolyte imbalance, asthere are separate reports of the development or progression of arrhythmias (up to cardiac arrest). However, at present it is not possible to differentiate changes associated with taking the drug, and changes associated with existing heart disease or resulting from insufficient treatment efficacy.
It should be borne in mind that when using Cordaron, ECG changes are possible: prolongation of the QT interval with the possible appearance of a U wave.
Note that in elderly patients there is a more pronounced decrease in heart rate.
With the appearance of AV block II or III degree, sinoatrial or bifacial blockade, treatment with Cordaron should be stopped.
It should also be borne in mind that after drug withdrawal, the pharmacodynamic effect lasts for 10-30 days.
Cordarone contains iodine (200 mg of iodine is contained in 200 mg), therefore it can influence the results of tests of accumulation of radioactive iodine in the thyroid gland. Therefore, before starting treatment, during its implementation and for several months after the end of treatment, it is necessary to conduct studies of the function of the thyroid gland.
In the course of treatment, an ophthalmologic examination should be carried out, liver function should be monitored, and also x-ray examination of the lungs should be carried out. In order to avoid the development of photosensitization, patients should avoid exposure to the sun or use effective protective measures.
It should be borne in mind that there have been rare cases of the development of acute respiratory distress syndrome in adults immediately after surgical interventions. Therefore, before the operation, the anesthesiologist should be informed that the patient is taking Cordarone.
Influence on ability to drive motor transport and control mechanisms
Currently, there is no evidence that Cordaron affects the ability to drive vehicles and control mechanisms.

The drug should be stored in a dark place at room temperature (not above 25 ° C).