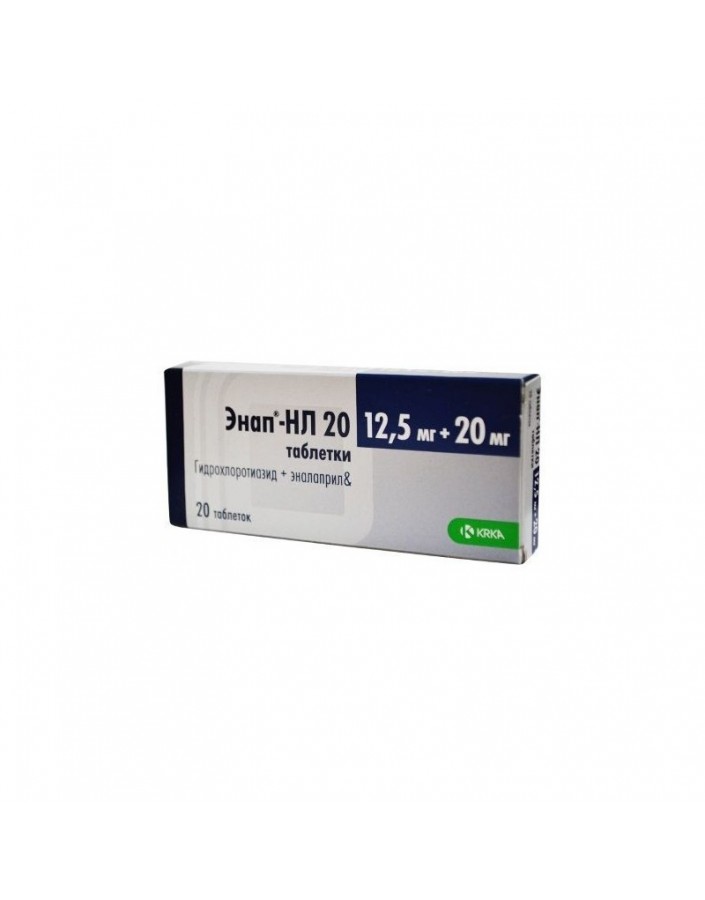 - arterial hypertension (in patients for whom combination therapy is indicated).

Drug Enap ®-NL 20 should be taken regularly at the same time, preferably in the morning, during or after a meal, without chewing, with a small amount of liquid.

The recommended dose is 1 tab. / Day. If necessary, the dose can be increased to 2 tab., Taken 1 time / day, which is the maximum daily dose.

In patients on diuretic therapy, it is recommended to cancel treatment or reduce the dose of diuretics at least 3 days before the start of treatment with Enap®-NL 20 to prevent the development of symptomatic hypotension.

The duration of treatment is determined by the doctor individually.

In patients with renal failure (CC 30-75 ml / min) Enap therapy®-NL 20 must begin with the appropriate doses of each active substance separately, according to the doses in the combined preparation Enap®-NL 20.

From the senses: infrequently - tinnitus.

From the urinary system: infrequently - impaired renal function, acute renal failure; rarely - an increase in the concentration of urea and creatinine in the serum.

Other: a symptom complex has been described, which may include fever, myalgia and arthralgia, serositis, vasculitis, increased ESR, leukocytosis and eosinophilia, skin rash, a positive test for antinuclear antibodies.

- angioedema in history, associated with the use of previously ACE inhibitors;

- children's and teenage age up to 18 years (efficiency and safety are not established);

- hypersensitivity to the drug components or sulfonamide derivatives.

Drug Enap®-NL 20 is contraindicated during pregnancy.

The effect of ACE inhibitors on the fetus in the first trimester of pregnancy has not been established. The use of ACE inhibitors in the II and III trimesters of pregnancy was accompanied by a negative effect on the fetus and newborn. Newborns developed arterial hypotension, renal failure, hyperkalemia and / or hypoplasia of the skull bones. Perhaps the development of oligohydramnios, apparently due to impaired renal function of the fetus. This can lead to contracture of the limbs, deformation of the bones of the skull, including its facial part, and lung hypoplasia.

The use of diuretics during pregnancy is not recommended, as it can cause fetal and newborn jaundice, thrombocytopenia, and possibly other undesirable reactions observed in adults.

To use the drug with caution in severe violations of the liver.

Contraindications: children and adolescents under 18 years of age (efficacy and safety have not been established.

Hypotension with all the clinical consequences can be observed after the first dose of Enap tablets®-NL 20 in patients with severe heart failure and hyponatremia, severe renal insufficiency or left ventricular dysfunction, and in particular in patients with reduced BCC, as a result of diuretic therapy, salt-free diet, diarrhea, vomiting or hemodialysis.

Hypotension that occurred after taking the first dose is not a contraindication for further treatment.

Care must be taken in patients with coronary artery disease, severe cerebrovascular disease, aortic stenosis or idiopathic hypertrophic subaortic stenosis, which prevents the outflow of blood from the left ventricle, severe atherosclerosis, in elderly patients due to the risk of arterial hypotension and deterioration of the heart, brain, and kidneys.

Disorders of water and electrolyte balance

Drug Enap®-NL 20 in patients with renal insufficiency (CK 30-75 ml / min) should be used only after preliminary titration of the doses of Enalapril and hydrochlorothiazide separately, according to the doses in the combined preparation Enap®-NL 20.

Drug Enap®-NL 20 should be used with caution in patients with liver failure or progressive liver disease, because hydrochlorothiazide can cause hepatic coma even with minimal disruption of water and electrolyte balance. It was reported on several cases of acute liver failure with cholestatic jaundice, fulminant necrosis of the liver and fatal outcome (rarely) during treatment with ACE inhibitors. If jaundice occurs and liver transaminases increase, Enap treatment®-NL 20 should be discontinued immediately, patients should be monitored.

Caution is necessary in all patients receiving treatment with hypoglycemic agents for oral administration or insulin, becausehydrochlorothiazide can weaken, and enalapril strengthen their action.

Thiazide diuretics can reduce Calcium excretion by the kidneys and cause a slight and transient increase in serum calcium levels.

Severe hypercalcemia can be a sign of latent hyperparathyroidism. Before conducting a study of the function of the parathyroid glands, the thiazide diuretics should be canceled.

During treatment with thiazide diuretics, serum levels of cholesterol and triglycerides may increase.

Thiazide diuretic therapy in some patients may exacerbate hyperuricemia and / or aggravate the course of gout. However, enalapril increases the excretion of uric acid by the kidneys, thereby counteracting the hyperuricemic effect of hydrochlorothiazide.

When an angioedema of the face occurs, it is usually sufficient to discontinue the therapy and prescribe an antihistamine to the patient.

Patients with a history of angioedema, not associated with ACE inhibitors, have an increased risk of developing angioedema when taking any ACE inhibitor.

In patients taking thiazide diuretics, hypersensitivity reactions may develop with or without allergic reactions. A worsening course of systemic lupus erythematosus has been reported.

Due to the increased risk of Anaphylactic reactions, Enap should not be prescribed.®-NL to 20 patients on hemodialysis using high-flow polyacrylonitrile membranes (AN 69®) undergoing low density lipoprotein apheresis with dextran sulfate and immediately prior to desensitization to wasp or bee venom.

Before surgery (including dentistry), an anesthesiologist should be warned about the use of ACE inhibitors.

During surgical interventions or general anesthesia with the use of agents that cause arterial hypotension, ACE inhibitors can block the formation of angiotensin II in response to compensatory renin release. If this develops a pronounced decrease in blood pressure, explained by a similar mechanism, it can be adjusted by increasing the BCC.

At the beginning of treatment with Enap®-NL 20 can cause pronounced decrease in blood pressure, dizziness and drowsiness, which can reduce the ability to drive motor vehicles, therefore at the beginning of treatment it is not recommended to drive motor vehicles and engage in other potentially dangerous activities requiring increased concentration and psychomotor reactions.

Treatment: gastric lavage and ingestion of Activated carbon; in more serious cases, transfer the patient to a horizontal position with raised legs, then carry out measures aimed at stabilizing blood pressure - in / in the introduction of plasma substitutes, infusion of a 0.9% sodium chloride solution. The patient should monitor blood pressure, heart rate, respiratory rate, serum concentration of urea, creatinine, electrolytes and diuresis, if necessary, in / in the introduction of angiotensin II, hemodialysis (enalaprilat excretion rate - 62 ml / min).

The use of potassium supplements, potassium-sparing agents or potassium-containing salt substitutes, especially in patients with renal insufficiency, can lead to a significant increase in serum potassium. The loss of potassium during the administration of thiazide diuretics, as a rule, is reduced by the action of enalapril. The content of potassium in the serum usually remains within the normal range.

With simultaneous use with lithium preparations, there is a slowdown in lithium elimination (increased cardiotoxic and neurotoxic effects of lithium).

Thiazide diuretics may enhance the effect of tubocurarine chloride.

The simultaneous use of thiazide diuretics, opioid analgesics or phenothiazine derivatives can lead to orthostatic hypotension.

Combined with enalapril, the use of beta-blockers, alpha-blockers, ganglion-blocking agents, methyldopa or blockers of slow calcium channels can further reduce blood pressure.

The simultaneous use of Allopurinol, cytostatics and immunosuppressants with ACE inhibitors may increase the risk of leukopenia.

Simultaneous administration of thiazide diuretics with GCS and calcitonin can lead to the development of hypokalemia.

Simultaneous use of cyclosporine with ACE inhibitors may increase the risk of hyperkalemia.

The simultaneous use of NSAIDs (including selective COX-2 inhibitors) can weaken the antihypertensive effect of ACE inhibitors.

NSAIDs and ACE inhibitors have an additive effect on the increase in serum potassium, which can lead to a deterioration in renal function, especially in patients with impaired renal function. This effect is reversible.

NSAIDs can reduce the diuretic and antihypertensive effects of diuretics.

Antacids can reduce the bioavailability of ACE inhibitors.

Sympathomimetics can reduce the antihypertensive effect of ACE inhibitors.

Thiazide diuretics can reduce the action of adrenermimetics (epinephrine).

Ethanol enhances the hypotensive effect of ACE inhibitors and thiazide diuretics, which can cause orthostatic hypotension.

Epidemiological studies suggest that the simultaneous use of ACE inhibitors and hypoglycemic agents can lead to hypoglycemia. More often, hypoglycemia develops in the first weeks of therapy in patients with impaired renal function. Long-term and controlled clinical studies of enalapril do not confirm these data and do not limit the use of enalapril in patients with diabetes mellitus. However, such patients should be under regular medical supervision.

The use of hypoglycemic agents for oral administration and insulin with thiazide diuretics may require the correction of their doses.

A single dose of colestyramine or colestipol reduces the absorption of hydrochlorothiazide in the GI tract by 85% and 43%, respectively.

With simultaneous use of ACE inhibitors and gold preparations (sodium aurothiomalate) IV, a symptom complex has been described, including facial flushing, nausea, vomiting, and arterial hypotension.