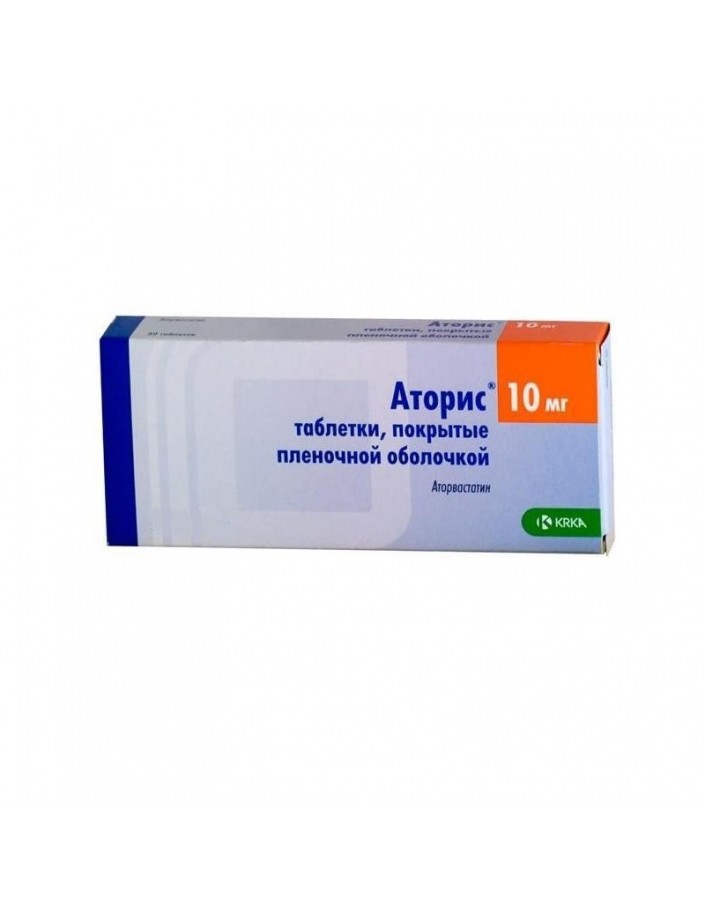 Lipid-lowering drug from the group of statins.

The main mechanism of action of Atorvastatin is the inhibition of the activity of HMG-CoA reductase, an enzyme catalyzing the conversion of HMG-CoA to mevalonic acid. This transformation is one of the early stages in the chain of cholesterol synthesis (Xc) in the body. Suppression of Xc synthesis leads to increased reactivity of LDL receptors in the liver and extrahepatic tissues. These receptors bind the LDL particles and remove them from the blood plasma, which leads to a decrease in the level of Xc-LDL in the blood.

The effect of Atoris develops 2 weeks after the start of the drug, the maximum effect is achieved after 4 weeks.

After ingestion is well absorbed from the gastrointestinal tract (80%). Time to reach Cmax is 1-2 hours

Due to intensive metabolism during the "first pass" through the liver, atorvastatin bioavailability is 12%.

Medium Vd - 381 l, binding to plasma proteins - 98%. Atorvastatin does not penetrate the BBB.

It is metabolized mainly in the liver under the action of cytochrome P450 3A4 with the formation of pharmacologically active metabolites (ortho and parahydroxylated derivatives, beta-oxidation products). These active metabolites account for approximately 70% of the inhibitory activity against HMG-CoA reductase, which persists for 20-30 hours.

It is mainly excreted in the bile (it does not undergo a pronounced enterohepatic recirculation). T1/2 - 14 hours. About 46% is excreted in the feces, less than 2% - in the urine.

Cmax in patients with alcoholic cirrhosis of the liver is 16 times higher than normal.

- to reduce serum levels of total Xc, Xc-LDL, apolipoprotein B and triglycerides in patients with primary hyperlipidemia (types IIa and IIb by Fredrickson), familial heterozygous hypercholesterolemia and mixed hyperlipidemia;

- to reduce elevated levels of total Xc, Xc-LDL and apolipoprotein B in blood plasma in patients with homozygous familial hypercholesterolemia.

Atorvastatin increases serum levels of Xc-HDL and decreases the ratios of Xc-LDL / Xc-HDL and total Xc / Xc-HDL.The drug is prescribed with insufficient efficacy of diet therapy and other non-pharmacological treatment methods.

Prior to the initiation of treatment by Atoris, the patient should be transferred to a lipid-lowering diet, which must be followed during drug therapy.

The drug is taken orally, regardless of the meal.

The recommended starting dose is 10 mg daily. The dose of the drug varies from 10 mg to 80 mg 1 time / day, selected based on the initial level of LDL-C, the goal of therapy and individual therapeutic effect. The drug can be taken in another registered dosage (in the form of film-coated tablets, 40 mg). Atoris® take once at any time of the day, but at the same time every day.

Therapeutic effect of Atoris is noted after 2 weeks of taking the drug, the maximum effect is achieved after 4 weeks. Therefore, the dose should not be changed earlier than 4 weeks after starting the drug.

At the beginning of therapy and / or during the dose increase, it is necessary to control the content of plasma lipids every 2–4 weeks and adjust the dose accordingly.

Atprimary (heterozygous hereditary and polygenic) hypercholesterolemia (type IIa) and mixed hyperlipidemia (type IIb) Treatment begins with the recommended initial dose, which is increased after 4 weeks, depending on the response of the patient. The maximum daily dose is 80 mg.

Athomozygous hereditary hypercholesterolemiaThe initial dose is adjusted individually depending on the severity of the disease.In most patients, the optimal effect was observed when using the drug in a daily dose of 80 mg (1 time / day). Atoris® used as an additional therapy to other methods of treatment (plasmapheresis) or as the main method of treatment, if therapy by other methods is impossible.

Forelderly patients and patients with impaired renal function dose adjustment is not required.

does not affect the level of atorvastatin in the blood plasma or the degree of decrease in the content of Xc-LDL when using atorvastatin, therefore, changing the dose of the drug is not required.

the drug is prescribed with caution in connection with the slowing down of the drug from the body. In this situation, control of clinical and laboratory parameters is shown, and if significant pathological changes are detected, the dose should be reduced or treatment should be discontinued.

On the part of the respiratory system: bronchitis, rhinitis, dyspnea, bronchial asthma, epistaxis.

- cirrhosis of the liver of various etiologies;

- age up to 18 years (efficacy and safety of use has not been established);

The drug is not prescribed to women of reproductive age who do not use adequate methods of contraception.

The drug contains lactose, therefore it is not recommended for patients with galactosemia or syndrome of impaired glucose / galactose absorption, lactase deficiency.

WITHcaution It should appoint a drug for alcoholism, liver disease in history.

Atorvastatin is contraindicated for use in pregnant and nursing mothers.

If necessary, the appointment of Atoris should decide on the termination of breastfeeding.

The drug is contraindicated in liver diseases in the active stage (including active chronic hepatitis, chronic alcoholic hepatitis); liver failure; in case of liver cirrhosis of various etiologies; with increased activity of hepatic transaminases of unknown origin

does not affect the level of atorvastatin in the blood plasma or the degree of decrease in the content of Xc-LDL when using atorvastatin, therefore, changing the dose of the drug is not required.

Before starting treatment with Atoris, the patient should be prescribed a standard cholesterol-lowering diet, which he must follow during the entire period of treatment.

When using Atoris, there may be an increase in liver transaminase activity.This increase is usually small and has no clinical significance. However, it is necessary to regularly monitor indicators of liver function before starting treatment, after 6 weeks and 12 weeks after starting the use of the drug and after increasing the dose. Treatment should be discontinued with an increase in AST and ALT more than 3 times relative to VGN.

Atorvastatin can cause an increase in the activity of CPK and aminotransferases.

Patients should be warned that they should immediately consult a doctor if they develop unexplained pain or muscle weakness. Especially if these symptoms are accompanied by malaise and fever.

When treating Atoris, myopathy may develop, sometimes accompanied by rhabdomyolysis, leading to acute renal failure . The risk of this complication increases when one or more of the following drugs are taken with Atoris at the same time: fibrates, nicotinic acid, cyclosporine, nefazodone, some antibiotics, antifungals from the group of azoles, HIV protease inhibitors. In clinical manifestations of myopathy, it is recommended to determine plasma concentrations of CPK. With a 10-fold increase in VGN of CPK activity, Atoris treatment should be discontinued.

There are reports of the development of atonic fasciitis on the background of the use of atorvastatin, however, the connection with the use of the drug is possible, but to date has not been proven, the etiology is not known.

No adverse effect of Atoris on the ability to drive motor vehicles and control mechanisms was reported.

Treatment: in case of overdose, the following general measures are necessary: ​​monitoring and maintaining vital functions, and preventing further absorption of the drug (gastric lavage, taking Activated carbon or laxatives). There is no specific antidote.

With the development of myopathy with subsequent rhabdomyolysis and acute renal failure (a rare but severe side effect), the drug should be immediately canceled, and the patient must enter a diuretic and sodium bicarbonate solution. If necessary, hemodialysis should be carried out.

Rhabdomyolysis can lead to hyperkalemia, which requires iv administration of calcium chloride or Calcium gluconate , infusion of glucose with insulin , the use of potassium ion exchangers or, in severe cases, hemodialysis.

Since atorvastatin is largely bound to plasma proteins, hemodialysis is a relatively inefficient way to remove this substance from the body.

With simultaneous use with Erythromycin CmaxAtorvastatin is increased by 40%.

With the joint use of antacids (suspension of hydroxides of magnesium and aluminum) reduce the content of atorvastatin in the blood plasma.

At the same time taking atorvastatin with colestipol, the concentration of atorvastatin in plasma decreases by 25%, but the therapeutic effect of the combination is higher than the effect of a single drug.

In patients simultaneously receiving atorvastatin at a dose of 80 mg and Digoxin , the content of digoxin in the plasma increases by about 20%. Patients receiving this combination should be under the supervision of a physician.

Simultaneous intake of atorvastatin with Warfarin may increase the effect of warfarin on blood coagulation rates in the first days (reduction of prothrombin time). This effect disappears after 15 days of taking these drugs at the same time.

The simultaneous use of atorvastatin with protease inhibitors is accompanied by an increase in plasma atorvastatin concentration.

Clinically significant interaction with cimetidine is not observed.

The use of grapefruit juice in the treatment of Atoris can lead to an increase in plasma atorvastatin concentrations. In this regard, patients taking Atoris®should avoid drinking this juice.

List B. The drug should be kept out of the reach of children at a temperature not exceeding 25 ° C. Shelf life - 2 years.