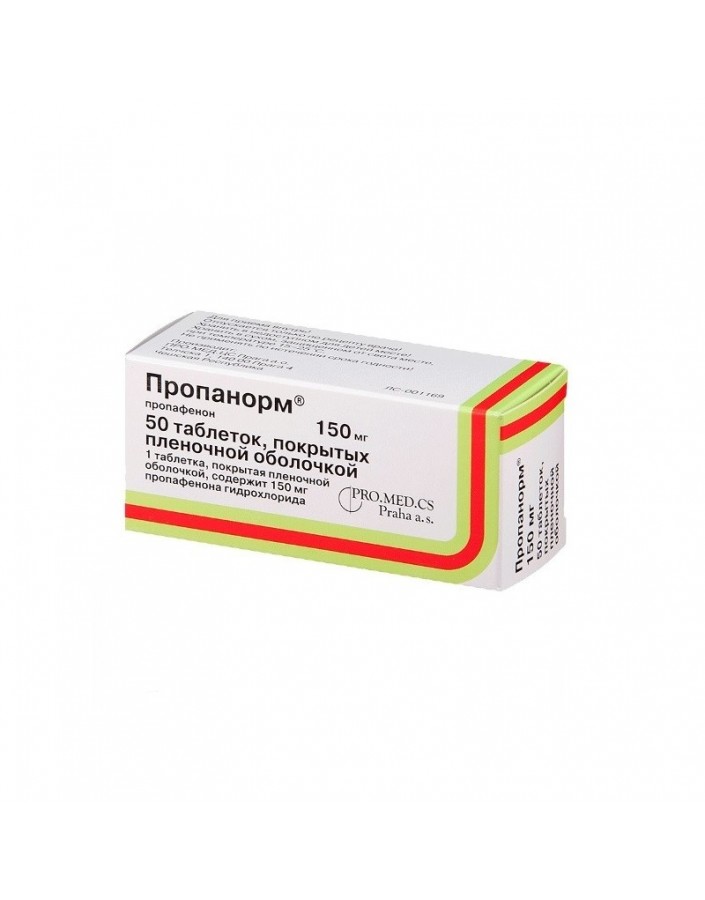 in a blister strip package 10 pcs.; in a carton pack 5 packs.

hypersensitivity to the drug;

cardiogenic shock (with the exception of arterial hypotension due to tachycardia and antiarrhythmic shock);

combination with other antiarrhythmic drugs similar in effect on cardiac electrophysiology;

electrolyte disturbances (must be necessarily corrected before the appointment of propafenone);

From the side of the central nervous system: headache, dizziness, rarely - blurred vision, diplopia, convulsions.

Other: weakness, bronchospasm, hemorrhagic rash on the skin.

Can not be combined with Lidocaine (enhanced cardiodepressive effect).

With simultaneous use with beta-blockers, tricyclic antidepressants may increase antiarrhythmic action, with local anesthetics - an increased risk of damage to the central nervous system.

Zimetidin and quinidine, slowing down the metabolism, increase the concentration of propafenone in plasma by 20%, rifampicin - reduces.

Drugs that inhibit SA and AV nodes and have a negative inotropic effect, increase the risk of side effects.

Intoxication can occur with a single dose of 2 times the daily; symptoms of intoxication appear after 1 h, maximum - after a few hours.

Treatment: gastric lavage, defibrillation, the introduction of dobutamine, diazepam; if necessary, artificial ventilation of the lungs and indirect heart massage. Hemodialysis is not effective.

Inside after meal. pills should be swallowed whole, washed down with a small amount of water.

The dosage regimen is set individually and adjusted by the doctor.

To relieve paroxysm of atrial fibrillation, a loading dose of 600 mg is used - once orally.

In patients older than 70 years, as well as in patients with a body weight less than 70 kg, smaller doses are used (the first dose is given in the hospital under the supervision of an ECG and blood pressure).

special instructions
Treatment should be under the control of electrolyte balance (especially potassium levels) and ECG. It is recommended to periodically determine the activity of transaminases, antinuclear antibodies. In patients with an implanted pacemaker, it is necessary to take into account an increase in the defibrillation threshold and pacing, which makes it necessary to correct the parameters of the pacemaker. When abnormal liver function (cumulation possible) is used in doses that make up 20-30% of the usual. Caution is prescribed to drivers of vehicles and persons engaged in activities requiring increased attention and speed of reaction.

Storage conditions
List B. In the dark place at a temperature of 15-25 ° C.