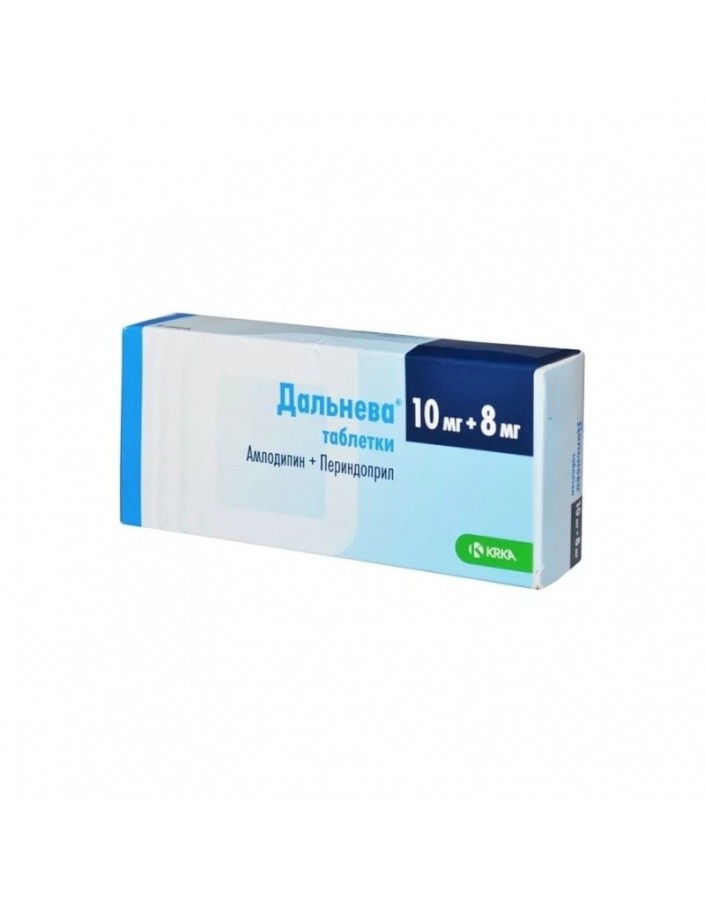 Increased sensitivity to perindopril or other ACE inhibitors;

- angioedema (angioedema) in history (including the background of taking other ACE inhibitors);

- hypersensitivity to amlodipine or other dihydropyridine derivatives;

- obstruction of the output tract of the left ventricle (for example, severe aortic stenosis);

Unstable angina (with the exception of Prinzmetal stenocardia);

Dalnev drug use® contraindicated in pregnancy.

Drug Dalneva® should not be used in the first trimester of pregnancy. When planning a pregnancy or when it occurs on the background of the use of the drug Dalneva®, it is necessary to stop taking the drug as soon as possible and prescribe another antihypertensive therapy approved for use during pregnancy. Appropriate controlled studies of the use of ACE inhibitors in pregnant women have not been conducted. The limited data available on the effects of the drug on the fetus in the first trimester of pregnancy indicate that the use of ACE inhibitors does not lead to fetal malformations, but an increase in risk cannot be excluded.

It is known that the effect of ACE inhibitors on the fetus in the second and third trimesters of pregnancy can lead to impaired development (reduced kidney function, oligohydramnios, slowing down the ossification of the skull bones) and the development of complications in the newborn (renal failure, arterial hypotension). If the patient received ACE inhibitors in the II or III trimester of pregnancy, it is recommended to conduct an ultrasound examination to assess the state of the bones of the skull and the kidney function of the fetus.

Newborns whose mothers received ACE inhibitors during pregnancy should be under close medical supervision due to the risk of arterial hypotension, oliguria and hyperkalemia.

Inside, one pill 1 time per day, preferably in the morning before a meal.

Dose of the drug Dalneva® It is selected after previous titration of doses of individual components of the drug: perindopril and amlodipine in patients with arterial hypertension and stable angina.

Drug Dalneva® can be used in patients with QA more than 60 ml / min.

Drug Dalneva® contraindicated for use in patients with QA less than 60 ml / min. Such patients are recommended individual selection of doses of perindopril and amlodipine. Changes in the concentration of amlodipine in the blood plasma do not correlate with the severity of renal failure.

Care must be taken when using the drug Dalneva® patients with liver failure, because there are no recommendations for the drug doses in these patients.

When using the drug Dalneva® elderly patients dose adjustment is not required.

Drug Dalneva® should not be assigned to children and adolescents under 18 years, because there are no data on the efficacy and safety of perindopril and amlodipine in these groups of patients both in monotherapy and as part of combination therapy.

In each group, undesirable effects are presented in order of decreasing severity.

From the circulatory and lymphatic systems:

often: a feeling of heartbeat, "flushes" of blood to the skin of the face, a pronounced decrease in blood pressure;

seldom: pain behind the sternum;

infrequently: dryness of the oral mucosa, a violation of taste perception, a change in the rhythm of defecation;

On the part of the skin:

From the musculoskeletal system:

frequency unknown: increase in the concentration of urea and creatinine in the serum.

Additional data on amlodipine: isolated cases of extrapyramidal syndrome have been reported with the use of slow Calcium channel blockers.

Data on overdose with perindopril is limited.

Treatment: emergency measures are reduced to the removal of the drug from the body: gastric lavage and / or the appointment of activated charcoal with the subsequent restoration of the BCC.

With a pronounced decrease in blood pressure, the patient should be placed in the "lying" position on the back with raised legs, and if necessary, measures should be taken to restore the BCC (for example, intravenous infusion with 0.9% sodium chloride solution). Intravenous catecholamine administration is also possible. With hemodialysis, perindopril can be removed from the systemic circulation. In bradycardia resistant to therapy, it may be necessary to install an artificial pacemaker. The dynamic control of the general state, the concentration of creatinine and electrolytes in the blood plasma is necessary.

Information on overdose with amlodipine is limited.

Symptoms: marked reduction in blood pressure with the possible development of reflex tachycardia and excessive peripheral vasodilation (the risk of severe and persistent arterial hypotension, including the development of shock and death).

Treatment: gastric lavage, the appointment of Activated carbon (especially in the first 2 hours after an overdose), maintaining the function of the cardiovascular system, the elevated position of the lower extremities, control of the BCC and diuresis, symptomatic and supportive therapy. To restore vascular tone - the use of vasoconstrictor agents (in the absence of contraindications to their use); to eliminate the effects of calcium channel blockade, intravenous administration of Calcium gluconate solution. Hemodialysis is ineffective.

Potassium-sparing diuretics, potassium preparations or potassium-containing food salt substitutes: although the serum potassium content is within the normal range, hypercaliemia may occur in some patients with perindopril. Potassium-sparing diuretics (for example, spironolactone, triamterene, or amiloride), potassium supplements, or potassium-containing salt substitutes can lead to a significant increase in plasma potassium levels, and therefore their use at the same time as ACE inhibitors is not recommended. If simultaneous therapy is necessary (in the case of confirmed hypokalemia), care should be taken to regularly monitor the potassium content in the blood plasma and ECG parameters.

Estramustin: simultaneous use is accompanied by an increased risk of developing angioedema.

Nonsteroidal anti-inflammatory drugs (NSAIDs), including inhibitors of cyclooxygenase-2 (COX-2), Acetylsalicylic acid in high doses (more than 3 g / day) and non-selective NSAIDs : the use of NSAIDs can lead to a decrease in the diuretic, natriuretic and hypotensive action of ACE inhibitors. The simultaneous use of ACE inhibitors and NSAIDs can lead to a deterioration in renal function, including the development of acute renal failure and an increase in serum potassium, especially in patients with reduced kidney function. Care should be taken when using this combination, especially in elderly patients. Patients in this case need to compensate for the loss of fluid to carefully monitor renal function, both at the beginning of treatment and during treatment.

Hypoglycemic drugs (hypoglycemic agents for oral administration and / or insulin): the use of ACE inhibitors may enhance the hypoglycemic effect of insulin or sulfonylurea derivatives in patients with diabetes.The development of episodes of hypoglycemia was noted very rarely (perhaps there is an increase in glucose tolerance, leading to a decrease in the need for insulin).

Diuretics (thiazide and "loopbacks"): in patients taking diuretics, especially with excessive removal of fluids and / or electrolytes, a significant decrease in blood pressure may be observed at the beginning of the use of ACE inhibitors. The risk of arterial hypotension can be reduced by discontinuing the diuretic, by increasing fluid and / or salt intake before starting therapy, starting therapy with low doses of perindopril with their further gradual increase.

Allopurinol, cytostatic and immunosuppressive agents, glucocorticosteroids (with systemic use) and procainamide: simultaneous use with ACE inhibitors may be accompanied by an increased risk of leukopenia.

Dantrolene (intravenous administration): in animal experiments after the introduction of Verapamil and dantrolen (intravenously), cases of fatal ventricular fibrillation and cardiovascular insufficiency associated with hyperkalemia were observed. Given the risk of developing hyperkalemia, the simultaneous use of blockers of “slow” calcium channels should be avoided, including and amlodipine and dantrolene.

Inductors CYP3A4 (rifampicin, Hypericum perforatum drugs, anticonvulsants, such as Carbamazepine, phenobarbital, phenytoin, phosphenytoin, primidone): the plasma concentration of amlodipine may decrease as a result of an increase in its metabolism in the liver. Caution should be exercised with the simultaneous use of amlodipine and microsomal oxidation inducers and, if necessary, adjust the dose of amlodipine.

Simultaneous use of beta-adrenergic blockers (bisoprolol, metoprolol) and Carvedilol alpha and beta-blockers used in chronic heart failure (CHF): increases the risk of arterial hypotension and worsening of CHF in patients with uncontrolled or latent CHF (intensification). In addition, beta-blockers can reduce excessive reflex cardiac sympathetic activation against the background of concomitant CHF.

There is no interaction of the following drugs with amlodipine:

- with simultaneous use of amlodipine and sildenafil, there is no marked increase in the hypotensive effect of each of the drugs;

Amlodipine does not affect the pharmacokinetics of the following drugs:

- atorvastatin: receiving repeated doses of amlodipine 10 mg in combination with atorvastatin at a dose of 80 mg does not lead to a significant change in the equilibrium pharmacokinetic parameters of atorvastatin;

- digoxin: simultaneous use of amlodipine and digoxin is not accompanied by a change in the concentration of digoxin in the blood serum and the renal clearance of digoxin in healthy volunteers;

- warfarin: in healthy male volunteers who took warfarin, the addition of amlodipine does not have a significant effect on the change in the index of prothrombin time due to warfarin;

- cyclosporine: amlodipine has no significant effect on the pharmacokinetic parameters of cyclosporine.

Antihypertensive drugs (for example, beta-blockers) and vasodilators: it is possible to enhance the hypotensive effect of perindopril and amlodipine.

Caution should be exercised when used with nitroglycerin, other nitrates or other vasodilators, since this may further decrease blood pressure.

Amifostine: can potentiate the hypotensive effect of amlodipine.

When using ACE inhibitors, including perindopril, in rare instances, angioedema of the face, lips, tongue, vocal folds, and / or larynx may develop. With the appearance of these symptoms, the use of the drug Dalneva® should be stopped immediately, the patient should be observed until the signs of edema disappear completely.

If angioedema affects only the face and lips, then its manifestations usually disappear on their own or antihistamines can be used to treat symptoms. Angioedema, accompanied by swelling of the tongue or larynx, can lead to airway obstruction and death.

If these symptoms appear, epinephrine (adrenaline) should be injected immediately subcutaneously at a dilution of 1: 1000 (0.3 or 0.5 ml) and / or ensure airway patency.The patient must be under medical supervision until the symptoms disappear completely and permanently.

In patients with a history of angioedema, not associated with the use of ACE inhibitors, the risk of its development can be increased during the use of drugs in this group.

In rare cases, the treatment with ACE inhibitors develops intestinal angioedema (angioedema). At the same time, patients have abdominal pain as an isolated symptom or in combination with nausea and vomiting, in some cases without prior angioedema of the face and at a normal level of C-1 esterase. The diagnosis is established using computed tomography of the abdominal cavity, ultrasound, or at the time of surgical intervention. Symptoms disappear after stopping the use of ACE inhibitors. In patients with abdominal pain, receiving ACE inhibitors, when conducting a differential diagnosis, it is necessary to consider the possibility of developing intestinal angioedema.