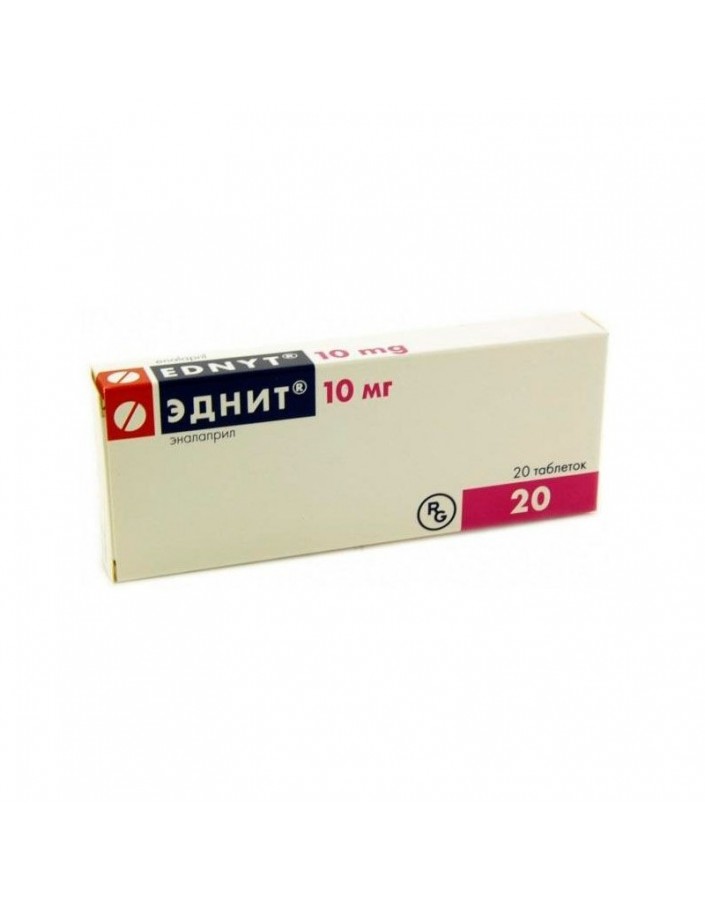 In 1 cell contour packaging 10 tablets. In a cardboard bundle 2 packs.

Ednit is an ACE inhibitor. Antihypertensive drug. Enalapril maleate is a prodrug: as a result of its hydrolysis, enalaprilat is formed, which inhibits ACE activity, thereby suppressing the formation of angiotensin II. The drug reduces the round neck, increases cardiac output, reduces the end-diastolic pressure in the left ventricle, reduces the pressure in the pulmonary veins and arteries, in the right atrium. With prolonged use, the drug reduces the severity of left ventricular myocardial hypertrophy, prevents the progression of heart failure and slows down the development of left ventricular dilatation. It has some diuretic effect. It lowers intraglomerular hypertension, slowing the development of glomerulosclerosis and the risk of renal failure.

- Arterial hypertension (including renovascular), both in the form of monotherapy, and in combination with other antihypertensive drugs.
- Chronic heart failure (as part of combination therapy).

Caution should be given to the drug for autoimmune diseases, abnormal liver function, loss of fluid and salt, bilateral renal artery stenosis or arterial stenosis of a single kidney, while taking it with immunosuppressants and diuretics.In the case of previous treatment with diuretics (for example, in patients with chronic heart failure), the risk of orthostatic hypotension increases, therefore, before starting treatment with Ednit, it is necessary to compensate for the loss of fluids and salts.
Before examining the function of the parathyroid glands, Ednith should be abolished. Patients taking Ednite should refrain from excessive drinking.

Symptoms: arterial hypotension.
Treatment: the patient should be given a horizontal position with raised legs. In mild cases, a saline solution is prescribed. In more severe cases - in / in the introduction of an isotonic solution of sodium chloride or plasma substitutes. Hemodialysis is possible.