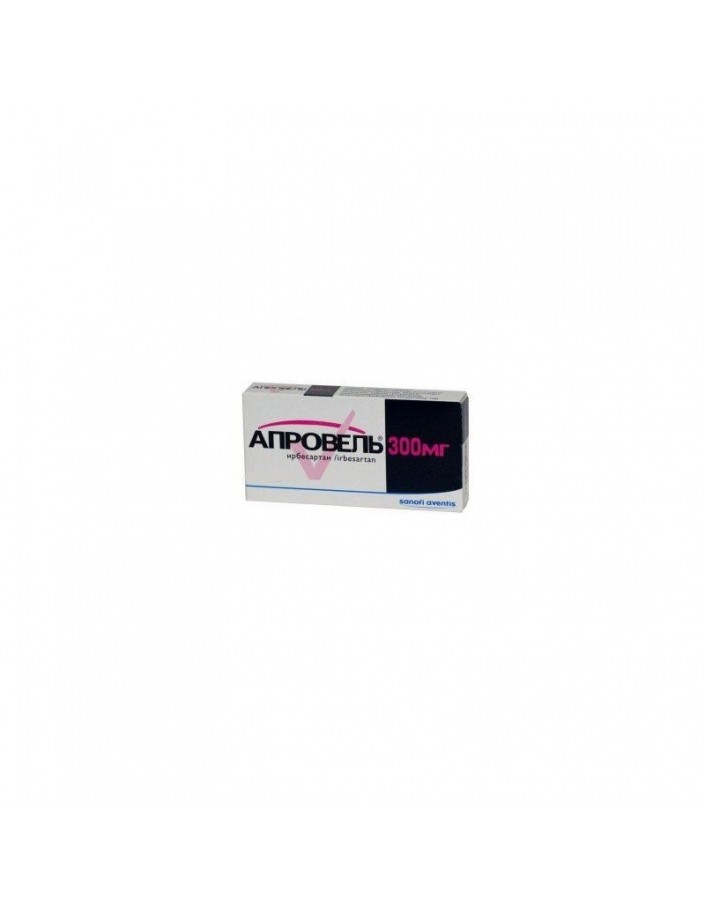 Antihypertensive drug, a specific angiotensin II receptor antagonist (type AT1). Eliminates the vasoconstrictor effect of angiotensin II and reduces the concentration of aldosterone in the blood plasma. Does not suppress kinase II - an enzyme that destroys bradykinin.
Reduces the round robin, reduces afterload. Reduces blood pressure (with a minimum change in heart rate) and pressure in the pulmonary circulation, with a decrease in blood pressure is dose-dependent.
The maximum effect of the drug develops within 3-6 hours after a single dose. The antihypertensive effect lasts for 24 hours. A stable clinical effect is achieved after 1-2 weeks of the drug, the maximum effect is achieved by 4-6 weeks after the start of treatment. After the cessation of taking the drug, blood pressure gradually returns to its original value. Withdrawal syndrome (the effect of hypertension recoil) is not observed.
Aprovel has no effect on the concentration of triglycerides, cholesterol, glucose, uric acid in the blood plasma or the excretion of uric acid in the urine.

- pregnancy;
- lactation;
- children's and teenage age up to 18 years;
- Hypersensitivity to the components of the drug Aprovel.

Aprovel is contraindicated for use in pregnancy. If pregnancy occurs during treatment, the drug should be immediately canceled.
If necessary, the appointment of the drug during lactation should decide on the termination of breastfeeding.

Initial and maintenance doses are 150 mg 1 time / day. If necessary, the dose can be increased to 300 mg 1 time / day.
Aprovel can be taken with meals or on an empty stomach. pills should be swallowed whole with water.

In the placebo-controlled studies (1965 patients received irbesartan), the following adverse reactions were noted.
From the side of the central nervous system: often dizziness.
Cardiovascular: sometimes - tachycardia, hot flashes.
Respiratory: sometimes cough.
Gastrointestinal: often - nausea, vomiting; sometimes - diarrhea, dyspepsia, heartburn.
From the reproductive system: sometimes sexual dysfunction.
On the part of the body as a whole: often - fatigue; sometimes - pain in the chest.
From the laboratory indicators: often - a significant increase in CPK (1.7%), not accompanied by clinical manifestations of the musculoskeletal system.
In patients with arterial hypertension and diabetes mellitus type 2 and microalbuminuria with normal renal function, orthostatic dizziness and orthostatic hypotension were observed in 0.5% of patients (more often than when taking placebo). In patients with diabetes mellitus with elevated blood pressure with microalbuminuria and normal renal function, hyperkalemia (more than 5.5% mmol / l) was found in 29.4% of patients in the group receiving irbesartan at a dose of 300 mg and 22% of patients in the group receiving placebo.
In patients with arterial hypertension with diabetes mellitus, chronic renal failure and severe proteinuria, in 2% of patients, the following additional adverse reactions were noted (more often than when taking placebo).
From the side of the central nervous system: often - orthostatic dizziness.
Cardiovascular: often - orthostatic hypotension.
Musculoskeletal system: often - pain in the bones and muscles.
From the laboratory indicators: hyperkalemia (more than 5.5% mmol / l) occurred in 46.3% of patients in the group of patients receiving irbesartan, and in 26.3% of patients in the placebo group. A decrease in hemoglobin, which was not clinically significant, was noted in 1.7% of patients receiving irbesartan.
In the post-marketing period, the following adverse reactions were also identified:
Allergic reactions: rarely, rash, urticaria, angioedema (as with other angiotensin II receptor antagonists).
Metabolism: very rarely - hyperkalemia.
From the side of the central nervous system: very rarely - headache, ringing in the ears.
Gastrointestinal: very rarely - dyspepsia, abnormal liver function, hepatitis.
Musculoskeletal system: very rarely - myalgia, arthralgia.
Urogenital: very seldom - renal dysfunction (including isolated cases of renal failure in susceptible patients).

With caution, Aprovel should be prescribed to patients with bilateral renal artery stenosis due to the possible risk of severe hypotension and acute renal failure.
The previous administration of the drug Aprovel diuretic treatment in high doses can lead to dehydration and increases the risk of arterial hypotension at the beginning of treatment with Aprovel. In dehydrated patients or in patients with a deficiency of sodium ions as a result of intensive treatment with diuretics, restriction of salt intake from food, diarrhea or vomiting, as well as in patients on hemodialysis, dose adjustment is required in the direction of its reduction.
The results of experimental studies
In studies conducted on laboratory animals, the mutagenic, clastogenic and carcinogenic effects of the drug Aprovel have not been established.
Use in pediatrics
Safety and efficacy of the drug in children have not been established.
Influence on ability to drive motor transport and control mechanisms
There are no indications about the effect of taking the drug Aprovel on the ability to drive vehicles and control mechanisms.

When taking the drug in a dose of up to 900 mg / day for 8 weeks did not reveal any toxicity.
Treatment: in case of accidental use of the drug in high doses, gastric lavage and symptomatic therapy are indicated. Irbesartan is not removed from the body during hemodialysis.

The drug should be stored at temperatures below 30 ° C.