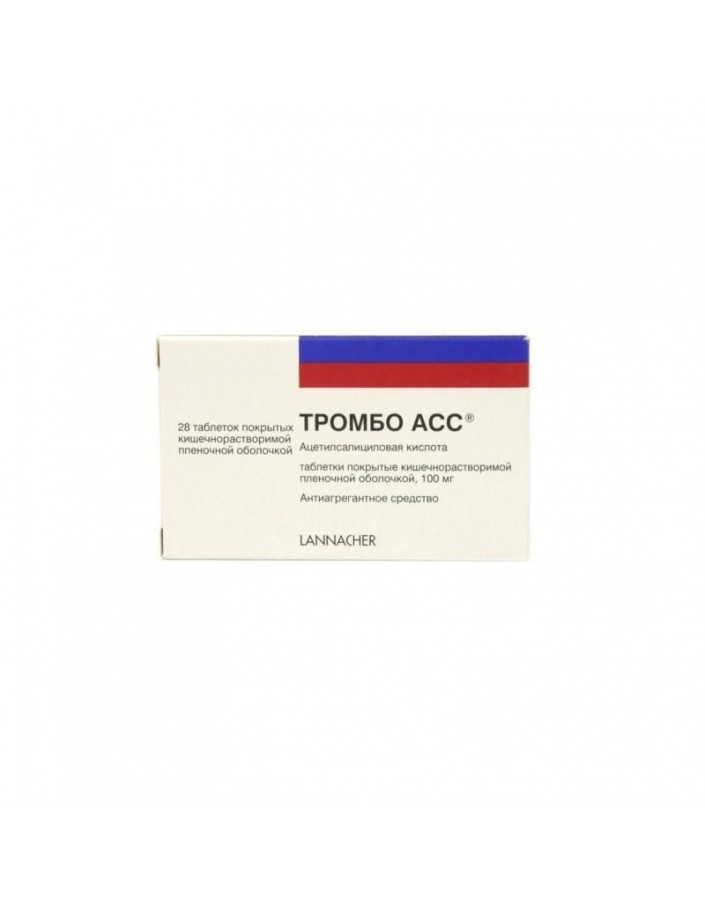 Thrombos Ass - NSAID, antiplatelet.
Lowers blood clotting due to the reduction of platelet aggregation due to the suppression of the synthesis of thromboxane A in them2.
The use of thrombotic ACC, starting with a dose of 50 mg, leads to a long-term decrease of 90-95% in serum concentration of thromboxane A2 and its metabolites.
It also has anti-inflammatory, analgesic and antipyretic effect.
Tablets of the drug are coated with enteric film resistant to the action of gastric juice, thereby reducing the risk of side effects from the stomach.

Assign inside 50-100 mg 1 time per day.
pills should be taken without chewing, with a small amount of liquid.
Thrombone ACC is intended for long-term use. The duration of therapy is determined individually.

Allergic reactions: bronchospasm, skin rash. In predisposed patients - provocation of attacks of bronchial asthma.
Gastrointestinal: nausea, vomiting, diarrhea.
Hemic and lymphatic: thrombocytopenia, iron deficiency anemia (due to latent bleeding from the gastrointestinal tract).
From the reproductive system: prolongation of menstruation.
With prolonged use of the drug in high doses, renal dysfunction, dizziness, tinnitus, ulcerative lesions of the gastrointestinal tract, bleeding are possible.
In general, Thrombotic ACC is well tolerated by patients (due to the low content of acetylsalicylic acid in the preparation). Side effects are noted in some cases.

Do not recommend the use of Thrombotic ACC in the third trimester of pregnancy, as well as the use of the drug as part of combination therapy in the I and II trimesters of pregnancy.
Thrombosis ACC is contraindicated for use during lactation (breastfeeding).

Care should be taken when prescribing the drug to patients with indications of a history of hypersensitivity reactions with the use of NSAIDs, with erosive-ulcerative and inflammatory diseases of the gastrointestinal tract outside the acute phase, with abnormal liver function and / or kidneys.
When using the drug development addiction was not observed.

With the simultaneous use of Thrombotic ACC enhances the action of anticoagulants, NSAIDs, hypoglycemic agents, Methotrexate.
The combined use of Thrombone ACC with glucocorticoids and ethanol increases the likelihood of ulcerogenic action of the drug, increases the risk of Gastrointestinal bleeding.
With simultaneous use of Thrombone ACC weakens the effect of diuretics (spironolactone, furosemide) and urikozuricheskimi drugs (if necessary, the combined use of Thromboth ACC and the above preparations, the interval should be at least 1-3 hours).
Simultaneous administration of antacids has no significant effect on the bioavailability of acetylsalicylic acid.