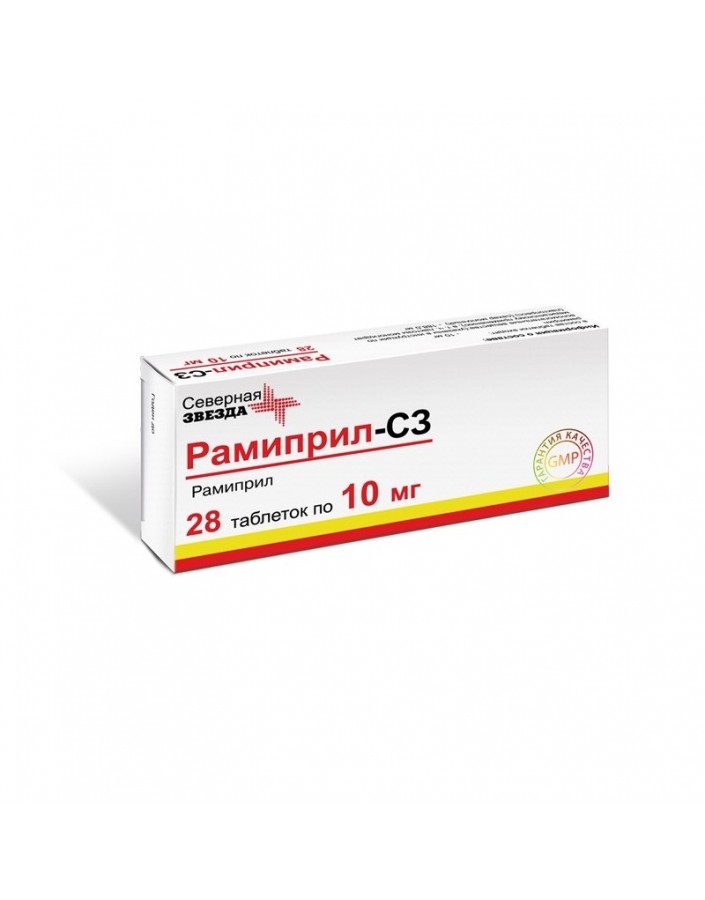 Ramipril-SZ is an ACE inhibitor. It is a prodrug from which the active metabolite ramiprilat is formed in the body. It is believed that the mechanism of antihypertensive action is associated with competitive inhibition of ACE activity, which leads to a decrease in the rate of angiotensin I conversion to angiotensin II, which is a powerful vasoconstrictor. As a result of a decrease in the concentration of angiotensin II, a secondary increase in plasma renin activity occurs due to the elimination of negative feedback during renin release and a direct decrease in aldosterone secretion. Due to the vasodilating action, it reduces the round fist (afterload), the pressure of jamming in the pulmonary capillaries (preload) and the resistance in the pulmonary vessels; increases heart volume and load tolerance.
In patients with signs of chronic heart failure after myocardial infarction, ramipril reduces the risk of sudden death, the progression of heart failure to severe / resistant failure, and reduces the number of hospitalizations for heart failure.
Ramipril is known to significantly reduce the incidence of myocardial infarction,stroke and cardiovascular death in patients with increased cardiovascular risk due to vascular diseases (coronary artery disease, stroke or peripheral vascular disease) or diabetes mellitus, who have at least one additional risk factor (microalbuminuria, arterial hypertension, increased total cholesterol, low HDL, smoking). Reduces overall mortality and the need for revascularization procedures, slows the onset and progression of chronic heart failure. As with patients with diabetes, and without it, ramipril significantly reduces the existing microalbuminuria and the risk of nephropathy. These effects are observed in patients with both elevated and normal blood pressure.
The hypotensive effect of ramipril develops after about 1-2 hours, reaches a maximum within 3-6 hours, lasts at least 24 hours.

Contraindicated in pregnancy. Before starting treatment, make sure that there is no pregnancy. If the patient becomes pregnant during the treatment period, it is necessary to replace the drug therapy with ramipril as soon as possible with another therapy. Otherwise, there is a risk of damage to the fetus, especially in the first trimester of pregnancy.

Category of action on the fetus by the FDA - D.

At the time of treatment should stop breastfeeding.

The treatment is carried out with regular medical supervision. Prior to treatment (1 week), previous antihypertensive therapy, incl. diuretics should be abolished (if it is impossible to cancel diuretics, reduce the dose and correct the water-electrolyte balance). In patients with malignant hypertension, the dose is increased gradually, every 24 hours, under the control of blood pressure until the maximum effect is achieved. During therapy, blood pressure monitoring is necessary, constant monitoring of the peripheral blood pattern (before starting treatment,first 3-6 months of treatment and with periodic intervals in the future up to 1 year, especially in patients with an increased risk of neutropenia), protein levels, plasma potassium, urea nitrogen, creatinine, kidney function, body weight, diet. With the development of hyponatremia and dehydration in a patient, correction of the dosing regimen (reduction of doses) is necessary. With the development of cholestatic jaundice and the progression of fulminant necrosis of the liver, treatment is stopped. Hemodialysis should be avoided through high-performance membranes made of polyacrylonitrilemetal alkyl sulfate (for example AN69), hemofiltration, or LDL apheresis (anaphylaxis or anaphylactoid reactions are possible). It should be borne in mind that the use of ramipril in patients with autoimmune diseases and syndromes increases the risk of developing neutropenia. Desensitization therapy may increase the risk of Anaphylactic reactions. It is recommended to exclude the use of alcoholic beverages during treatment. Use with caution while working drivers of vehicles and people whose profession is associated with increased concentration of attention.

Tablets must be swallowed whole (do not chew), and drink plenty of water (1/2 cup) of water, regardless of the meal (that is, pills can be taken both before and during or after meals). The dose is selected depending on the therapeutic effect and tolerability of the drug by the patient.Treatment with Ramipril-SZ is usually long, and its duration in each particular case is determined by the doctor. Unless otherwise prescribed, the following dosing regimens are recommended for normal kidney and liver function.
With essential hypertension
Usually the initial dose is 2.5 mg 1 time per day in the morning. If, when taking the drug in this dose for 3 weeks or more, it is not possible to normalize blood pressure, then the dose may be increased to 5 mg of ramipril per day. With insufficient effectiveness of the dose of 5 mg in 2-3 weeks, it can be doubled to the maximum recommended daily dose of 10 mg per day. As an alternative to increasing the dose to 10 mg per day with insufficient hypotensive efficacy of a daily dose of 5 mg, other antihypertensive drugs, in particular diuretics or “slow” Calcium channel blockers, can be added to the treatment.
In chronic heart failure
Recommended initial dose: 1.25 mg 1 time per day (1/2 pill 2.5 mg). Depending on the patient's response to therapy, the dose may increase. It is recommended to double the dose at intervals of 1-2 weeks. If a daily dose of 2.5 mg or more is required, it can be given once a day or divided into 2 doses. The maximum recommended daily dose is 10 mg.
With diabetic or non-diabetic nephropathy
Recommended initial dose: 1.25 mg 1 time per day (1/2 pill 2.5 mg).The dose may be increased to 5 mg once a day. In these conditions, doses higher than 5 mg once a day have not been studied enough in controlled clinical trials.
To reduce the risk of myocardial infarction, stroke or cardiovascular mortality in patients with high cardiovascular risk
The recommended initial dose: 2.5 mg 1 time per day. Depending on the patient's tolerance of the drug, the dose can be gradually increased. It is recommended to double the dose after 1 week of treatment, and in the next 3 weeks of treatment to increase it to the usual maintenance dose of 10 mg 1 time per day. Doses in excess of 10 mg are not well understood in controlled clinical trials. The use of the drug in patients with QA less than 0.6 ml / sec has not been studied enough.
In heart failure that developed during the first few days (from 2nd to 9th day) after acute myocardial infarction
The recommended initial dose is 5 mg per day, divided into two single doses of 2.5 mg, which are taken one in the morning and the second in the evening. If the patient does not tolerate this initial dose (there is an excessive decrease in blood pressure), then it is recommended that he give 1.25 mg 2 times a day for two days (1/2 pill 2.5 mg). Then, depending on the response of the patient, the dose may be increased. It is recommended that the dose with its increase doubled with an interval of 1-3 days. Later, the total daily dose, which was initially divided into two doses, can be given once.The maximum recommended dose is 10 mg. Currently, the experience of treating patients with severe heart failure (III-IV functional class according to the NYHA classification), which arose immediately after an acute myocardial infarction, is insufficient. If such patients decide on treatment with Ramipril-SZ, it is recommended that treatment should be started with the lowest possible dose - 1.25 mg once a day (1/2 pill 2.5 mg) and special care should be exercised at every increase. doses.

Contraindications
- The use of some high-flow membranes with a negatively charged surface (for example, polyacrylonitrile membranes) during hemodialysis or hemofiltration; the use of dextran sulfate in the apheresis of low density lipoproteins The risk of developing severe anaphylactic reactions.
Not recommended combinations
- With potassium salts, potassium-sparing diuretics (for example, amiloride, triamterene, spironolactone) A more pronounced increase in serum potassium is possible (with simultaneous use, careful monitoring of serum potassium is required).
Combinations that should be used with caution
- With antihypertensive drugs (especially diuretics) and other drugs that reduce blood pressure (nitrates, tricyclic antidepressants) Potentiation of the hypotensive effect; when combined with diuretics, serum sodium should be monitored.
- With sleeping pills, narcotic and non-narcotic analgesics Perhaps a more pronounced decrease in blood pressure;
- With vasopressor sympathomimetics (epinephrine) Reduction of the hypotensive effect of ramipril, careful control of blood pressure is required.
- With Allopurinol , procainamide, cytostatics, immunosuppressants, systemic glucocorticosteroids and other drugs that may affect hematological parameters. Combined use increases the risk of leukopenia.
- With lithium salts Increase in serum lithium concentration and enhance the cardio - and neurotoxic effects of lithium.
- With oral hypoglycemic agents (sulfonylurea derivatives, biguanides), insulin In connection with a decrease in insulin resistance under the influence of ramipril, the hypoglycemic effect of these drugs may increase, up to the development of hypoglycemia.Combinations to be taken into account
- With nonsteroidal anti-inflammatory drugs (indomethacin, acetylsalicylic acid) It is possible to weaken the effect of ramipril, increase the risk of renal dysfunction and increase serum potassium.
- With Heparin It is possible to increase the content of potassium in the blood serum.
- With sodium chloride. Weakening of the hypotensive effect of ramipril and less effective treatment of the symptoms of chronic heart failure.
- With ethanol. Enhanced vasodilation. Ramipril may increase the adverse effects of ethanol on the body.
- With estrogens Weakening of the hypotensive effect of ramipril (fluid retention).
- Desensitization therapy in case of hypersensitivity to the poisons of insects ACE inhibitors, including ramipril, increase the likelihood of severe anaphylactic or anaphylactoid reactions to insect poisons. With the simultaneous use of ACE inhibitors and gold preparations (sodium aurothiomalate) for intravenous administration, a symptom complex has been described, including facial flushing, nausea, vomiting, and arterial hypotension.

Treatment: gastric lavage, taking adsorbents, sodium sulfate (if possible during the first 30 minutes). In the case of a pronounced decrease in blood pressure, the introduction of alpha1-adrenergic agonists (norepinephrine, dopamine) can be added to the therapy to replenish the circulating blood volume and restore electrolyte balance. In the case of bradycardia refractory to a drug treatment, it may be necessary to install a temporary artificial pacemaker.In case of overdose, it is necessary to monitor serum concentrations of creatinine and electrolytes.

In dry, the dark place at a temperature of no higher than 25 aboutC. Keep out of the reach of children.