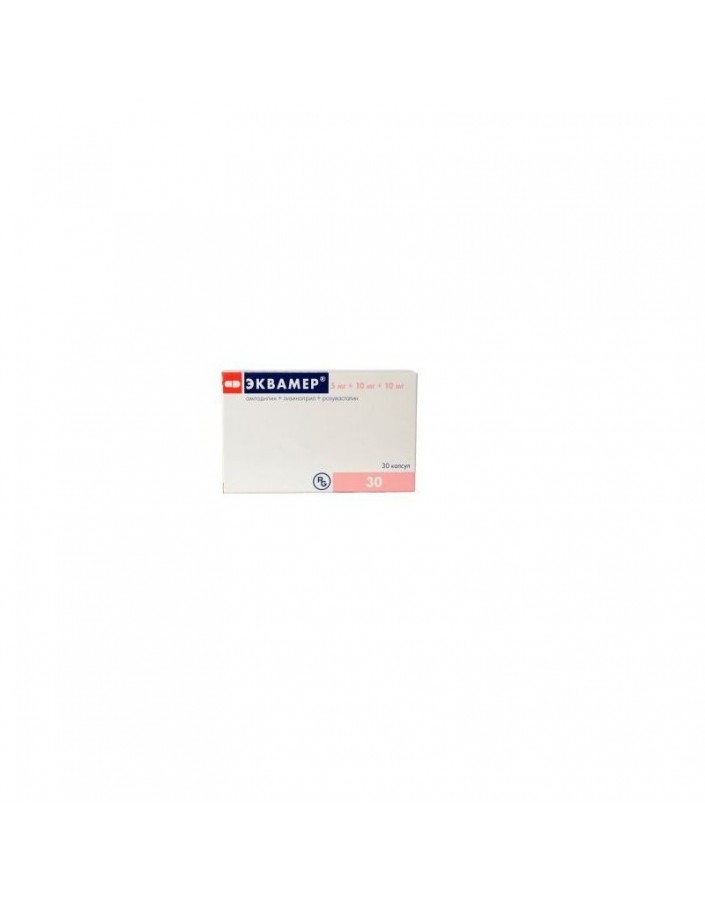 From the organ of hearing: infrequently - tinnitus.

From the genital and breast organs: infrequently - erectile dysfunction, gynecomastia.

On the part of the endocrine system: unknown frequency - syndrome of inadequate secretion of antidiuretic hormone.

From the genital and breast organs: infrequently - reduction of potency; rarely - gynecomastia.

Other: frequency is unknown - fever (there are reports of lupus-like syndrome, which may include fever, myalgia, arthralgia / arthritis, an increase in antinuclear antibody titer, an increase in ESR, eosinophilia, leukocytosis, may also develop rashes, photosensitivity reactions or other skin manifestations).

With the simultaneous use of ACE inhibitors and gold preparations for intravenous injection (sodium aurothiomalate), a symptom complex is described, including facial flushing, nausea, vomiting, and a decrease in blood pressure.

The side effects observed with rosuvastatin are usually mild and do not go away on their own. As with the use of other inhibitors of HMG-CoA reductase, the frequency of side effects is mainly dose-dependent.

Hemic and lymphatic: the frequency is unknown - thrombocytopenia.

On the part of the endocrine system: often - type 2 diabetes (frequency will depend on the presence or absence of risk factors (fasting glucose concentration ≥5.6 mmol / l, BMI> 30 kg / m2, an increased concentration of triglycerides, a history of arterial hypertension)); frequency is unknown - dysfunction of the thyroid gland.

From the genital and breast organs: frequency unknown - gynecomastia.

Musculoskeletal system: often myalgia; rarely, myopathy (including myositis), rhabdomyolysis with or without the development of acute renal failure; very rarely - arthralgia; unknown frequency - immune-mediated necrotizing myopathy, tendon diseases, in some cases complicated by rupture, temporary increase in CPK activity. In the case of increased activity of CPK (more than 5 times compared with VGN) therapy should be discontinued.

The following side effects have been reported with the use of some HMG-CoA reductase inhibitors:

- angioedema in history, including when using ACE inhibitors;

- obstruction of the excretory tract of the left ventricle (including severe aortic stenosis);

- predisposition to the development of myotoxic complications;

- simultaneous use with aliskiren-containing drugs in patients with diabetes or renal failure (GFR less than 60 ml / min / 1.73 m2);

- simultaneous use of cyclosporine;

- use in women who do not use adequate methods of contraception;

- children's and teenage age up to 18 years (efficiency and safety are not established);

- Hypersensitivity to amlodipine or other dihydropyridine derivatives;

- Hypersensitivity to lisinopril or other ACE inhibitors;

- Hypersensitivity to any of the auxiliary components of the drug.

Experience with rosuvastatin in patients with a score above 9 on the Child-Pugh scale is absent.

WITH caution the drug should be prescribed for aortic stenosis; mitral stenosis; hypertrophic obstructive cardiomyopathy; hypotension; cerebrovascular diseases (including cerebrovascular insufficiency); CHD; coronary insufficiency; CHF of non-ischemic etiology of III-IV functional class according to NYHA classification; acute myocardial infarction (and for 1 month after it); unstable angina; SSS (severe tachycardia or bradycardia); severe autoimmune systemic diseases of the connective tissue (including systemic lupus erythematosus, scleroderma); oppression of bone marrow hematopoiesis; diabetes; hyperkalemia; bilateral stenosis of the renal arteries or stenosis of the artery of a single kidney;condition after kidney transplantation; renal failure mild and moderate severity (CC 30-80 ml / min); azotemia; primary aldosteronism; dietary salt control; conditions accompanied by a decrease in BCC (including vomiting, diarrhea); mild hepatic insufficiency (5-6 points on the Child-Pugh scale) and moderate severity (7-9 points on the Child-Pugh scale); hypothyroidism; indication in a personal or family history of hereditary muscular diseases and muscular toxicity in history with the use of other HMG-CoA reductase inhibitors or fibrates; with the simultaneous use of fibrates; a history of liver disease; sepsis; extensive surgical interventions; injuries; severe metabolic, endocrine, or water-electrolyte disturbances or uncontrolled convulsive seizures; conditions in which there is an increase in the plasma concentration of rosuvastatin; alcohol abuse; in patients of the Mongoloid race; elderly patients.

Use of the drug Equamer® contraindicated in pregnancy.

Adequate strictly controlled clinical studies on the action of the drug Equamer® during pregnancy was not carried out.

The use of ACE inhibitors in the II and III trimesters of pregnancy can cause death of the fetus and newborn.Perhaps the development of low water during pregnancy, as well as hypoplasia of the skull bones, deformation of the bones of the skull and face, lung hypoplasia and impaired kidney development in the newborn.

Since cholesterol and other cholesterol biosynthesis products are important for fetal development, the potential risk of inhibition of HMG-CoA reductase exceeds the benefits of rosuvastatin in pregnancy.

Women of reproductive age should use adequate methods of contraception. If pregnancy occurs during therapy, the drug should be immediately discontinued and, if necessary, alternative treatment should be prescribed.

Use of the drug Equamer® contraindicated during breastfeeding. It is not known whether the active ingredients are excreted in breast milk. It is known that they penetrate the milk of lactating rats. If necessary, the use of the drug during lactation breastfeeding should be stopped.

Adequate strictly controlled clinical studies on the action of the drug Equamer® fertility was not carried out.

With caution should be prescribed the drug in case of renal failure of mild and moderate severity (CC 30-80 ml / min).

The use of the drug in patients with severe renal failure (CC less than 30 ml / min) is contraindicated.

The drug is contraindicated in children and adolescents under 18 years of age (efficacy and safety have not been established).

Have elderly patients the drug should be used with caution.

If a patient is hospitalized in a hospital, he must inform the doctor that he is taking the drug Equamer.®.

If the patient forgot to take a capsule of the drug Equamer®The following capsule should be taken at the usual time. You should not take a double dose to make up the missed dose.

When using the drug Equamer® recommendations for the use of individual components of the drug, described in detail below, should be considered.

It is necessary to maintain dental hygiene and observation at the dentist (to prevent pain, bleeding and gum hyperplasia).

Elderly patients may increase T1/2 and decrease clearance of amlodipine.Changing doses is not required, but more careful monitoring of patients in this category is needed.

The efficacy and safety of the use of amlodipine in hypertensive crisis has not been established.

Despite the absence of withdrawal syndrome in BMCC, it is advisable to stop the treatment with amlodipine, gradually reducing the dose of the drug.

Against the background of the use of amlodipine in patients with CHF of non-ischemic genesis of functional class III and IV, according to the NYHA classification, there was an increase in the incidence of pulmonary edema, despite the absence of signs of worsening heart failure.

Most often, an excessive decrease in blood pressure occurs with a decrease in BCC, caused by diuretic therapy, a decrease in table salt in food, dialysis, diarrhea and vomiting. In patients with CHF, as in the presence of concomitant renal failure, and in its absence, the development of symptomatic arterial hypotension is possible. Hypotension was more frequently detected in patients with severe heart failure as a result of the use of diuretic in high doses, hyponatremia or impaired renal function. In such patients, therapy should begin under the strict supervision of a physician (with caution, select the dose of lisinopril and diuretics). Similar rules should be followed when prescribing lisinopril to patients with coronary artery disease, cerebrovascular insufficiency, in which a sharp decrease in blood pressure can lead to myocardial infarction or stroke.

In the event of an excessive decrease in the patient's blood pressure, the patient should be laid down and, if necessary, compensated for the loss of fluid (IV infusion of 0.9% sodium chloride solution). The transient hypotensive reaction is not a contraindication for taking the next dose of lisinopril.

Patients who are at risk of developing symptomatic hypotension (who are on a diet with salt restriction or salt-free diet) with or without hyponatremia, as well as in patients who received diuretics in high doses, must compensate for the loss of fluids and salts before starting treatment.

It is necessary to control the antihypertensive effect of the initial dose of lisinopril.

As in the case of other ACE inhibitors, lisinopril should be used with caution in patients with mitral valve stenosis and obstruction of the left ventricular excretory tract (aortic stenosis or hypertrophic obstructive cardiomyopathy).

The use of standard therapy (thrombolytic agents, Acetylsalicylic acid as an antiplatelet agent, beta-blockers) is shown.

Lisinopril can be used in conjunction with the on / in the introduction of Nitroglycerin or with the use of nitroglycerin in the form of a transdermal system.

Lysinopril therapy should not be initiated in patients with acute myocardial infarction, who are at risk of further serious hemodynamic deterioration after the use of vasodilators (patients with systolic BP 100 mmHg or less, patients with cardiogenic shock). During the first 3 days after myocardial infarction, the dose of lisinopril should be reduced if systolic BP is 120 mmHg. st. or lower. Maintenance doses of lisinopril should be reduced to 5 mg or temporarily to 2.5 mg if systolic blood pressure is 100 mmHg. st. or lower. If arterial hypotension persists (systolic blood pressure less than 90 mmHg for more than 1 hour), lisinopril should not be continued.

In patients with CHF, an excessive decrease in blood pressure after the start of treatment with ACE inhibitors can lead to a further deterioration in renal function. Cases of acute renal failure.

In patients with bilateral renal artery stenosis or arterial stenosis of a single kidney who received ACE inhibitors, there was an increase in serum urea and creatinine, usually reversible after stopping treatment and more common in patients with renal insufficiency.

Lisinoporil is not used for acute myocardial infarction in patients with severe impaired renal function, established when the serum creatinine concentration exceeds 177 µmol / L and / or proteinuria exceeds 500 mg / day.If renal dysfunction develops during lisinopril therapy (serum creatinine concentration in excess of 265 µmol / L, or doubling the value compared to the value before treatment), the need for further use of lisinopril should be evaluated.

Angioedema of the face, extremities, lips, tongue, epiglottis and / or larynx, which can occur during any period of therapy, has been rarely seen in patients treated with an ACE inhibitor, including lisinopril. In this case, therapy with lisinopril should be stopped as soon as possible and the patient should be monitored until symptoms are fully regressed. In cases when edema occurs only on the face and lips, this condition most often disappears without treatment, however, it is possible to use antihistamines.

Angioedema with laryngeal edema can be fatal. Swelling of the tongue, epiglottis, or larynx can cause airway obstruction, therefore, it is necessary to immediately conduct appropriate therapy (0.3-0.5 ml of 1: 1000 solution of epinephrine (adrenaline) s / c) and / or take measures to ensure the airway is permeable. It was noted that patients of the Negroid race taking ACE inhibitors developed angioedema more often than patients of other races.

In patients taking ACE inhibitors, angioedema was rarely observed.These patients complained of abdominal pain (with or without nausea and vomiting); in some cases, no previous angioedema of the face was observed, and C-1 esterase activity was within the normal range. Angioedema of the intestine was diagnosed according to computed tomography of the gastrointestinal tract or ultrasound, or during surgery; symptoms disappeared after discontinuation of the ACE inhibitor. The differential diagnosis of abdominal pain in patients taking ACE inhibitors should take into account the development of angioedema.

Anaphylactic reactions during the desensitization procedure

Patients receiving ACE inhibitors during a course of desensitization (for example, hymenoptera poison), in very rare cases, may develop life-threatening Anaphylactic reactions . This can be avoided if you temporarily cancel the ACE inhibitor before each desensitization procedure begins.

The use of ACE inhibitors can lead to the development of cholestatic jaundice with a progression up to fulminant necrosis of the liver, so it is necessary to stop taking lisinopril with increased activity of hepatic transaminases and the appearance of cholestasis symptoms.

Anaphylactic reactions are also observed in patients on hemodialysis using high-flow membranes (for example, AN69®) and taking simultaneously ACE inhibitors. If hemodialysis is needed, it is necessary to use another type of membrane or another antihypertensive.