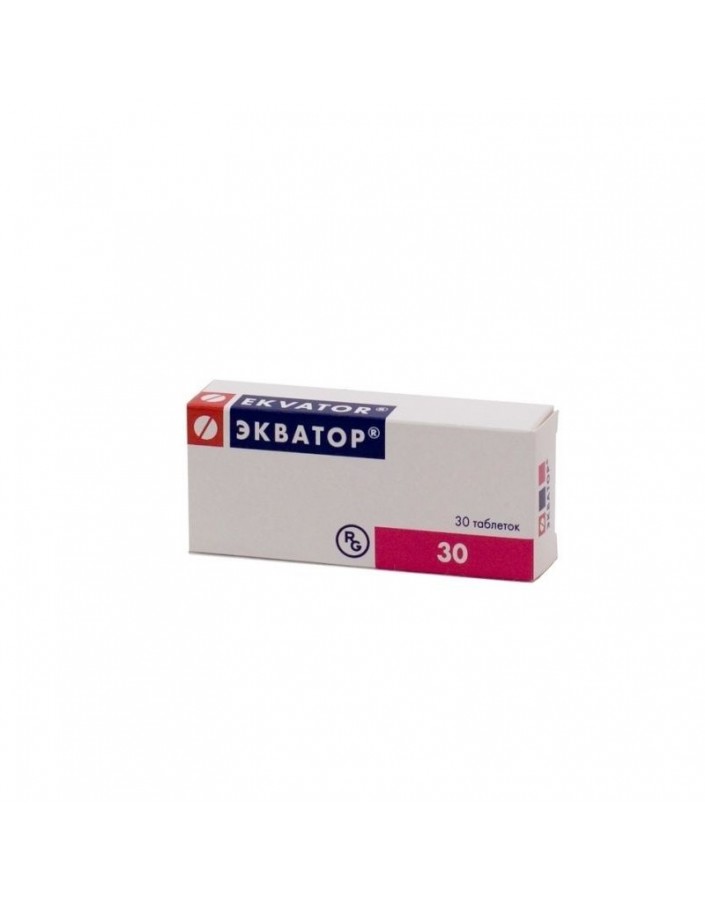 Tablets are round, flat, white or almost white in color, with a facet, with a risk on one side and engraved "A + L" on the other side.

Essential arterial hypertension (with the need for combination therapy).

- angioedema in history, including caused by the use of other ACE inhibitors;
- hereditary or idiopathic angioedema;
- hemodynamically significant stenosis of the aorta or mitral valve;
- hypertrophic obstructive cardiomyopathy;
- severe hypotension;
- cardiogenic shock;
- pregnancy;
- lactation period;
- children and adolescents under 18 years of age (due to the lack of data on the efficacy and safety of the drug in this age group);
- Hypersensitivity to the components of the drug or to other derivatives of dihydropyridine.

The Equator should be used with caution in cerebrovascular diseases (including those with cerebral circulation insufficiency), IHD, severe bradycardia, tachycardia, chronic heart failure in the decompensation stage, in case of mild or moderate arterial hypotension, SSS, severe autoimmune diseases (in t. including scleroderma, SLE), in the suppression of bone marrow hematopoiesis, diabetes mellitus, hyperkalemia, condition after kidney transplantation, renal failure, sodium-restricted diet, in patients with younger age, with liver failure. In acute myocardial infarction and within one month after it.

The drug is contraindicated for use in pregnancy. If pregnancy is detected, treatment should be stopped as soon as possible.
Reception of lisinopril in the II and III trimesters of pregnancy can cause damage and death of the fetus as a result of the influence on its kidneys (arterial hypotension, renal failure, hyperkalemia). Reducing the amount of amniotic fluid can lead to deformation of the skull and face, impaired limb development, lung hypoplasia, and fetal death. Data on similar and other influences in the earlier stages of pregnancy are not available.
Taking the drug during lactation is contraindicated due to the release of amlodipine with breast milk. Data indicating penetration of lisinopril into breast milk are not available.

It is recommended to use in cases where the administration of drugs containing the Equator active substances separately in the same doses does not provide the necessary control of blood pressure. The drug is taken orally, regardless of the meal.
For patients not receiving antihypertensive drugs, the daily dose is 1 tablet.
In the case of prior diuretic therapy, 2-3 days before the start of Equator administration, the diuretic should be canceled. If diuretic cancellation is not possible, the initial dose of Equator is 1/2 pill / After taking the drug, the patient is required to provide medical monitoring for several hours due to the possible development of symptomatic hypotension.
With heart failure and severe hypertension, maintenance dose is 1 tablet.
In renal insufficiency and CC 30-70 ml / min, half of the usual initial dose is prescribed (since lisinopril is eliminated by the kidneys). The maintenance dose depends on the individual response of the patient; during therapy, regular monitoring of renal function, the level of potassium and sodium in the blood is required.
In diseases of the liver, the elimination of amlodipine may slow down, so the initial dose of Equator is 1/2 tablet. Special care is required in this category of patients to use the drug.

Lisinopril
Potassium-sparing diuretics (for example, spironolactone, amiloride, and triamterene), dietary supplements with potassium, potassium-containing salt substitutes, and other medications that can increase serum potassium (for example, heparin) can lead to hyperkalemia when combined with ACE inhibitors, especially in patients with renal failure and other kidney diseases in history. When prescribing a drug that affects the concentration of potassium, simultaneously with lisinopril, the concentration of potassium in the blood serum should be monitored. Therefore, the simultaneous appointment should be carefully justified and made with extreme caution and regular monitoring of both the level of potassium in the blood serum and kidney function.Potassium-sparing diuretics can be taken in conjunction with the Equator preparation only under the condition of medical control. In the case of the appointment of a diuretic to a patient receiving the Equator, the hypotensive effect is usually enhanced. It is therefore necessary with extreme caution to take Equator® in combination with diuretics. Lisinopril softens the potassium uretic effect of diuretics. With the simultaneous use of other antihypertensive drugs, the hypotensive effect of the drug Equator may be enhanced.
When taken simultaneously with nitroglycerin, other nitrates or vasodilators, a more pronounced decrease in blood pressure is possible.
With the simultaneous use of ACE inhibitors tricyclic antidepressants / antipsychotic drugs, agents for general anesthesia, opioid analgesics: perhaps a more pronounced decrease in blood pressure.
Ethanol enhances the hypotensive effect of the drug. Allopurinol, procainamide, cytotoxic drugs or immunosuppressants (systemic corticosteroids) may increase the risk of leukopenia while being used with ACE inhibitors.
Aitacides and colestyramine, while taking it with ACE inhibitors, reduce the bioavailability of the latter.
Sympathomimetics can reduce the hypotensive effect of ACE inhibitors; it is necessary to carefully monitor the achievement of the desired effect. While taking ACE inhibitors and hypoglycemic drugs (insulin and hypoglycemic agents for oral administration) at the same time, there is an increase in the probability of reducing the concentration of glucose in the blood and the risk of hypoglycemia.Most often this phenomenon occurs during the first week of combined treatment and in patients with renal insufficiency. With prolonged use of NSAIDs, including Acetylsalicylic acid in high doses, it is possible to reduce the effectiveness of ACE inhibitors. The additive effect when taking NSAIDs and ACE inhibitors is manifested by an increase in the level of potassium in the blood serum and can lead to a deterioration in renal function. These effects are usually reversible. Very rarely, the development of acute renal failure is possible, especially in elderly patients and patients in a state of dehydration.
The removal of lithium can be slowed down during simultaneous administration with ACE inhibitors and therefore the concentration of lithium in the blood serum should be monitored during this period. When used together with lithium preparations, it is possible to increase the manifestation of their neurotoxicity (nausea, vomiting, diarrhea, ataxia, tremor, tinnitus).
With the simultaneous use of ACE inhibitors and gold preparations (sodium aurothiomalate), a symptom complex is described in / in, including facial flushing, nausea, vomiting, and hypotension.
Amlodipine
Studies among elderly patients have shown that diltiazem inhibits amlodipine metabolism, probably due to inhibition of the CYP3A4 isoenzyme (plasma concentration increases by almost 50% and the effect of amlodipine increases). It is impossible to exclude the possibility that stronger inhibitors of the isoenzyme CYP3A4 (i.e.ketoconazole, itraconazole, ritonavir) are able to increase the concentration of amlodipine in the blood plasma to a greater extent than diltiazem. Simultaneous use should be carried out with caution.
Simultaneous use with CYP3A4 isoenzyme inducers - with antiepileptic drugs (for example, carbamazepyshum, phenobarbital, phenytoin, phosphenytoin, primidone), rifampicin, herbal preparations containing St. John's wort, is punched, it is possible to decrease the concentration of amlodipine in blood plasma. Clinical control was shown with possible dose adjustment of amlodipine during treatment with inducers of the CYP3A4 isoenzyme and after their withdrawal. Simultaneous use should be carried out with caution.
As a monotherapy, amlodipine was well combined with thiazide and "loopback" diuretics, general anesthesia agents, beta-adrenergic blockers, ACE inhibitors, long-acting nitrates, sublingual nitroglycerin, digoxin, Warfarin, Atorvastatin, Sildenafil, ants, antamine, antamine, anthrax, glycerol, digoxin, warfarin, atorvastatin, sildenafil., simethicone, cimetidine, NSAIDs, antibiotics and oral hypoglycemic drugs.
Amlodipine does not significantly affect the pharmacokinetics of ethanol. Calcium preparations can reduce the effect of slow calcium channel blockers. Amlodipine does not cause significant changes in the pharmacokinetics of cyclosporine.It is possible to reduce the hypotensive effect of the Equator, while taking it with estrogen, adrenostimulants. When used concomitantly with Equator®, procainamide, quinidine, and other drugs that prolong the QT interval can contribute to its significant lengthening.

Symptoms: excessive peripheral vasodilation with a pronounced decrease in blood pressure, acute vascular insufficiency, impaired water and electrolyte balance, renal failure, hyperventilation, tachycardia, bradycardia, dizziness, anxiety, cough.
Treatment: symptomatic therapy, control of cardiac activity, blood pressure, diuresis and water-electrolyte balance, if necessary, its correction. With a pronounced decrease in blood pressure, the patient is given a prone position, the lower limbs are raised; with an unsatisfactory therapeutic response to the on / in the introduction of fluid substitutes may require the introduction of dopamine. To stop the action of amlodipine, you can enter / in Calcium gluconate. If necessary, in / in the introduction of angiotensin II. Due to the slow absorption of amlodipine in some cases, the stomach is washed, using activated charcoal. Lisinopril is eliminated by hemodialysis; a strong degree of binding to blood proteins makes amlodipine dialysis ineffective.