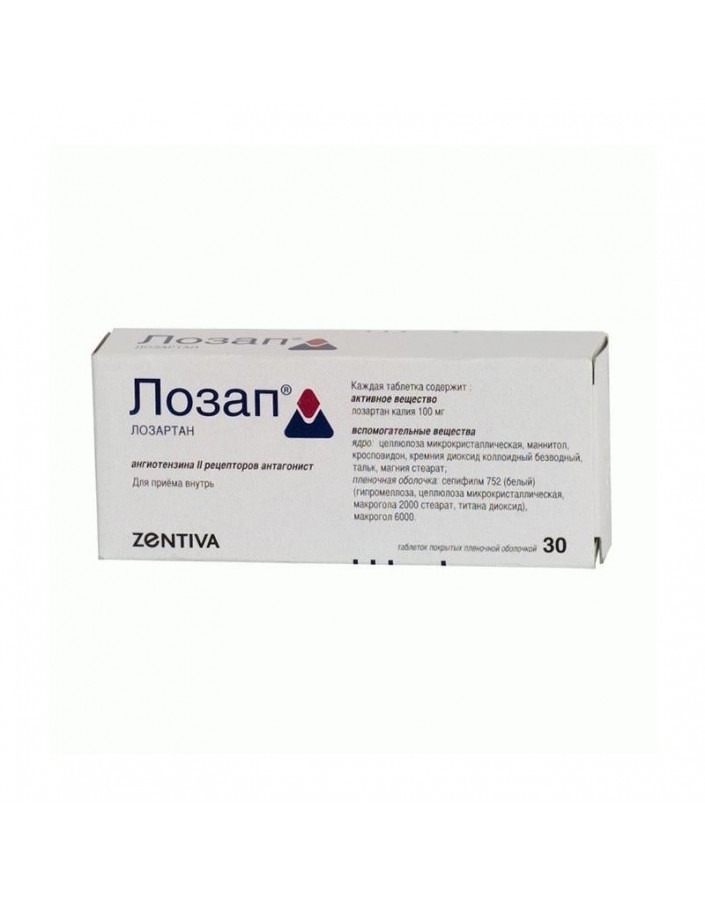 In the blister of 10 tablets. In carton pack 3 blisters.

Lozap - losartan is a specific angiotensin II receptor antagonist (subtype AT 1). He inhibits kinase II - an enzyme that catalyzes the reaction of converting angiotensin I to angiotensin II.

Reduces the OPSS, the concentration in the blood of adrenaline and aldosterone, blood pressure, pressure in the pulmonary circulation; reduces afterload, has a diuretic effect. Interferes with the development of myocardial hypertrophy, increases exercise tolerance in patients with heart failure.

Losartan does not inhibit angiotensin-converting enzyme (ACE) -kininase II and, accordingly, does not prevent the destruction of bradykinin, so side effects indirectly associated with bradykinin (for example, angioedema) occur quite rarely.

After a single oral administration, the hypotensive effect (the systolic and diastolic blood pressure decreases) reaches its maximum after 6 hours, then gradually decreases within 24 hours.

The maximal hypotensive effect develops through the BB weeks after the start of the drug.

In patients with arterial hypertension without concomitant diabetes mellitus with proteinuria (more than 2 g / day), the use of the drug significantly reduces proteinuria, the excretion of albumin and immunoglobulins G.

- Arterial hypertension.
- Chronic heart failure (as part of combination therapy, with intolerance or failure of therapy with ACE inhibitors).
- To reduce the risk of cardiovascular diseases (including stroke) and mortality in patients with arterial hypertension and left ventricular hypertrophy.
- Diabetic nephropathy in hypercreatininemia and proteinuria (the ratio of urine albumin to creatinine is more than 300 mg / g) in patients with type 2 diabetes and concomitant arterial hypertension (decrease in the progression of diabetic nephropathy to terminal chronic renal failure).

- Hypersensitivity to the drug.
- Pregnancy.
- Lactation period.
- Age up to 18 years (efficacy and safety have not been established).

There are no data on the use of Lozap during pregnancy. However, it is known that drugs acting directly on the renin-angiotensin system, when applied in the second and third trimesters of pregnancy, can cause a defect of development or even death of a developing fetus. Therefore, when a pregnancy occurs, Lozapa should be stopped immediately.

It is necessary to carry out the correction of dehydration before the appointment of Lozap or begin treatment with the use of the drug at a lower dose.

Drugs that affect the renin-angiotensin system may increase blood urea and serum creatinine in patients with bilateral renal stenosis or arterial stenosis of a single kidney.

During the period of treatment should regularly monitor the concentration of potassium in the blood, especially in elderly patients, with impaired renal function.

In patients with cirrhosis of the liver, the concentration of losartan in the blood plasma increases significantly, and therefore, if there is a history of liver diseases, it should be given in lower doses.

Losartan does not affect the ability to drive or operate machinery.

May be administered with other antihypertensives. Mutually enhances the effect of beta-blockers and sympatholytic. The combined use of losartan with diuretics has an additive effect.

Pharmacokinetic interactions of losartan with hydrochlorothiazide, Digoxin, Warfarin, cimetidine, phenobarbital, Ketoconazole and Erythromycin were not observed. Rifampicin and Fluconazole reportedly decrease the level of the active metabolite in the blood plasma. The clinical significance of these interactions is not yet known. As with the use of other agents that inhibit angiotensin II or its action,The combined use of losartan with potassium-sparing diuretics (for example, spironolactone, triamterene, amiloride), preparations of potassium and salts containing potassium, increases the risk of hyperkalemia.

Non-steroidal anti-inflammatory drugs (NSAIDs), including selective cyclooxygenase-2 inhibitors (C0G-2), may reduce the effect of diuretics and other antihypertensive drugs.

Store at a temperature not higher than 30 ° C.