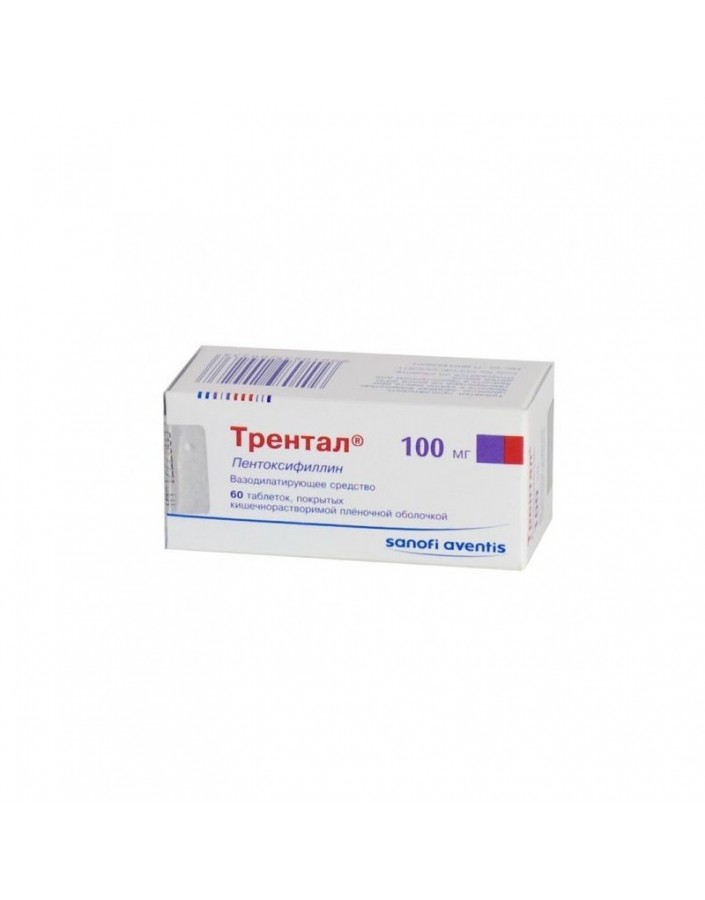 A drug that improves microcirculation. Angioprotector, a derivative of methylxanthine.
The mechanism of action of pentoxifylline is associated with inhibition of phosphodiesterase and accumulation of cAMP in vascular smooth muscle cells, in the blood cells, in other tissues and organs.
It inhibits platelet aggregation and red blood cells, increases their flexibility, reduces the increased concentration of fibrinogen in the plasma and increases fibrinolysis, which reduces blood viscosity and improves its rheological properties. It has a weak myotropic vasodilating effect, somewhat reduces the round focal disease and has a positive inotropic effect.When using the drug, there is an improvement in microcirculation and oxygen supply to tissues, to the greatest extent in the limbs and the central nervous system, and to a moderate degree in the kidneys. The drug slightly expands the coronary vessels.

Suction
After oral administration, pentoxifylline is almost completely absorbed from the gastrointestinal tract.
Bioavailability averages 19% (fluctuations from 6 to 32%).
Metabolism
The main pharmacologically active metabolite of 1- (5-hydroxyhexyl) -3,7-dimethylxanthine is determined in plasma at a concentration twice the concentration of unchanged substance, and is in a state of reversible biochemical equilibrium with it. For this reason, pentoxifylline and its metabolite should be considered as an active whole, therefore, we can assume that the bioavailability of the active substance is significantly higher.
Pentoxifylline is completely biotransformed in the body.
Removal
T1/2 pentoxifylline is 1.6 h.
More than 90% is excreted by the kidneys as unconjugated, water-soluble polar metabolites.
Pharmacokinetics in special clinical situations
In patients with severely impaired renal function, excretion of metabolites is delayed.
In patients with impaired liver function, prolonged T1/2 pentoxifylline and increase its bioavailability.

Set individually, depending on the severity of circulatory disorders, body weight and tolerance of therapy. The drug is recommended to be administered in / in the form of infusion, because This is the most effective and easily tolerated form of parenteral administration of the drug.
Recommend the following treatment regimen.
The drug is administered in the form of an infusion of 200-300 mg 2 times / day (morning and afternoon).
When the patient is in serious condition It is possible to conduct a long-term infusion of Trental within 24 hours. At the same time, the dose is determined from the calculation of 0.6 mg / kg body weight per hour. For a patient with a body weight of 70 kg the dose calculated in this way is 1 g, for a patient with a body weight of 80 kg - 1.15The maximum dose should not exceed 1.2 g. The volume of the infusion solution is set individually, taking into account associated diseases. The average volume is 1-1.15 liters for 24 hours.
In some cases, the drug is used as an intravenous injection at a dose of 100 mg (5 ml of solution). The injection is carried out slowly; Inject 5 ml of the solution within 5 minutes. During the injection, the patient should be in the supine position.
In addition to parenteral administration, Trental is prescribed orally at a dose of 800 mg after daily infusion; with a long interval between infusions, an additional 400 mg is prescribed between injections. In the case of an infusion of 1 time / day in the morning, orally, it is prescribed 800 mg daily and 400 mg in the evening.
Terms of preparation and administration of infusion solution
To prepare an infusion solution, the contents of 2 ampoules of 5 ml (100 mg) or 1 ampoules of 15 ml each (300 mg) of the solution for injection are diluted with 250 ml or 500 ml of Ringer's lactate solution, saline, 5% glucose or levulose solution, or standard blood-substituting solutions. The duration of infusion is 120-180 minutes.

The average dose of the drug for oral administration is 400 mg (1 tab.) 2-3 times / day. The maximum daily dose is 1200 mg (3 tab.).
Tablets are taken whole, without chewing, during or immediately after a meal, drinking plenty of water.
In patients with severe impaired renal function (CC less than 30 ml / min) The dose can be reduced to 400-800 mg / day.
In patients with hepatic impairment the dose of the drug is selected individually.

In cases of using Trental 400 in large doses there may be "hot flashes" (reddening of the face or feeling of heat), disorders of the digestive system, such as pressure and overflow in the stomach, nausea, vomiting, diarrhea; very rarely - cardiac arrhythmias (tachycardia).
Allergic reactions: sometimes itching, skin flushing, urticaria; rarely, severe anaphylactic / anaphylactoid reactions with the development of angioedema, bronchospasm, and even shock.
From the side of the central nervous system: possibly - dizziness, headache, agitation, sleep disturbance; very rarely are cases of aseptic meningitis.
Gastrointestinal: very rarely - increased activity of hepatic transaminases, intrahepatic cholestasis.
Cardiovascular: very rarely - attacks of angina, tachycardia, arterial hypotension.
From the blood coagulation system: very rarely - thrombocytopenia; in patients with an increased tendency to bleeding - bleeding (for example, from vessels of the skin, mucous membranes, stomach, intestines).

The drug is contraindicated for use in pregnancy.
If necessary, the use of the drug during lactation should stop breastfeeding.

Careful monitoring is necessary in patients with severe cardiac arrhythmias (risk of worsening arrhythmias), with arterial hypotension (risk of further reducing blood pressure),impaired renal function with QC less than 30 ml / min (risk of cumulation and an increased risk of side effects), severe impaired liver function (risk of cumulation and an increased risk of side effects) and an increased tendency to bleeding, for example, when using anticoagulants or blood coagulation system (risk of more severe bleeding).
Caution should be exercised in the appointment of Trental to patients with gastric ulcer and duodenal ulcer history; patients who have recently undergone surgery (increased risk of bleeding, and therefore requires systematic monitoring of hemoglobin and hematocrit).
Patients with arterial hypotension and labile blood circulation, parenteral administration of Trental is prescribed gradually, since blood pressure reduction is possible (up to collapse), and in some cases - angina attacks.
Patients with heart failure need appropriate treatment to compensate for blood circulation. At the same time, the introduction of a large volume of liquids should be avoided.
Patients with impaired renal function dosing regimen should be selected individually.

Symptoms: nausea, dizziness, tachycardia, lowering blood pressure, arrhythmia, skin hyperemia, chills, loss of consciousness, areflexia, tonic-clonic convulsions.
Treatment: if necessary, conduct symptomatic therapy.The patient should be given a horizontal position with raised legs. The specific antidote is unknown. They monitor the vital functions of the body and general measures aimed at maintaining them, monitor the airway; with convulsions - diazepam.

When used together, Trental potentiates the action of a number of antihypertensive and hypoglycemic agents (both insulin and oral hypoglycemic drugs).
The simultaneous administration of pentoxifylline and theophylline may lead to an increase in theophylline levels in the blood and increase its side effects.