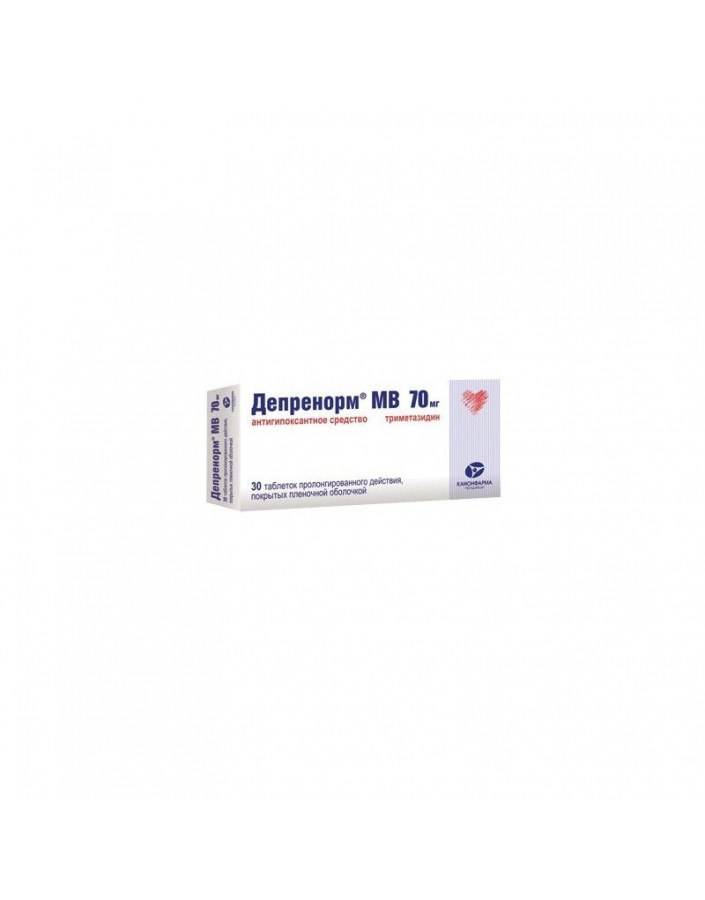 It has an antihypoxic effect. Trimetazidine prevents a decrease in the intracellular concentration of ATP by maintaining the energy metabolism of cells in a state of hypoxia. Thus, the drug ensures the normal functioning of membrane ion channels, transmembrane transfer of potassium and sodium ions and the preservation of cellular homeostasis.Trimetazidine inhibits fatty acid oxidation by selectively inhibiting the 3-ketoacyl-CoA thiolase enzyme in the mitochondrial long-chain fatty acid isoform, which leads to increased glucose oxidation and accelerated glycolysis with glucose oxidation and causes myocardial protection from ischemia. Switching energy metabolism from fatty acid oxidation to glucose oxidation underlies the pharmacological properties of trimetazidine.

It was experimentally confirmed that trimetazidine has the following properties:

- supports the energy metabolism of the heart and neurosensory tissues during ischemia;

- reduces the severity of intracellular acidosis and changes in transmembrane ion flow arising during ischemia;

- reduces the level of migration and infiltration of polynuclear neutrophils in ischemic and reperfused cardiac tissues;

- reduces the size of myocardial damage;

- does not have a direct impact on hemodynamic parameters.

In patients with angina pectoris, trimetazidine:

- increases coronary reserve, thereby slowing the onset of ischemia caused by exercise, starting from the 15th day of therapy;

- reduces the frequency of strokes and the need for taking short-acting Nitroglycerin;

- improves the contractile function of the left ventricle in patients with ischemic dysfunction.

After ingestion, trimetazidine is absorbed from the gastrointestinal tract, Tmax in the blood plasma - approximately 5 hours. Over 24 hours, the concentration in the blood plasma remains at a level exceeding 75% of the concentration determined after 11 hours. The equilibrium state is reached after 60 hours. Eating does not affect the bioavailability of trimetazidine.

Vd is 4.8 l / kg, which indicates a good distribution of trimetazidine in the tissues (the degree of binding to plasma proteins is rather low, about 16% in vitro).

Trimetazidine is excreted mainly by the kidneys, mainly unchanged.

The kidney clearance of trimetazidine directly correlates with creatinine clearance, and hepatic clearance decreases with the patient's age.

hypersensitivity to any of the components of the drug;

Data on the allocation of trimetazidine or its metabolites in breast milk are not available. The risk for a newborn / child cannot be excluded. Do not use the drug Deprenorm® MB while breastfeeding.

From the side of the central nervous system: often - dizziness, headache; unspecified frequency - symptoms of parkinsonism (tremor, akinesia, increased tone), instability in the Romberg position and shaky gait, restless leg syndrome, and other motor disturbances associated with them, usually reversible after discontinuation of therapy. Sleep disturbances (insomnia, drowsiness).

There are no data on the interaction with other drugs.

Deprenorm® MB take 1 tab. 70 mg once a day (in the morning). The course of treatment is recommended by the doctor.

Only limited information is available on trimetazidine overdose. In case of overdose, symptomatic therapy should be carried out.

Deprenorm® MB is not intended for the relief of strokes, the initial course of treatment of unstable angina or myocardial infarction, as well as in preparation for hospitalization or during its first days.

If an attack of angina occurs, the treatment (drug therapy or revascularization) should be reviewed and adapted.

The drug can cause or worsen the symptoms of parkinsonism (tremor, akinesia, increased tone), so you should regularly monitor patients, especially the elderly.

With the appearance of motor disorders such as parkinsonism symptoms, restless legs syndrome, tremor, instability in the Romberg position and unsteadiness of gait, the drug Deprenorm® MB should be permanently canceled.

Cases of falling associated with instability in the Romberg position and unsteady gait or arterial hypotension may be noted, especially in patients taking antihypertensive drugs (see “Side Effects”).

Influence on ability to drive vehicles and to perform the works demanding high speed of psychomotor reactions. In connection with the possible development of dizziness and other side effects when using the drug Deprenorm® MB should be careful when driving and other potentially hazardous activities that require high concentration of attention and psychomotor reactions.