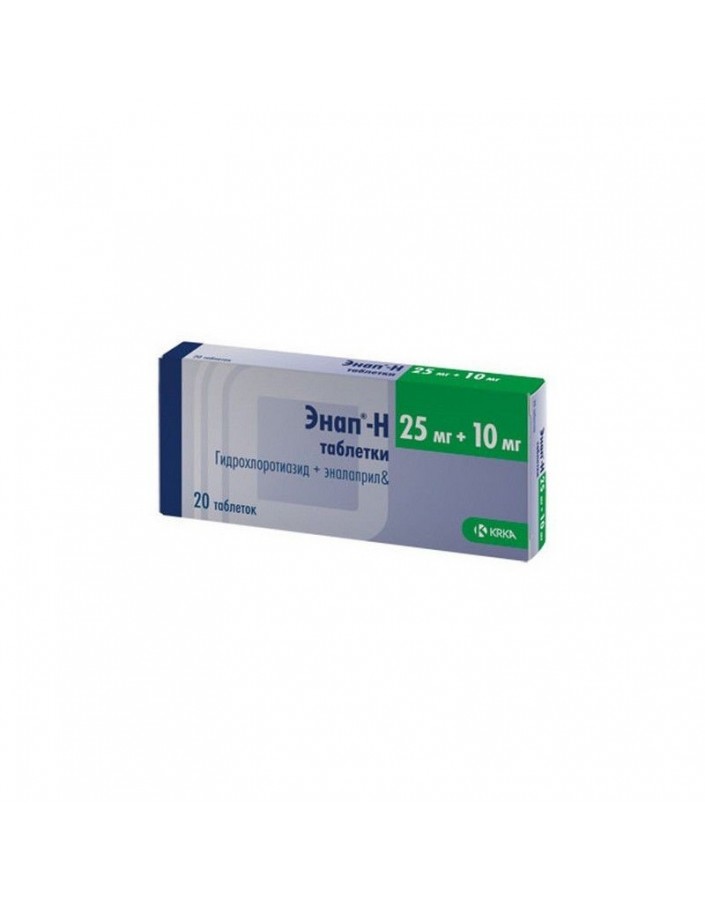 Enalapril maleate is an ACE inhibitor. Pharmacological activity has enalapril metabolite - enalaprilat. Suppresses the formation of angiotensin II and eliminates its vasoconstrictor action. Enap gradually lowers blood pressure without causing an increase in heart rate and minute volume. Reduces the round robin, reduces afterload. It also reduces preload, reduces pressure in the right atrium and the pulmonary circulation. The drug reduces left ventricular hypertrophy. Enap reduces the tone of the outgoing arteriole of the glomeruli of the kidneys, thereby improving intracellular hemodynamics, and prevents the development of diabetic nephropathy.
Enap does not affect the metabolism of glucose, lipoproteins, as well as sexual function.
The maximum effect of the drug is observed after 6-8 hours. The effect lasts for 24 hours.The overall therapeutic effect is achieved after several weeks of treatment.

Set individually depending on the condition of the patient.
In the treatment of hypertension the drug is prescribed in the initial dose of 5 mg / day. Dose adjustment is carried out depending on the achieved clinical effect. Typically, the maintenance daily dose ranges from 10-20 mg, in exceptional cases up to 40 mg in 1 or 2 doses. The initial dose for patients who received diuretics before the start of treatment with Enap is 2.5 mg 1 time / day.
In chronic heart failure The recommended initial dose of the drug is 2.5 mg 1 time / day. Increase the dose of the drug should be gradually until the maximum clinical effect; on average, it takes 2–4 weeks to select the optimal dose. The average maintenance dose is 2.5-10 mg / day in 1 dose, the maximum maintenance dose is 40 mg / day in 2 doses.
With asymptomatic dysfunction of the left ventricle The recommended initial dose of the drug is 2.5 mg 2 times / day; depending on the patient's condition, dose adjustment is possible. The average maintenance dose is 10 mg 2 times / day.
In the treatment of renovascular hypertension or in case of suspected renovascular hypertension treatment should be carried out by a physician experienced in the treatment of this disease.

If after one hour the clinical effect is unsatisfactory, you can re-enter the same dose, and after 6 hours continue treatment by prescribing a full dose (1.25 mg every 6 hours).
Anapa IV therapy usually lasts 48 hours. When switching to the oral form of treatment with Enap tablets, the recommended initial dose is 5 mg per day for patients who have previously been administered the usual doses of Enap by injection. If necessary, the dose may be increased. For patients who were treated with half the initial dose of Enap injections, the recommended dose of the drug when switching to the oral form is 2.5 mg per day.

In the treatment of hypertension in renal disease the dosing regimen is set depending on the severity of renal dysfunction or on the KK values. At QC more than 30 ml / min the initial dose is 5 mg / day, with QC less than 30 ml / min - 2.5 mg / day, the dose should be gradually increased until a satisfactory clinical effect is achieved.
Patients on hemodialysis on the day of dialysis, the drug is prescribed in a dose of 2.5 mg, on other days the dose is adjusted depending on the level of blood pressure.
Enapom treatment is carried out for a long time, usually throughout life. Drug therapy can reduce blood pressure and maintain it at the desired level. The use of the drug prevents or reduces the risk of the development of complications caused by arterial hypertension.
The drug should be taken at the same time of the day.
When you skip taking the next dose of the drug, you must take the missed dose as soon as possible. If the time of the next drug intake is approaching, you should skip the reception of the forgotten dose and take the next dose on time. In no case should not double the dose.
The drug can be taken regardless of the meal. pills should be swallowed whole, washed down with a small amount of liquid.

Cardiovascular: rarely, arterial hypotension (including orthostatic), syncope.
Nervous system: dizziness, headache, feeling of tiredness, weakness are possible; rarely - fainting.
Respiratory: often - dry cough (usually stops a few weeks after discontinuation of the drug), bronchospasm, rhinorrhea, pharyngitis.
Gastrointestinal: rarely - nausea, dry mouth, diarrhea, increased transaminase activity, cholestatic jaundice.
Allergic reactions: rarely, skin rash, angioedema.
Dermatologic: rarely - photosensitivity.
Urogenital: in some cases (especially in patients with baseline renal dysfunction or receiving diuretics) - reversible renal dysfunction, which is accompanied by an increase in the concentration of urea and creatinine in serum, proteinuria. After the cancellation of Enap, these indicators are normalized.
Hemic and lymphatic: rarely - anemia, leukopenia, thrombocytopenia, agranulocytosis.
Other: In the scientific literature, there were reports of the development of lupus-like syndrome (elevated body temperature, arthralgia, myalgia, serositis, vasculitis, increased ESR, leukocytosis, eosinophilia).
Side effects observed with the use of Enap, usually have a mild, transient nature and do not require discontinuation of the drug.

Enap is contraindicated for use during pregnancy and lactation (breastfeeding).
If pregnancy occurs during the treatment with Enap, the drug should be immediately discontinued.

During the course of treatment with Enap, the patient’s condition should be regularly monitored, especially at the beginning of treatment and / or when selecting the optimal individual dose of the drug.
It should be borne in mind the possibility of arterial hypotension (even a few hours after the first dose) in patients with severe heart failure, severe renal impairment, as well as in patients with water-electrolyte imbalance caused by treatment with diuretics, salt-free diets, diarrhea, vomiting, as well as in patients on hemodialysis.
With caution (due to the risk of arterial hypotension), the drug is prescribed to patients with coronary artery disease, severe cerebrovascular diseases, stenosis of the aortic mouth with impaired hemodynamics or other obstacles to the outflow of blood from the left ventricle.
Severe arterial hypotension is rare and transient. Transient hypotension is not a contraindication to the continuation of treatment. As soon as the pressure stabilizes, you can continue therapy with the drug in the average recommended doses.
If a patient with arterial hypertension was treated with diuretics, they should, if possible, be canceled 2-3 days before the start of treatment with Enap. Otherwise, the risk of arterial hypotension significantly increases. If diuretic cancellation is not possible, Enap should be used in reduced doses. In chronic heart failure, the dose of diuretics should be reduced.
The patient should be warned that if there is a recurrence of arterial hypotension, accompanied by nausea, increased heart rate and fainting, you should consult with your doctor.
Administration of the drug should be avoided in patients with bilateral renal artery stenosis or arterial stenosis of a single kidney.
Renal function should be monitored before starting treatment and during therapy.
It should be borne in mind that patients with diabetes with normoalbuminuria are prescribed Enap only after determining the functional renal reserve, with micro- and macroalbuminuria - without prior determination.
During treatment with Enap, an increase in serum potassium is possible, especially in patients with chronic renal insufficiency, diabetes mellitus, with the simultaneous administration of potassium-saving diuretics or potassium preparations.Such patients should be informed about the need to consult a doctor when muscle weakness and arrhythmia appear.
Patients receiving Enap should not drink alcohol due to the risk of arterial hypotension.
In the event of side effects or angioedema (sharp swelling of the lips, face, neck, arms and legs, accompanied by suffocation and hoarseness) Enap should be canceled and appropriate treatment should be prescribed.
The drug should be discontinued before examining the function of the parathyroid glands.
Prior to the planned surgery, the anesthesiologist should be informed that the patient is receiving Enap because there is a risk of arterial hypotension during general anesthesia.
It should be borne in mind that the treatment of Enap in patients who have shown dialysis, may develop allergic reactions due to the use of certain types of filter membranes used in hemodialysis or other types of blood filtration.
During the period of allergy treatment (desensitization) to wasp or bee venom in patients receiving Enap, a hypersensitivity reaction may develop.
Use in pediatrics
Do not prescribe the drug to children, because the effectiveness and safety of its use in pediatrics has not been studied.
Influence on ability to drive motor transport and control mechanisms
With caution, the drug is prescribed to patients engaged in potentially hazardous activities that require increased attention and speed of psychomotor reactions.

Symptoms: arterial hypotension.
Treatment: should give the patient a horizontal position with raised legs. Shown gastric lavage with the further appointment of Activated carbon . In more serious cases, in the conditions of a hospital, measures are taken to stabilize blood pressure: i.v. the introduction of saline or plasma substitutes. Perhaps the use of hemodialysis.

The preparation should be stored in the place protected from moisture at a temperature not above 25 ° C.