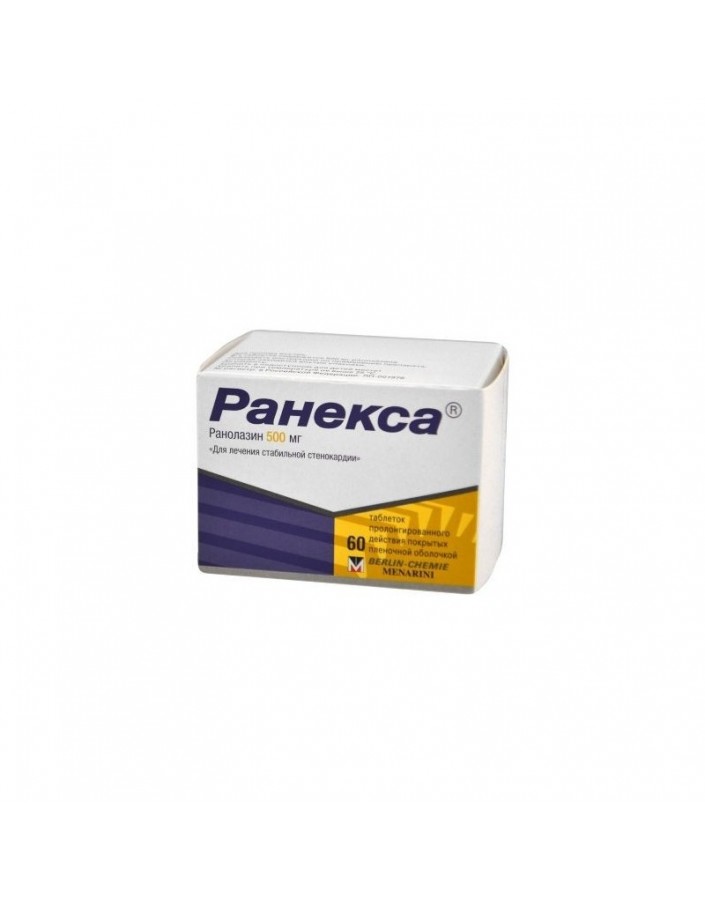 The mechanism of action of ranolazine is still largely unknown. Ranolazine may have some antianginal effect by inhibiting the late flow of sodium into myocardial cells. This reduces the intracellular accumulation of sodium and, therefore, reduces the excess intracellular Calcium ions. It is believed that ranolazine, by reducing late sodium flow, reduces intracellular ionic imbalance in ischemia. It can be expected that such a decrease in excess intracellular calcium, will help to relax the myocardium and, thus, reduce ventricular diastolic tension. Inhibition of late sodium current by the action of ranolazine is clinically manifested by a significant shortening of the QTc interval and a positive effect on diastolic relaxation, revealed by an open study involving 5 patients with prolonged QT syndrome (patients with LQT-3 syndrome who have SCN5A ΔKPQ mutations). These effects do not depend on a decrease in heart rate, blood pressure, or vasodilation.
Impact on hemodynamics:
Patients within the framework of controlled studies treated with ranolazine alone or in combination with other drugs intended for the treatment of adenocardia showed a minimal decrease in mean heart rate (<2 beats per minute) and mean systolic blood pressure (<3 mmHg).
Effects manifested in electrocardiography:
In patients treated with Ranex®, there was a prolongation of the QTc interval, depending on the dose and plasma concentration (about 6 ms with a dose of 1000 mg twice a day), a decrease in the amplitude of the T wave, and in some cases two-humped T teeth. These effects of ranolazine on the characteristics of an electrocardiogram taken from the surface of the body are believed to be the result of inhibition of fast potassium current, which prolongs the ventricular action potential, as well as inhibition of the late sodium current, which shortens the ventricle marketing action potential. A population analysis of pooled data from 1308 patients and healthy volunteers showed a mean QTc elongation from baseline of 2.4 ms per 1000 ng / ml of ranolazine in plasma. The lengthening rate was higher in patients with clinically significant hepatic insufficiency.

The physician should give the patient instructions for the medical use of the Ranexa drug and a card of medical information about the patient to inform him of the need to present a card and a list of medications to the attending physician at each visit.
Ranexa is ingested no matter the time of eating. Ranexa pills should be swallowed whole, not crushing, not breaking and not chewing.
It is not recommended to take two doses in one dose while skipping the dose.
Adults:
The recommended initial dose of the preparation of Raneks is 500 mg twice a day.After 2-4 weeks, if necessary, the dose can be increased to 1000 mg twice a day. The maximum recommended dose is 1000 mg twice a day.
If the patient develops side effects associated with treatment (for example, dizziness, nausea or vomiting), a dose reduction of the Ranexa drug to 500 mg is necessary. If the symptoms of side effects do not disappear after the dose reduction, it is necessary to cancel treatment with Ranexa.
Combined treatment with CYP3A4 inhibitors:
In patients treated with moderate-acting CYP3A4 inhibitors (for example, diltiazem, Fluconazole, erythromycin), careful and careful selection of the Ranexa preparation is recommended and the maximum dose of the drug is 500 mg twice a day.
The simultaneous appointment of Ranexa with potent inhibitors of CYP3A4 is contraindicated.

Low weight:
An increased incidence of side effects is characteristic of patients with low weight (≤ 60 kg). Selection of doses for patients in this group should be carried out with caution.
Congestive heart failure (CHF):
Selections for patients with moderate to severe CHF (classes NYHA III – IV) should be performed with caution.
Children:
The use of Ranex® in children and adolescents up to 18 years of age due to lack of safety and efficacy data is not recommended.

Side effects observed in patients receiving the drug Ranexa, usually characterized by mild or moderate severity and often develop during the first 2 weeks of treatment.Data on side effects were obtained during phase III clinical trials involving 1030 patients with chronic angina treated with Ranexa.
Often (from ³ 1/100 to <1/10):
- dizziness, headache
- constipation, nausea, vomiting
- asthenia
Sometimes (from ³ 1/1000 to <1/100):
- anorexia, loss of appetite, dehydration.
- anxiety, insomnia, confusion and hallucinations
- inhibition, syncope, hypesthesia, drowsiness, tremor, postural dizziness
- blurred vision, visual disorders
- dizziness, tinnitus
- hot flashes, hypotension
- shortness of breath, cough, nosebleeds
- abdominal pain, dry mouth, dyspepsia, flatulence, stomach discomfort
- itch, hyperhidrosis
- pain in the limbs, muscle cramps, swelling of the joints
- dysuria, hematuria, chromaturia
- fatigue, peripheral edema
- increased level of creatinine in the blood, increased level of urea in the blood, lengthening of the corrected QT interval, increase in the number of platelets or white blood cells, weight loss
Seldom (from ³ 1/10 000 to <1/1000):
- disorientation, amnesia, clouding of consciousness, loss of consciousness, parosmia
- hearing loss
- cold extremity, orthostatic hypotension
- feeling squeezing in the throat
- angioedema, allergic dermatitis, urticaria, cold sweat, rash
- pancreatitis, erosive duodenitis, oral hypesthesia
- erectile disfunction
- elevated levels of liver enzymes.
The side effect profile is generally similar to that obtained in the MERLIN-TIMI 36 study. This long-term study also reported the occurrence of acute renal failure, with a frequency of less than 1%, in patients who received placebo and ranolazine. Evaluations for patients who may be at high risk for side effects of other drugs used to treat angina, that is, patients with diabetes, classes I and II heart attacks or obstructive respiratory diseases, confirmed that these conditions were not associated with a clinically significant increase in the incidence of side effects.
Older age, renal failure and low weight: In general, side effects occurred more often among elderly patients and patients with renal insufficiency; however, the types of phenomena in these subgroups were similar to those observed in the general population. Of the most frequently observed events, the following reactions occurred when taking Ranex® (placebo-controlled frequencies) more often in the elderly (³ 75 years) than in younger patients (<75 years): constipation (8% and 5%), nausea (6% and 3%), hypotension (5% and 1%), vomiting (4% and 1%).
In patients with mild to moderate renal insufficiency (creatinine clearance ³ 30–80 ml / min) compared with patients with normal renal function (creatinine clearance> 80 ml / min) among the most common occurrences (with an indication of placebo-corrected frequencies) include: constipation (8% and 4%), nausea (7% and 5%), vomiting (4% and 2%).
Typically, the type and frequency of side effects observed in patients with low body mass (≤ 60 kg) were similar to those observed in patients with higher body mass (> 60 kg); however, the placebo-corrected frequencies of the following frequent side effects were higher in patients with low body weight: nausea (14% and 2%), vomiting (6% and 1%), arterial hypotension (4% and 2%).
Changes in laboratory parameters: In healthy people and patients treated with Ranex®, there was a slight, non-clinical significance, reversible increase in serum creatinine levels. Renal toxicity was not associated with the development of a reversible increase in serum creatinine levels. Studies of the renal function of healthy volunteers showed a decrease in creatinine clearance in the absence of changes in glomerular filtration rate, consistent with inhibition of renal tubular creatinine secretion.
Post-marketing experience:
As part of the post-marketing experience, there were no reports of the onset of acute renal failure, including in patients with a pre-existing decline in mild or moderate severity of renal function and / or drugs that were known to interact with the Ranexa drug, which are characterized by known interaction with ranolazine.

Effect of ranolazine on other drugs:
Ranolazine is an inhibitor of P-gp (moderate to strong effect) and a weak inhibitor of CYP3A4, and may increase plasma concentrations of P-gp or CYP3A4 substrates. The distribution of drugs transported by P-gp may increase.
The available evidence suggests that ranolazine is a weak CYP2D6 inhibitor. Taking Ranexa 750mg twice daily increases plasma concentration of Metoprolol 1.8 times. Therefore, when administered jointly with Ranexa, the effect of metoprolol or other CYP2D6 substrates (for example, propafenone and flecainid or, to a lesser extent, tricyclic antidepressants and antipsychotics) may increase, resulting in a reduction in the dose of these drugs.
The potential for inhibition of CYP2B6 is undetermined. Caution should be taken when prescribing with CYP2B6 substrates (for example, bupropion, efavirenz, cyclophosphamide).
Digoxin : There is evidence of an increase in the concentration of digoxin in blood plasma by an average of 1.5 times with the co-administration of digoxin and Ranex®. Therefore, it is necessary to monitor the level of digoxin at the beginning and at the end of therapy with Ranex®.
Simvastatin : The metabolism and clearance of simvastatin is highly dependent on CYP3A4. Taking Ranex® 1000 mg twice a day increases the concentration of simvastatin lactone, simvastatinic acid and the activity of the HMG-CoA reductase inhibitor 1.4-1.6 times.
There is a theoretical risk that with simultaneous treatment with ranolazine and other drugs that prolong the QTc interval, pharmacodynamic interactions may occur and the risk of ventricular arrhythmias may increase. Such drugs include certain antihistamines (for example, terfenadine, astemizole, mizolastine), antiarrhythmic drugs (for example, quinidine, disopyramide, procainamide), erythromycin, and tricyclic antidepressants (for example, imipramine, doxepin, amitriptyline).

Symptoms: In the study of high-dose tolerability when ingesting in patients with angina, the incidence of dizziness, nausea, and vomiting increased with dose.In the study of the effects of overdose on intravenous administration on healthy volunteers, in addition to these side effects, double vision, lethargy and syncope were noted.
Treatment: In case of overdose, the patient should be carefully monitored, symptomatic and supportive treatment is recommended.
Since about 62% of ranolazine is associated with blood plasma, hemodialysis is ineffective.