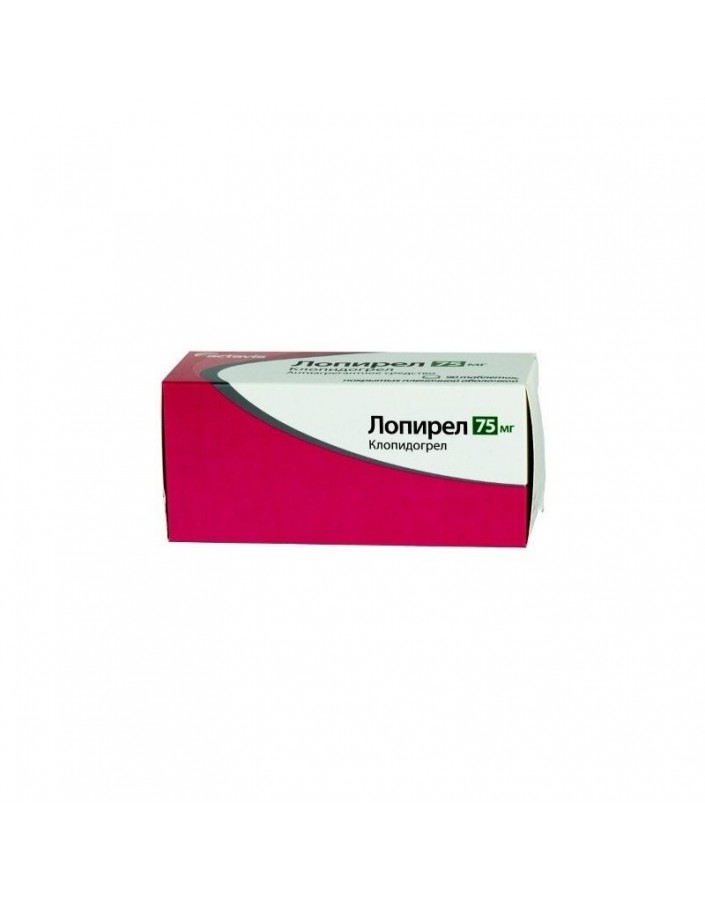 Lopirel take orally. In case of myocardial infarction, ischemic stroke or occlusion of peripheral arteries - 75 mg 1 time per day, regardless of the meal. Treatment should begin in terms from several days to 35 days in patients after myocardial infarction and from 7 days to 6 months in patients after ischemic stroke.
In acute coronary syndrome without ST segment elevation (unstable angina, myocardial infarction without Q wave) - start with a single dose of the loading dose (300 mg), then 75 mg once a day (in combination with acetylsalicylic acid). The maximum beneficial effect occurs after 3 months of treatment. The course of treatment is up to 1 year.
In acute coronary syndrome with ST segment elevation (acute myocardial infarction) - 75 mg 1 time per day with an initial single dose of a loading dose in combination with acetylsalicylic acid and thrombolytics (or without thrombolytics). Combination therapy begins as soon as possible after the onset of symptoms and continues for at least 4 weeks.
In patients older than 75 years, treatment with clopidogrel should begin without a loading dose.

In patients with acute myocardial infarction with ST-segment elevation, treatment with clopidogrel should not be initiated during the first few days after myocardial infarction. Due to the lack of clinical data, clopidogrel is not recommended for use with. acute ischemic stroke (less than 7 days). With the development of bleeding during drug treatment, it is necessary to immediately conduct a clinical analysis of blood (APTT, platelet count, tests of the functional activity of platelets) and functional activity of the liver.
Like other antithrombotic drugs, clopidogrel should be used with caution in patients with an increased risk of bleeding due to trauma, surgical interventions or pathological conditions, as well as in the case of the combined use of clopidogrel with acetylsalicylic acid, NSAIDs, Heparin, glycoprotein IIb / IIIa inhibitors or thrombolytics. Severe cases of bleeding were noted in patients taking clopidogrel simultaneously with acetylsalicylic acid or with acetylsalicylic acid and heparin.
In the case of surgical interventions, if the antiplatelet effect is undesirable, treatment with clopidogrel should be stopped 7 days before the operation.
Patients should be warned that they should inform the doctor about each case of bleeding. Careful monitoring of the condition of patients is necessary to detect signs of bleeding, including hidden bleeding, especially during the first weeks of treatment and / or after invasive cardiac procedures or surgery.
Clopidogrel increases bleeding time and should be used with caution in patients at risk of bleeding (especially gastrointestinal and intraocular). Patients should be warned that since stopping the bleeding that occurs on the background (both as monotherapy and in combination with acetylsalicylic acid) takes a long time, they should inform the doctor about each unusual case (in terms of location and / or duration). a) bleeding. Patients should also inform the doctor and dentist about taking the drug if they are to undergo surgery or if the doctor prescribes a new drug for the patient.

May indicate an increase in bleeding time. There is no specific antidote. If rapid correction of increased bleeding time is necessary, the effect of clopidogrel can be eliminated by platelet transfusions.