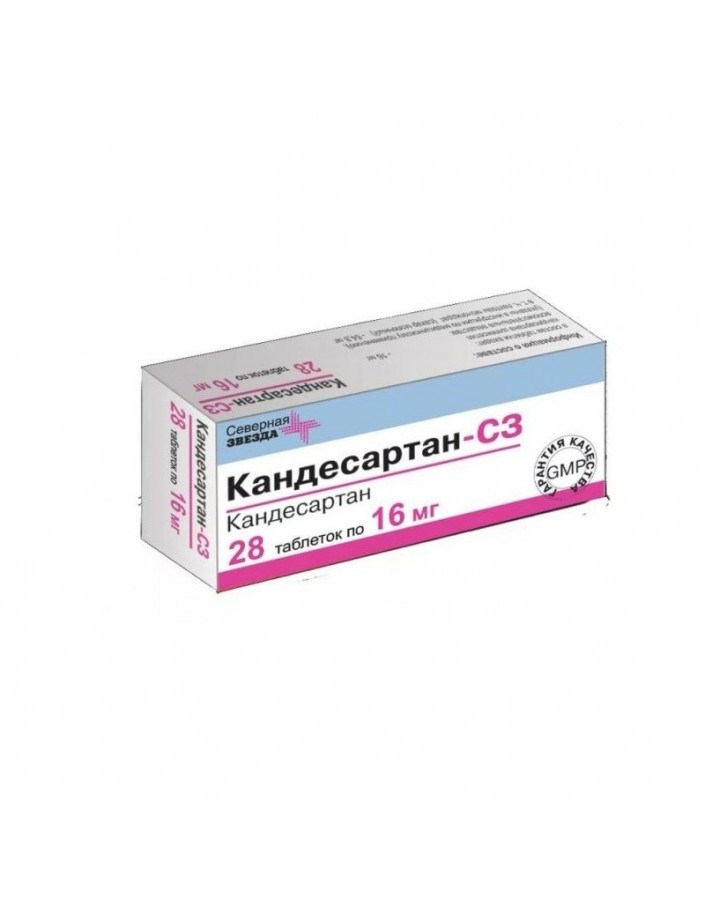 Angiotensin II receptor blocker (selectively acts on AT1 receptors, forms a strong link with them, followed by slow dissociation). It has a vasodilating, hypotensive and diuretic effect. Does not exhibit the properties of an agonist (does not affect the ACE and does not lead to the accumulation of bradykinin or substance P, does not bind to the receptors of other hormones, does not affect the state of the ion channels involved in the regulation of CVS activity). As a result of blocking the AT1 receptor angiotensin II, a compensatory dose-dependent increase in the activity of renin, the concentration of angiotensin I, angiotensin II and a decrease in the concentration of aldosterone in plasma occurs. The hypotensive effect is due to the decrease in OPSS, while there is no effect on heart rate.
Increases the renal blood flow (does not change or increases the glomerular filtration rate), reduces vascular resistance in the kidneys and the filtration fraction.
Does not affect the concentration of glucose and the composition of lipids in the blood. Provides dose-dependent, smooth decrease in blood pressure.
The onset of hypotensive action after taking the first dose usually develops within 2 hours, the duration of the effect is 24 hours. With ongoing therapy with a fixed dose of the drug, the maximum decrease in blood pressure is usually achieved within 2-4 weeks andpersists throughout the treatment.
Age and gender do not affect the effectiveness of the drug.

Before and during treatment, control of blood pressure, kidney function (plasma creatinine), serum concentrations of K +, Li + (with the combined use of drugs) is necessary.
In patients with reduced BCC (including as a result of diuretic therapy), while limiting salt intake, during dialysis, with diarrhea and vomiting, symptomatic hypotension may develop.
Transient arterial hypotension is not a contraindication for further treatment after stabilization of blood pressure. In the case of recurrence of severe hypotension, reduce the dose or discontinue the drug.
Patients in whom vascular tone and renal function are primarily dependent on the activity of the RAAS (for example, patients with decompensated CHF or kidney disease, including renal artery stenosis), are particularly sensitive to drugs acting on the RAAS. The appointment of such drugs is accompanied in these patients with severe arterial hypotension, azotemia, oliguria and, less commonly, acute renal failure.
A sharp decrease in blood pressure (in patients with ischemic cardiopathy or cerebrovascular diseases of ischemic genesis) when using antihypertensive drugs can lead to the development of myocardial infarction or stroke.
Compared with ACE inhibitors, cough development is less common.
In case of insufficient severity of BP reduction, a combination with a thiazide diuretic is recommended.
During the period of treatment, care must be taken when driving and engaging in other potentially hazardous activities that require increased concentration and psychomotor reactions.

The drug should be taken orally, in the initial dose - 8 mg 1 time a day, regardless of the meal. If necessary, increase the dose to 16 mg.
Patients with renal insufficiency (CC less than 30 ml / min), severely impaired liver function and / or cholestasis, the initial dose is 4 mg.

On the part of the digestive system: nausea.
On the part of the respiratory system: cough, infections of the upper respiratory tract, pharyngitis, rhinitis.
On the part of the musculoskeletal system: back pain, arthralgia, myalgia.
Of the nervous system: dizziness, headache.
From the side of blood formation organs: extremely rare - leukopenia, neutropenia, agranulocytosis, thrombocytopenia.
Allergic reactions: angioedema, urticaria, pruritus.
Laboratory indicators: increased activity of ALT, hyperuricemia.
Other: gout, "flush" of blood to the skin of the face.